These Are Special Days, Indeed

Well, Mr. Tearful did not go down to Ocala due to circumstances beyond every one's control but I still got to see him and Yolie again today and now we're making plans to go to the Junior Museum tomorrow with ALL of my children and the grands. I'm even trying to convince Lily to keep Owen out of school so he can go too. I never was a big believer that kids had to be in school every time the doors opened and I know for a fact that many of the days I let my children stay out to do other things are the source of some of their best childhood memories.
It was a rare occurrence which made it all the more special.
But I do not want to cause Lily any emotional distress.
And she is the mama. Not me.

So. I found my coobie bra today. All of the mysteries have been solved. I found it when I was looking for a pair of pants I was missing. Found those too.

Note to self: When something is missing, look in the space between the stove and counter and/or in my shirt drawer.

It might be that I need to organize my life a little better.
You think?

It's been a good day and I'm looking forward to tomorrow.

I just feel so damn lucky.

And here's a picture that pretty much sums it all up. 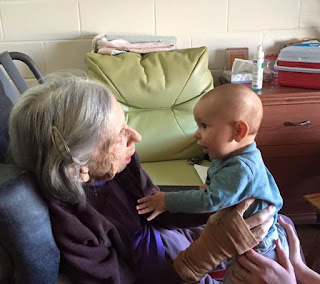 Jessie and Vergil took August to meet his great-grandmother. Vergil's grandma. She has always been extremely important in Vergil's life and she was there the night that I believe my daughter fell in love with her grandson. At the rehearsal supper the night before their wedding, she told me the story. How all these different ladies had set their cap for Vergil at the Swannanoa Gathering which Jessie was attending due to the efforts of her fairy godparents, Lon and Lis. There was a dance and when Jessie and Vergil began to dance together, all the other girls just had to step back.
And the next day, I think, I got a message from Jessie saying, "I met a guy..."
And here we are.
Jessie said on Facebook that she kept trying to just hold August up so that his great-grandma could see him but that she just kept reaching her arms out to him. She wanted to hold him. 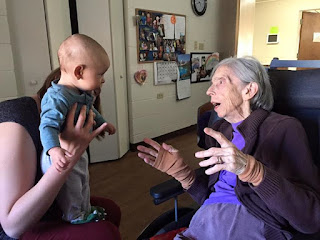 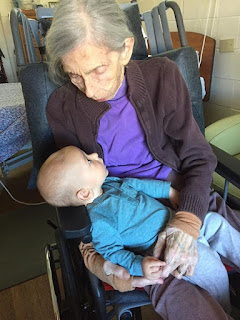 Scott and I agreed today that it is so good that we have met in the "meat" world as Rebecca says.

There are many worlds. Probably more than we can imagine.

But there is nothing like the great good grace of being able to reach out and actually touch the warmth of people we love, no matter if they are blood kin or some other, more mysterious kind of kin.

When I am truly, truly old- if I should live that long, which I doubt I will- I hope with all of my heart that someone brings me a baby to look at in the eyes, to share all of that which cannot be said in words, and then to hold him or her.
And to be able to touch and be touched by those I love.

What more could any of us ask for?