Forks In Cracks And Cats In Trees 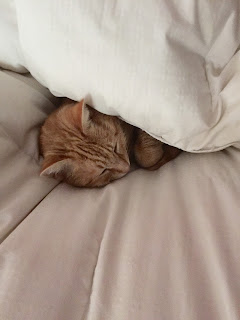 Once again I blame the cat for keeping me in bed. I mean...could YOU get out of a bed with that going on? And darn that cat! She's started throwing herself against the window to gain entrance to the inside again instead of going around the house and entering the cat door.
Cats are not stupid. Why go those extra steps when a stumbling, bumbling half-awake human will get up and open the door?

Saturday. It's another gorgeous day here in Lloyd. Mick is crowing and we just finished our breakfast and guess what? The simmer mat mystery has finally been solved!

Last week when I was cooking bacon and making pancakes I dropped not one but two forks down the crack between the stove and the counter top. 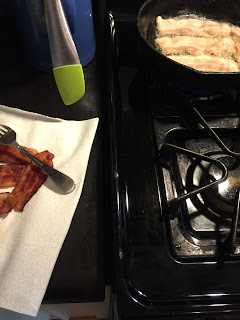 I had never dropped a fork down there in my life but on that day, it happened twice. For some reason, my supply of full-sized forks had already shrunk to almost nothing so the loss of two was extreme. I have about fifty salad-forks (and don't ask me why- I have no idea) and if dinner involved more than five, someone was going to be eating with one of those.
Now we can only have three adults at table, I guess.
So I got out the flashlight this morning when I was cooking our breakfast and looked down the crack and yes, you can see the forks and then Mr. Moon pulled out the drawer at the bottom of the stove and through the horrible mess of grossness under there, spied a simmer mat as well as the forks.
And no, he could not get to them. So this means that we'll have to pull the stove out eventually, I guess.

Speaking of cats and missing items which are difficult to retrieve, do you remember Rusty, the feral cat I rescued a few years ago? That darling little puff of orange?
Well, he has been Lily's pet ever since and has spent most of his life either hunting lizards in the windows or lying on the bed but recently, he's decided to explore the great outdoors.
This morning Mr. Moon got a text from Jason asking if he had a sixty-foot ladder.
"No," Mr. Moon texted back. "Why?" 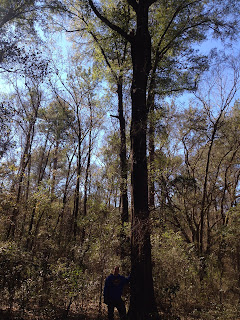 Can you see the cat? No branches, no nothing until you get up to the point where the cat is perched, terrified to try and make it down. Lily's not even sure how long he's been up there. A day?
Ooh boy.
Family crisis.
Of course I've researched this problem on the internet and either cats always finally come down or else they don't. Also, don't let your father try to shoot the branch the cat is on to make it fall. This leads to certain cat-death. Jessie has suggested that since Owen has his cast off, we could put a harness on him and let him monkey up the tree.
I'm pretty sure she's not serious.

Well, Mr. Moon may pack up the longest ladder he has. This could be fun. I think I'll go with him. I got the boys a little Valentine's treat anyway. And I haven't seen Magnolia in two days. So.

I shall keep you apprised of the situation.