I Have Something In My Eyes

Aw, I've been a right weepy old bitch today. Everything has made me cry but not in a particularly bad way. Just heart-leaks, I think. The last thing that made me weep was a post on Facebook from the White House of Obama saying "We know it is Black History Month when you hear somebody say, 'Heyyyy, Michelle! Giiiirrrrllll, you look so good!'"

And why that made me tear up, I do not know except that I think about how remarkably lucky this country has been to have that man as our President, his wife as our First Lady.
Okay. I can't talk about it any more. I'll burst into real tears and there's just no reason for that.

It's Friday night and we're going to have a martini and it was a good day, despite the eye-leaking. We ate our lunch at the Indian restaurant I talked about recently and I was gratified to see that it was packed today. Gibson loves naan and he loved the rose milk shake and he ate some cantaloupe and a little bit of butter chicken and Maggie was wearing all pink, a ballerina onesie that Lily's best friend got her and she slept through the meal, the Bollywood music blaring out of the speakers and Gibson kept giving me good hugs and kisses for no other reason than that he wanted to.

We met back here after Lily picked up Owen and waited for the Amtrak train. We were going to go down to the old station to wave but Maggie was hungry and we thought we had time because Jessie had texted me when the train left the Tallahassee station where she and Vergil and August had gathered with a lot of other Tallahassee people to greet the train and cheer when the train stopped for a few moments. My ex and his wife were there too and got this picture which, is pretty stunning if you ask me. 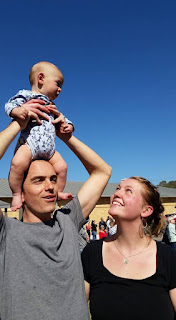 This is a big deal for all of us because they haven't run a passenger line through here since Hurricane Katrina tore up so much track but it's all repaired now and it would be such a very cool thing if we could get a train in Tallahassee.

Anyway...just as we were getting ready to head down to the train station/post office, we heard the whistle and Owen was the only one who got out into the yard in a clear area to wave, although we rushed. He had already been in the back yard and he stood and waved and he claimed that one person waved back.
I hope so.
My big boy. Waving at the train.
And then I pushed the boys in the swings and and they played a game wherein they pretended to be old men, in turn, walking across the path of the swing and no one got hurt and then Owen climbed the fig tree as he has always done but he is too big now, even though the tree has gotten bigger too.
Both of the boys decided to take off their shirts and show off their muscles and Lily and I laughed and laughed and Maggie sat in her mama's lap in the sunshine and the boys played another game which involved running towards the slide and then running up it and Owen, at six, is graceful like a little lynx and can run all the way to the top and Gibson, who is three (almost four!) ran like a little man-truck and would do a full stop before he climbed the slide in his Spider Man boots and Lily and I laughed some more and we clapped and told them both how big and strong they were.
Then Boppy got home and he held Magnolia for awhile before they left.

Oh dear god. I don't even know what I've written here but the frogs are singing so loudly although not as deafeningly as they will be in a month. The sun has set and Mr. Moon has gone out to put the chickens up and he just asked me if it isn't almost time to get some new baby chicks.

I need to make supper and babies make everything better, whether human or poultry.
Oh Lord. I'm tearing up again.

A belated happy Friday, y'all.