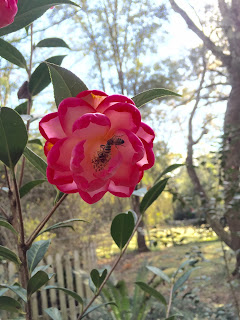 I went to pluck this camellia this morning but noticed a bee was having her with it so I decided to take a picture instead. And then I realized that not just one bee, but three, were in its delicate depths.
The bees are swarming this variety but none other.
They are obviously not only beautiful to me.

I woke up this morning feeling as if perhaps anxiety had come by in the night, so stealthily, as it does, and tenderly licked my face. It is hard to explain this. But it is real. It is not bad and I took a quick but hard walk, fast, fast, and Gibson is coming over soon.

I swear. Maurice is playing with the chickens. I don't think that Mick understands this concept but I am quite certain that Maurice most definitely does. She pretend-stalks them but instead of leaping on them, she runs with them, her bell tinkling as she goes. The chickens don't seem perturbed in the least. They are used to her orange cat ways.

It was supposed to rain this morning, according to last night's weather widget on my phone. Instead, it is warm and beautiful. I wonder if bees make love to flowers on rainy days. I also wonder how much honey is in that big oak where the huge branch split off years ago. I know they have made a home in there. I see them swarm it.

There is so very much I do not know or understand. Some times this troubles me. Other times, it merely amuses and amazes me.
It is, somehow, reassuring. Boredom is never an option. My place here on earth is so minute.

As Shakespeare said so long ago, "There are more things in heaven and earth, Horatio/Then are dreamt of in your philosophy."