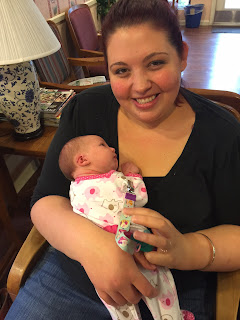 Yes, I am here! All is well in Lloydville. I went to Magnolia's appointment for her two-week well baby check with her mama and her brother today. The appointment was at 9:15 and we had to drop Owen off at school before that happened. I had told Lily that I might go with her, seeing as how the hour was so unreasonable and yet, also knowing that this would be her first day to have to get Owen to school on her own and deal with the other two children. I went through quite a bit of angst about it last night, in fact, saying things to Mr. Moon like, "She can do it by herself. She is a grown woman and a great mother." Etc.
And he kept saying, "Yes, yes. She can do it without you. There is no reason for you to go." This from the man who had taken Owen to school himself that very morning.
Anyway, when I woke up a little before six this morning and heard rain literally thundering down onto the roof, I determined that I would NOT go but of course I ended up going because I have to work these things out in my head. Is it a message to my daughters if I help them with things like this that I do not think they are capable of doing them on their own?
God. I hope not because in my heart of hearts I know that they are more than capable. Lily's ability to handle all three of her children at once astounds me and of course August is like a new limb of Jessie's which she has known all of her life would show up and she knows perfectly well how to attend.
Is it that I had so very little help when my children were babies and I know how hard it can be to do the simplest things like go to the grocery store with them and take them to doctors' appointments?
Is it guilt that I need to do the very best for them that a mother can do?

I have no idea but there was no way I was going to let Lily make that trip to town with Maggie possibly crying in the back seat and Gibson possibly fussing and in all that rain! And so I crossed the ponds in the yard and drove to Lily's and we took Owen to school. He always sits beside his baby sister in the back seat and gives her the pacifier if she wants it and does a very mature job of calming her if she needs it. I am most proud of that boy. I took his place after we dropped him off and we drove to town with Gibson saying, "Hurry, Mama!"
He loves the doctors' office (same doctor as the one Jessie takes August to) because there are books and toys and a playhouse, right in the waiting room! He sees it as a playground to enjoy. 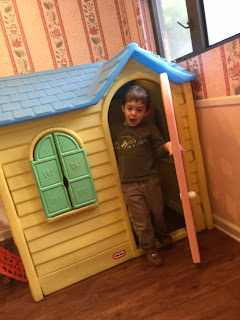 He told me to knock on the door and ask if I could wash my hands. There is a play sink in the play kitchen in the play house. So I followed his instructions.
"Hello! I need to wash my hands," I said.
"You've come to the right place!" he said joyfully, flinging open the door.
Unfortunately, it was a bit small for me to enter to wash my hands so I sat back down to read the newspaper while Lily and Magnolia were back in the exam room. Before too long, the waiting room was filled with sick people of all ages. Gibson immediately made friends with a boy who joined him in the playhouse. I heard him say, "I'll ask my Mer," and then he came to the door, peeked out and said, "How old am I?"
"Three," I told him.
"Three," he announced to the boy.
The boy looked a bit peaked so I asked his father if he was actually sick.
"Yes," he said. "But nothing too serious."
"Could it be Strep?" I asked, knowing that it is going around with ferocity. My friend Kati recently got it and referred to it as a strepodemic.
"It could be," the father admitted and then he called his son to come back and sit with him and Gibson was sorely sad.
And it was not even the father at fault. As much as I love this doctor's office with its vastly differing cliental, they need a well-room for children. I should have just stayed with Gibson at the house but hindsight, as they say...
After the appointment (and Maggie is fine), we met Jessie at the mall which was bizarre but there is a Starbucks right by the kids' play area and so we all had our caffeine and watched Gibson play with the other children, some of whom probably are also sick, smearing their viral-and-bacteria-laden secretions on all of the play things but what are you going to do? 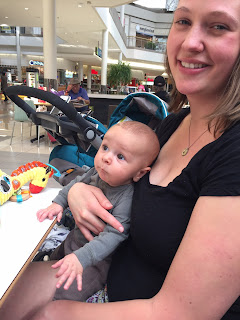 August is doing well, by the way, and feeling fine again.

After awhile, Jason met us there too. He had gotten sent home from work because he has had too many hours this week and I ended up taking his car back to their house to get my car because they wanted to go have lunch and I just wanted to come home.
Which I did. And then took a marvelous nap.

And so that's what I've been doing. More of the same-same, and glad to be doing it, despite my ever-present angst. Tomorrow we are going to go look for May a wedding dress and Lily and Jessie bridesmaid dresses. Mr. Moon and Vergil are going to start putting the metal back on the roof over the work they've done on it.

There is so much more I could discuss here including Sarah Palin and the speech she made the other night, the new theory I read about why so many Americans are supporting Donald Trump (he's the daddy they all want- "Because I said so. Shut up and go to bed."), the delicious curry and naan bread I made last night, the new LED light fixture my husband installed above the sink last night which is so bright that I've had to hang a bit of a curtain to diffuse it, 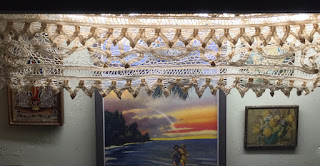 the way the new leaves of the begonia in the mudroom jungle look when the afternoon sun pours in, 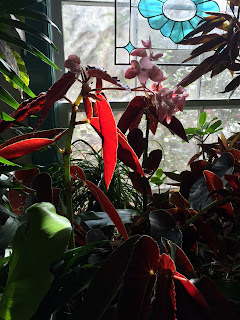 and how I hope that all of you affected by this huge snowstorm on the east coast are safe and cozy and that your power does not go out but that is enough and martinis are being involved and I need to go make a salad and cook potatoes.

Happy Friday to you all.