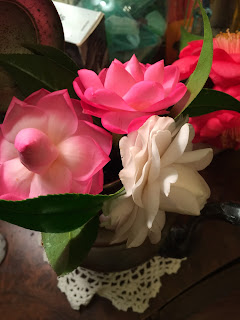 When I first met Mr. Moon in 1983, I couldn't imagine even dating him. We were as different as cheese and chalk. He was what I called a "jock" and I was what I still call a "hippy." He was 6'10" and I was 5'4". I loved to read then as much as I do now and reading was not on his agenda. He hunted; I was the next best thing to a vegetarian. He was extremely close to his loving family. I kept my distance from my dysfunctional family and couldn't understand anyone loving his parents so much. He was eternally cheerful, happy, and optimistic and I was struggling out of the second or third clinical depression of my life.
He and I were both recently divorced but he had a dog and a truck and I had two kids and a house and was in nursing school. I think he'd been loving his single-man status and me? Well, honey, I had kissed so many toads.
Some of them admittedly darling toads, some even beautiful, but still- toads.

And yet- we did date, or rather, we met and he wooed me and the next thing I knew, he was living with me and had built a fence around my back yard to keep his dog in.
Supposedly.
I knew. I knew in my heart that he was the mythical good man and that he would treat me so well and my children too and so I accepted him into my life and he took on responsibility like nobody's business and next thing I knew, I was truly in love with him and he had to woo my women friends and I had to meet his family and they took me in as if I was their own. My kids, too, whom they embraced as sweetly and profoundly as if they'd been blood.
And my women friends, they too, fell in love with him eventually, over time.

We married a year later and a year after that we had our first child together and that was Lily and then three and a half years later we had Jessie and we were all a family and he'd started a business with his father's hands-on help and we worked so hard, keeping it all together and raising this family and he supported us and kept us going and I began to know what love really is.
We went through a lot together in those early years. Way too much, really. The business, the babies, the healing I've had to so painfully do from childhood trauma, the deaths of his parents, the death of one of those women friends of mine he'd had to woo. We were with her when she died and the day she died, she, for some reason known only to her, had to move house and when her bed was set up in her new place, she asked my husband to hold her like a baby, to carry her to the car to take her there, and he did and he carried her in his arms and set her in her bed and she died a few hours later and we were right there with two other friends, holding her and stroking her and it was one of the most profound experiences I've ever had in my life.

That's just a little bit of the things we've gone through together. We've raised all these children, we've danced at their weddings, we've been at the births of their children. We've moved and moved again. He's started more businesses and is still working hard and we are as involved in the lives of our children as ever.

And sometimes (today) I look at him and hold him and am held by him and I think of what I might have passed up because he seemed so very different and not at all like someone I'd ever imagined being married to.
And I cry a little at the wonder of the gift of him in my life.
He is so beautiful to me, this man.
His kindness, his strength, his heart are huge.

We're still chalk and cheese in so many ways. We always will be.
So what?
Frankly, I don't want to be married to someone who is exactly like me. Where's the fun in that? It still makes me laugh to see my hand in his giant one. To see my shoes lined up next to his. To know that while I still love to read, he still loves to do.
And in the ways that really matter- in values, in heart, in love of home and family, we are so very much alike.

All right. I'm going to go make that man's supper now.
I am and always will be stupefied and astonished at how lucky I am.
And he still makes me laugh. Which may be the best thing of all.

One time, when things grew so very difficult between us, I told him that of all the women in the world who could have loved him and would have loved him, no one could love him for being exactly who he is the way I could.
I still think that is true. And I think he feels that way about me.