Santa Does Not Have Chicken Powers 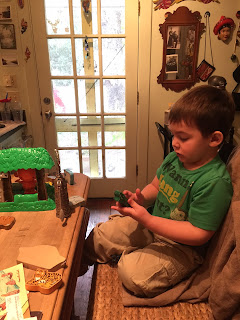 When Lily and Jason took Owen in to get his arm X-rayed again, the belief and hope was that all would be well and he could get a short cast and Bob's your uncle.
But no. The X-ray showed that the fracture is not healing correctly and so they recasted him and tomorrow he goes back at 8:00 a.m. for surgery to reset the bone and have pins put in.
Not what anyone wanted to hear.
I'm sure he'll be fine but glory be! So much for him and this little family.
Boppy's going to go stay with Gibson in the morning and I'm going to go meet Lily and Maggie and Jason and Owen at the clinic where they do the surgery and stay with them until at least 10:00 when I am supposed to go meet Jessie at our friend Melissa's for hair cuts.
Ooh boy.
And so it goes and so forth and we are still planning on going to Apalachicola in the afternoon if all goes well, which I am sure it will. Mr. Moon is already packed and I have made a good start.

Gibson was a precious boy this afternoon. He can play by himself with little characters and animals and the beloved Bacchus headed corkscrew if he gets the chance for long spaces of time. He makes up entire scenarios involving everyone with sound effects and explanations to them all. Will he grow up to be a writer? A director? Who knows? But it sure is fascinating to watch.
At one point today, he looked at a card I have taped to the kitchen hutch which has a picture of an Elvis-looking rooster on it.
"That Elvis?" he asked.
"No, it's just a rooster who looks like Elvis."
"Elvis is dead," he said sadly. "He just died. I wish I could see him again."
"I know, honey," I said. "I miss him too."
His face brightened and he said, "I'll ask Santa to bring him back next Christmas!"
"Oh, baby. It doesn't work like that."
"Santa doesn't have chicken powers?"
"No. He doesn't."
"Oh," he said. His face grew sad again and we discussed where Elvis is buried and the conversation moved on.
He helped me make cookies and then bread dough, lifting the lever of the mixer for me, adding ingredients.
"I such a good helper," he said.
"Yes you are," I told him. And after we had mixed up the cookies he licked the beater and was covered in chocolate and we had to get out Mr. Washcloth, a character that I invented. Mr. Washcloth is eternally hungry, not only for cookie dough but for the dirt that boys get on their hands and faces.
"No, no, Mr. Washcloth!" Gibson cried with great and effective drama as I approached him with the washcloth draped over my hand like a puppet. But he was giggling and Mr. Washcloth got his fill of cookie dough too.
And so it was a good afternoon and I even got a little nap while Gibson watched videos on the bed on my phone beside me.

When they came to pick Gibson up, I told Owen how sorry I was about his arm.
"At least I'll be asleep," he said.
"Yep," I told him. "It won't hurt you."
"How you arm?" Gibson asked him after Owen had discovered where he was hiding. The boys always hide when their parents come to pick them up. As Owen might say, it never gets old.
"Not good," said Owen. "I have to get surgery."
My heart clutched. But what are you going to do? Better than in the old days where when you broke a bone, they set it, cast it, and that was that until the proscribed time for healing had passed and they took the cast off and bid you good-bye. The wrist I broke when I was seventeen has bothered me ever since the day I broke it and after I did some knitting the other night, woke me up repeatedly.

Mr. Moon is home and leftover soup is warming up and bread is rising. It's not going to be my best bread. I tried to put too much oat bran in it and it's going to be what I affectionally call "sturdy." "Wholesome" would be another word as would "dense," "hearty," and perhaps "chewy."
Oh well.
Perhaps tomorrow night we'll be eating at the soulful seafood restaurant we discovered last time we were in Apalach, where the shrimp are perfect, the hushpuppies are not sturdy, and the mullet is ethereally heavenly.
Praise the Lord and pass the Crystal hot sauce.

A day in the life.