Suffer The Little Children To Come Unto Me

I keep thinking about this new ruling or revelation or addition to the handbook or whatever the fuck they call it that the Mormon leadership came out with this week. In case you've been under a rock, what it says is basically that any Mormon children who live even part time in the house of a gay couple cannot be blessed or baptized in the church until they turn 18 and denounce their parents' sin. Also, that any practicing homosexual (what is it with homosexuals that they are always considered to be practicing? can't they ever perfect that thing?) will be considered an apostate which means they're excommunicated from the church.
Here's a website from the church which explains it all, should you be interested.
And a video, as well!
The dude on it is Elder D. Todd Christofferson who looks like this. 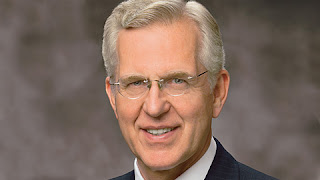 Sweet little old grandpa. Who said, and I quote:

"We regard same-sex marriage as a particularly grievous or significant, serious kind of sin that requires Church discipline. It means the discipline is mandatory — doesn’t dictate outcomes but it dictates that discipline is needed in those cases. It’s a statement to remove any question or doubt that may exist. We recognize that same-sex marriages are now legal in the United States and some other countries and that people have the right, if they choose, to enter into those, and we understand that. But that is not a right that exists in the Church. That’s the clarification."

So this ruling on the grievous sin of homosexuality is going to set children against parents, parents against children, friends against friends, family against family. And will make gay members feel shamed and dirty and most definitely unable to get their own private planet after they die.

To be honest- at the very core of it, there will be absolutely no member of the Church of Latter Day Saints who will remain completely unaffected by this. EVERYONE knows a gay person. Every family in history has had gay people in it, whether they knew it or not.

When the ruling became public, I read it and did what I always do when some major religion comes out with some new crap and just disregarded it. But for some reason, I can't let this one go. I have at least two friends (in real life and on FB) who are former members of the LDS church who are gay. They voluntarily gave up their membership years ago but in their hearts, they, like all of us, long to be accepted by the people they love. And they are in pain because quite frankly, if their loved ones come out in support of them, they are disregarding and disobeying the teachings of their church. And it's a powerful church. They have, according to their own website, fifteen million, three hundred and seventy-two thousand, three hundred and thirty-seven members. The income that the church reaps from its many, many businesses is in the billions of dollars. They are, in fact, the largest private land-owner in Florida. Some estimates say that the LDS church owns 2% of Florida's lands.

An article from Bloomberg online explains how the church has become so very profitable.
Here's one quote:

"To understand DMC’s place in the church’s financial structure, it’s important to start at the very top: The Mormon Church is owned and run by what is called the Corporation of the President of the Church of Jesus Christ of Latter-day Saints. This entity is a “corporation sole,” which is an obscure legal body owned entirely by one person. In the case of the Mormon Church, that person is Monson, the prophet."

Here's a picture of the prophet. 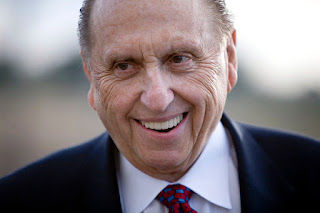 Another sweet old grandpa.
And of course, because it's a church, all the revenue is tax-free.

So fine. They can scam the system any way they want. They can bilk and bully and seduce and fear-monger all the gullible people they can convince that they will live in eternity if they follow the rules and tithe 10% of their income and I'm like- whatever. As Kathleen used to say, humans are not descended from the apes but from the sheep. They can convince women that they aren't worthy of holding the priesthood and they can wear all the magical underwear they want.
But listen- when they start claiming that homosexuality is a grievous sin which requires church discipline, I become enraged.

The one thing I always thought that the Mormons got right was family.
Well, they just destroyed that notion.

And again, it would all be fine if the members of the church hadn't been indoctrinated since birth about the importance of the church and all of its rulings to the point where all that bullshit, hocus-pocus, motherfucking CRAP didn't take precedence over the most natural and elemental feelings of all which is love for one's family and friends, to the point where children and parents must renounce each other to remain in the good graces of the community.

It makes me sick.

I will never in my life understand why people believe in the pie-in-the-sky, faith-'til-you-die rules of religions. But the fact is, that they do.

And in the name of their own cherished gods, they deny their very human existence and purpose. Not to mention their children.

How do they sleep?

Not very well, I am hoping, but frankly, I think that they sleep just fine, wrapped in the holy magical underwear of their belief, not even wondering how many suicides are going to result from this ruling, how many families are going to be split apart, how many innocent children are going to suffer.

Yours truly but not in Christ...Ms. Moon