It's been a pretty perfect day. I had so much fun with my boys. All three of them. And with Jessie, too. Before she got here, the boys and I walked down to the post office and of course I made them pose for the traditional picture. 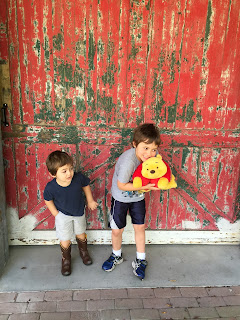 Owen is enamored today with his Winnie The Pooh pillow. I think he's really revving up for his sister to be born. He was extremely interested today in playing with and holding August who is definitely not a skinny little newborn any more. 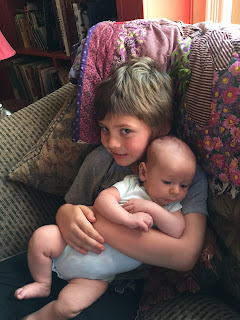 He's very good with him. Protective and interactive and gentle. I think he's going to be actually helpful as a big brother with this coming-soon baby. Now Gibson? Well...I think maybe he's undergoing a little uncertainty about the whole deal. He's been the baby for quite a while. He'll come around, just as his mother did when Jessie was born.

We took August out to the swing porch today for the very first time. It was an event! 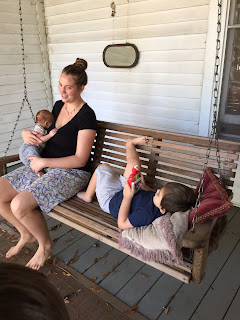 And then of course he decided that he needed to eat. Jessie and I were laughing at him later for fussing while she was getting ready to nurse him because he's probably never had to wait for longer than maybe an entire minute before getting what he wanted. 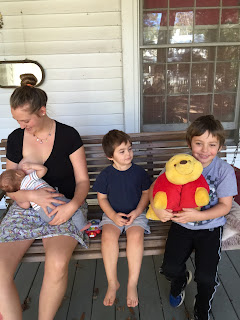 Would you look at all of those long legs?

August is smiling quite reliably these days. His whole face opens up the like the sun and that pretty little cupid bow of a mouth makes the prettiest smile. He will also stick his tongue out at you if you stick your tongue out at him. And he has complete conversations now in that sweet baby-language, already learning the patterns of human verbal communication. I couldn't stop kissing him today. I would have a very serious little chat with him and then just dive in and kiss his face over and over. He's going to think I'm crazy.
He will be right.
I told him today how lucky he is to have the mama and daddy he has, the grandparents he has, the aunts, the uncles, the cousins. And then I told him that we are all so lucky to have him.
He agreed.
He is, in fact, a most agreeable child.

So yes, it was a good day. We did a puzzle and read a short book. We took that walk. There was treasure-hunting in the driveway with a spoon to dig up glass and pottery, and tweezers to pull out the tiniest bits from the hard dirt. We played with the baby. 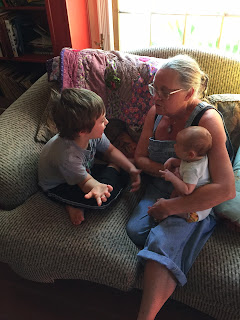 We had deep and meaningful conversations. We laughed a lot. Owen drew a tattoo on my arm of a baby and then he added his mama so that the baby was in her tummy. He took a picture of it but it doesn't really show very well, due to the fact that he did the tattoo in orange highlighter pen. 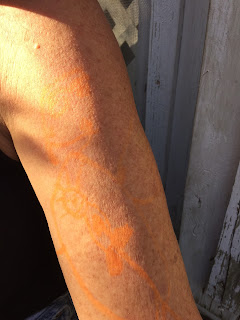 He did it on the inside of my arm so I can hug it to me any time I want to hug the baby.
Let's face it- the child is pure sweet.

The sun is down now and I have the house tidied up, laundry running. I'll eat some more leftovers here in a little while. I feel peaceful and at peace. Both. All of my chickens are put up in the roost and I keep thinking about spring when I'm going to get a few more biddies. Just a few. I can't wait.
But I will.

Let's all be warm tonight, let's all be at peace.
Let us all have sweet dreams.
Let us have sweethearts or soft cats or dreaming dogs to sleep with, or a book by our side.
Or a Winnie The Pooh pillow. Whatever brings us comfort.