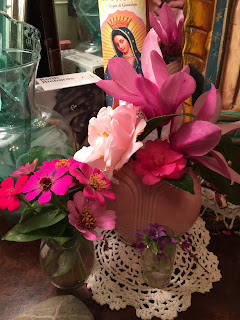 That particular grouping of flowers is one I have never seen before.
There are camellias which are normal for this time of year and there are also zinnias, blossomed off volunteers from the zinnias I grew this summer and which I should not see until next summer. There are Japanese magnolia blossoms which, as I have said, we should not have until February, and lastly, there are violets, those eternal harbingers of Spring, but which I discovered already blooming in the side yard by the burn pile.
I have never in my life seen a November like this.
At this moment I am wearing a pair of overalls and a tank top. It is six o'clock in the evening and I am as comfortable as I can be.
There are also mosquitoes, the size and ferocity of which I have never seen before either. As I was turning on the hose to fill up the chicken waterer, I felt something stinging me through the nitrile glove I was wearing. I looked down to see something so large I thought surely it had to be a spider, but no, it was a mosquito. Besides the huge ones, we have small ones. We have many, many, many mosquitoes. And they are hungry.
The azaleas are budding up. The hydrangea I cut back is putting out new green leaves.

Odd times. Things I've never seen before. Well, I've seen all of these things but never all at the same time. Never all in late November.

I did not get nearly as much done as I had hoped today but the chickens are sleeping on fresh straw in their nests and their feeder and waterer are filled up. I swept porches until I formed a blister. I watered the porch plants which, let me point out, should not BE porch plants by this time of year, but huddling together into a tangled jungle in the mudroom, waiting out the freezing weather. The beds all have clean sheets and I tidied up the cabinet where I keep my baking dishes and pizza pans and pie plates and all of that stuff. I also cleaned out the food cabinet and made room for all of the jars of preserves I've made recently, clearing the counters of those. I scrubbed sinks and folded and put away clothes and gave the chickens leftover pancakes that needed to be cleared out of the refrigerator. Maybe I'll get a little more burst of inspiration and straighten out the skillet and pot cabinet. It needs it.

As I've worked today, I've spent a lot of time thinking about my brother, a lot about the things that happened this week, the things we said, the things we did not say.
I am glad for the unsaid things, mostly.
I know that if I had not asked him to leave, those things would have been said and that's what I was afraid of. And the very sad part about it, is that I feel as if we are both puppets, our jaw-strings being manipulated by the circumstances of our childhood.

As dear Jo pointed out in a comment, yet another of the curses bequeathed to the children of dysfunctional families is the inability to have the sort of relationships with each other that siblings should be able to have. Although I was aware of this, it never really hit home with the entire true honesty of it until I read what she said which was this:
"One of the things my father said at his brother's funeral was that the awfulness of their upbringing had precluded a real relationship between them in their adult life."

Oh god yes. It's been another odd thing in that since my mother died, this particular brother and I have gotten along for the most part better than we have in years while the brothers I have been close to my entire life and I are barely communicating.

Here's another thing I realized- my brother's very presence is a powerful trigger for me. It throws me back to the many years when we lived in the same house where I spent my days and my nights in a veritable sexually and emotionally fueled terror. This is not his fault. But it is part of the reality of the situation.

When we talked on Thanksgiving night, my brother and I, there were moments when he heard me. When I would say something and he would say, "Oh. Wow. That would explain this..."
And then immediately, it was as if he had not heard a word of it. As if the understanding had suddenly vanished under a rushing wave which had washed over it, deleting meaning and any understanding he may have had.

He is SO angry at me for writing about our mother here because the things I write are not in line with the woman he knew.
"Mom was joyful!" he said.
"She was joyful around you," I answered so very quietly, "And I am so glad that she had that."
"She couldn't be that way around you," he told me. "You didn't have the connection."

No. We didn't have the connection.

It wasn't until my older children were approaching the age I had been when my stepfather began abusing me that I had the epiphany that there was something horribly wrong about the connection my mother and I had. Had always had. As I said yesterday, my love for my children came with them and my overall feeling at their births was one of protection. I remember as if it was yesterday. I was raking my yard and I had just gotten married to Mr. Moon and I felt as protected and safe as I had ever been in my life and out of the blue came the realization that this was the first time I had ever felt safe and protected in my life and that felt incredibly wrong. And impossible to accept.

And I became so angry that it took me years of therapy and going to a group for survivors of childhood sexual abuse to even begin to sort out why I suffered the depression, the anger, the sadness, the resentment, the fear that I did, much less do a damn thing about it.
It's unbelievable that my husband stuck with me during those years. I was horrible. I was incapable of loving him the way he deserved to be loved. And I was NOT the mother I should have been.

My mother did try to apologize to me once. But it was not unconditional. She said she was sorry that my stepfather had abused me but that I had to understand that she was not aware of any of it. That it was not her fault.

The good result of this is that I have, as a mother, been so willing to admit my transgressions to my children. Even up to the point where I recently apologized to Jessie for telling her that she didn't need this fancy stroller/car seat/infant seat system that she wanted to buy.
Turns out it's pretty awesome and I wish I'd had something like that when my babies were babies. And I told her that.
"I was wrong," I said.
"Yep, you were," she told me.
And we laughed.

And that is the least of the mistakes I've made with my children. I know it. They know it.
But they also know that I am willing to admit them and I will apologize to them whenever it occurs to me that I have transgressed.

Well, I'm rambling. But as I said, I have thought about all of these things a lot today.

I know that my mother was not a monster but I also know that she had very deep problems which got in the way of her ability to love and protect some of her children the way she should have. I feel deep sorrow for her because I know she felt horrible guilt.
She WAS capable of great love. I saw that not only in my own childhood but with her grandchildren at times.
She could be joyful. I remember her dancing, singing, being silly.
She was not Joan Crawford. She was not Sybil's mother. And I am quite aware of the fact that as my brother points out repeatedly that so many others have suffered so much worse.

But that doesn't always help and it doesn't erase the fact that so many of us suffered horribly from our parents' inabilities to take care of us the way we should have been taken care of.

I remember my wonderful, wonderful therapist telling me when I kept saying, "But I wasn't raped! It really wasn't that bad!" that one of her most damaged patients was a woman whose father never touched her at all. He simply would not let her close the door to her room. Ever. And that she always knew he was watching her.

This is not a contest of who had it worse. This is just the way it is.

The Japanese magnolia is blooming with the zinnias and the violets and the camellias. To the casual and unknowledgeable observer, these flowers look beautiful together.

But it's not right.