More Videos, A Recipe, A Confession, And A Medical Fact

I believe I may go into the Meyer's Lemon meringue pie business. Last night Vergil and Jessie brought over three lemons from their tree and I've now made two pies. Big pies. These lemons are the size of a baby's head. I make the pies the same way I make key lime pie.
Thusly:
I make a graham cracker crust and bake that a little bit and then I beat three egg yolks and add a can of sweetened condensed milk. I mix that all up and then add about a half to three-quarters of a cup of the lemon juice. I mix that up, pour it into the crust and make the meringue with the egg whites and about a third of a cup of sugar. Maybe a half. I put that on the pie and bake all of it for about ten minutes at 425 degrees.
You can't beat it. No pun intended because actually, beating is involved. The whole darn thing doesn't take more than half an hour to make, especially if you have a lemon the size of a Volkswagen so you only have to squeeze one.

The one I made last night was for us and the one I made just now is for Mr. Moon to take to work tomorrow for the bank's potluck Thanksgiving dinner.

Anyway, I am feeling better now and once again, who knows why? not me, etc.
Maybe it was the sweetness of having the baby in the house again last night and feeling slightly or at least adequately competent at making a supper from leftovers and garden greens and giant lemons. That August is the best baby. He is not cranky at all and when he's awake he likes to look around, talk, smile, and nurse. If his diaper needs changing he does let the world know about it and when he's hungry, he doesn't hide it. But hey- he's a baby.
Also, it was a wonder, as it always is, to be able to talk to my daughter woman-to-woman, mother-to-mother, and yes, still mother-to-daughter. I mean, it's just a joy.
I had a wonderful text conversation with May today wherein she reminded me of the time that we heard an old recording of Helen Keller on NPR and how we couldn't stop laughing because we are SO mean. I should be ashamed of this but fuck it. May said I laughed the hardest. And that we said things like people telling her, "No, Helen Keller! Seriously! You sound good!"
Oh god. I really should be ashamed to tell you this. But it's sort of like that thing where you get into these totally inappropriate laughing jags like in church or at funerals or Catholic weddings or...well, wherever you get into them and you KNOW it's so wrong and if you so much as take a breath, the laughter is going to come out of you in great whoops and cries, and tears start falling from your eyes and usually, someone else is there and since this is a contagious thing, they're about to die too and you can't look at each other because seriously, you'll laugh so hard you'll crack a rib and the priest will throw you out.
So that was a different sort of mother-daughter conversation which was also mean-woman-to-mean-woman conversation and I am proud of the fact that May is as evil as I am. She got that from me.

And please let me say that Helen Keller was one of my main childhood heros and I still can do the alphabet of the deaf or whatever you call that thing. This. 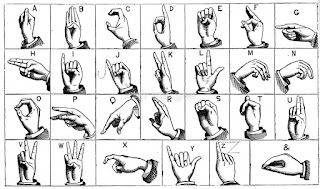 My grandma was deaf and I memorized it so that maybe I could speak to her more easily but somehow, that never happened. Maybe she didn't know it. But that chart was in the back of my beloved biography of Helen Keller that I bought in the fourth grade from the Scholastic book fair so see- I wasn't always so mean.

Anyway, here's the funny thing Owen said to me today. We were talking about school and he said that he'd gotten a stomach ache when they went to Special Area. I asked him if he didn't like Special Area or something but he said no, he loved it but maybe he was getting a tummy bug.
"You know," he said. "When the tummy bug moves into your stomach, it takes four or five days for it to unpack."

And actually? This is medically sound.

So then we got to talking about music and singing and I told him I still remembered some of the songs I sang in elementary school and he asked me to sing some although usually, my singing also causes him to have a stomach ache and so I sang several songs I remembered from childhood ranging from a sea chanty (Cape Cod Boys) to a cowboy song (Streets of Laredo) and then, since he encouraged me to sing more, that famous elementary school round of Zulu Warrior and finished up with a rousing rendition of Mares Eat Oats.
"That one was old when I was a child," I told him.
"Wow!" he said. I can only imagine that he was envisioning me as a small child in a one-room classroom with dinosaurs grazing outside the windows.

They call it Cape Cod Girls but whatever.


Oh my goodness.
It is raining a little bit and supper must be made.