The Frogs Are Tuning Up 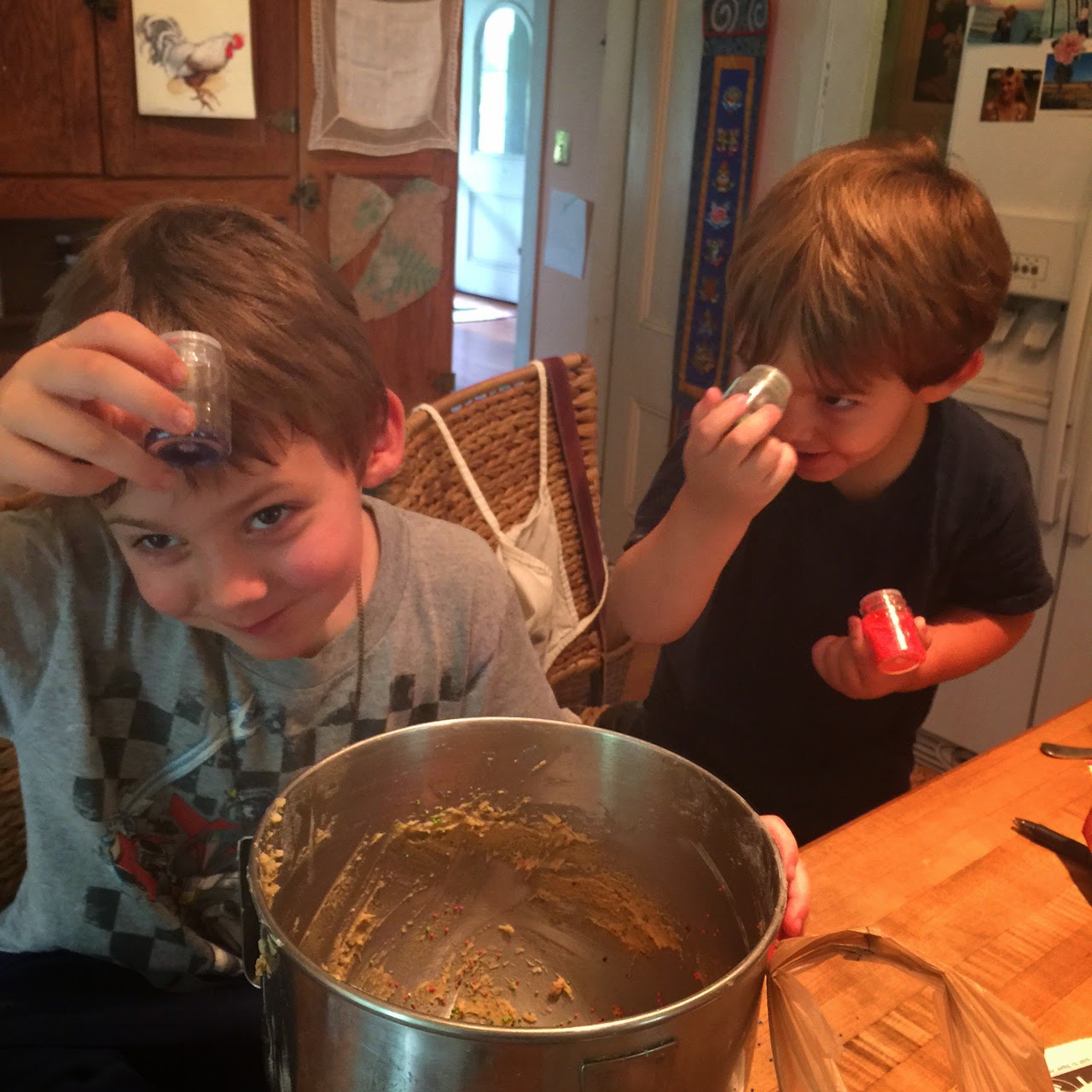 Do not even ask me what's going on with the sprinkles bottles to the foreheads. I have no clue.
We were making cookies and that is how they posed for their making-cookies picture.

Owen asked me if we could do that- make cookies- and I pondered for a second and said, "Sure. Why not?" Mr. Moon is about to leave for a week to stay in Apalachicola and go fishing with his sister so I thought it would be nice to make a few cookies for them. I took part of the batter and added pecans to it because Mr. Moon likes pecans and for the boy's part, I let them dump all the sprinkles in they wanted. What is the damn point of being a grandmother if you can't let your grandkids use all the sprinkles their hearts desire? We almost hit a snag in the cookie-making process when I realized I didn't have enough butter but then I thought, "Papa Jay's!" so we put our shoes on and walked down to the store and at Papa Jay's you can buy butter by the stick (salted or un-salted, one buck a stick) and we were saved! It's about a block away if we had actual blocks here in Lloyd and it cracks me up how much of an adventure that little walk is. When we get within fifty feet of the place Gibson starts yelling, "There it is! Papa Jay's!" as if we'd crossed the desert in search of an oasis and it had finally come into sight, the date palms reflected in a pool of cool blue water.

Oh, my babies. I let Owen make the transaction with the money. He is learning. He tried to get me to let him keep the change from a five dollar bill and I said, "No way, buddy."
He plans on doing some more cleaning when they come tomorrow and I will pay him then. He's really on a cleaning jag. His dad's a good cleaner too and yay for that! He certainly didn't get the cleaning gene from my side of the family.

So we came home and made the cookies and if I'd have let them, they would have eaten every bite of the cookie dough and then when the cookies were done, would have eaten cookies until they puked. Lucky for me, their dad came a bit early today so I didn't have to deal with the sugar rush mess.
Yet another perk of being a grandmother.

And so it was a good day and Mr. Moon has the boat hooked up to the trailer and is loading up the fishing poles. I'll probably drive down to join them later in the week for a day or two when I'm not needed for boy-tending.

For some reason, I've thought about Kathleen a lot today and have missed her so much. Who knows why? I did pot up two begonias that I'm trying to root and I thought about how we would do that- go out and buy begonias and share them with each other. Also, Owen noticed something I never ever would have which was thousands of almost microscopic red insects covering my car and I have no idea what they are but she would have known. She knew so much. She was so smart. So funny. And I've had anxiety today and she was always so understanding of that. She didn't tiptoe around it or try to talk me out of it. She just accepted it as much a  part of me as my love of begonias.

My husband is on the road to Apalach now. He and his sister will have a great time, telling each other stories of grandchildren and old friends, remembering those they loved who have gone on, and fishing in the Gulf. I am glad they have this time. I told Mr. Moon to catch some grouper so that I could come down there and cook it for them. I would like to do that. Meanwhile, all is quiet in Lloyd. The birds are saying good-night and the chickens will be making their way to the hen house soon. They gave me eight beautiful eggs today and I have thanked them. There is a sense of melancholy in my bones but it's okay.
It is really okay.

And here is Gibson. He watched an old video on my phone of Owen, when he was a tiny boy, washing things in soapy water at the kitchen sink and he wanted to do the same.
"I am Owen!" he told me. He loves his brother so much. And his brother loves him.


And I love them both. When Gibson stood at the sink with his ducks and his dog and his cat and his frog to wash he said, "Taught me?"
I said, "Do you want me to teach you how to wash them?"
"Yes," he said.
And so I demonstrated with the old toothbrush how to do that. And later, when he was sitting on my lap, he said, "Kiss."
"Do you want me to kiss you?"
"YES! This ear!" and he pointed to the specific ear he wanted me to kiss. I kissed that one and then the other one and then he said, "HUG! HUG!"
And so I did.
And on the way back from Papa Jay's, Owen slapped me on the butt.
"What are you doing?" I asked him. "I can't believe you're slapping your Mer Mer on the butt! What if I slapped your butt?"
"It wouldn't hurt," he said, and laughed.
"You're right. It wouldn't," I said.

Sigh. He knows he has me under his thumb.

Love and the family and the circle of it all.

I swim in the cool oasis of the blue lake of it, the date palms stretching overhead with their ripening fruit.