Forgive Me. Spring Brings Out The Rhymes As Well As The Flowers

It's been a quiet day and I have been lazy. I went to the grocery store and bought some salmon to cook for myself and some grapes for Elvis. Grapes are the chicken's favorite food and I thought that if I cut them up, perhaps they would interest him a bit.

I brought my groceries in and cut up grapes and went all over the yard, looking for the old man, holding the blue dish of cut green grapes in my hand. I could not find him and so took a nap, sleeping for over an hour in the black depths of unconsciousness. I got up and had some coffee, drove down to Bug's who is out of town, visiting his children, to tend his animals: the dogs, the cats, the goldfish. It is so quiet there and I see Kathleen's...what? What is the word I want here? Not her presence. I don't feel her presence there so much. I think she was such an evolved spirit that she took off quickly into whatever realm comes next. But her influence, for sure. The plants, the beautiful spaces Bug carved out for her when they rebuilt the house on the land which she had such plans for.
Today I stole (yes, Bug! I stole! please forgive me) six tiny azalea sproutlings she'd brought over from her old house. When she trimmed her plants, she could not bear to just let the trimmings die but stuck them in dirt or water to see if they would root and because she had green magic, they did.

I brought them home and have stuck them in the dirt here and then watered them. I hope they grow. This would be a goodness, a gift from that woman. 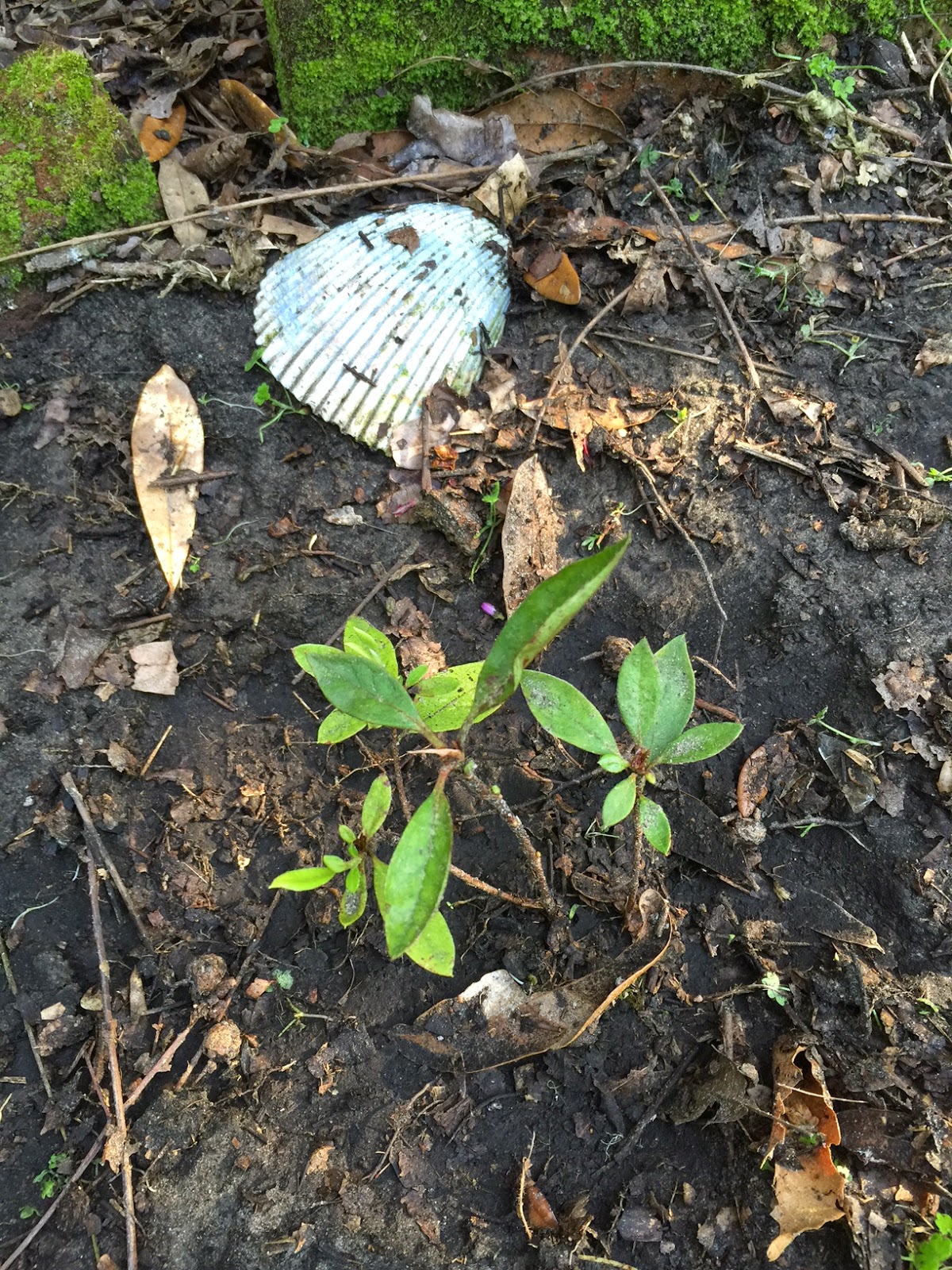 I have the saddies tonight, as my friend Sue used to say. Sue died in 1995 and I miss her still so much. I am suffering from the sadness malady perhaps because I am thinking of Sue and of Kathleen and of my friend Lynn. Three such important women in my life who died way too early, leaving me to wonder why I am still here and they are not. And of course, because of Elvis.


I finally found him, hiding in the pump house. He is shy of me now, which he has never been and I know it's because of us grabbing him and trying to clear his craw, his crop. And yet- we had to do it. But. Still.

Thoughts of death in the fall and winter are normal and are natural and we all feel that, I think, as plants and animals go into a resting phase, sometimes seeming to disappear entirely.
I do not think it is unnatural to feel them in the spring, either, though. As life re-emerges in such colorful force, it is, for me at least, the hovering spirit of those who will not be coming back which I think of, even as I celebrate the life that does. I do not need reminders of these loved ones. But again, for me, it is perfectly fitting to have plants that stand in for them in our minds, at least.

After Sue died, I planted a Christmas cedar tree from a pot on our property in Apalachicola. It is now huge and every time I see it, I think of it as a small miracle. I literally did nothing but dig a hole, stick it in, and leave. I remember that day so well. I was drunk on death's aftermath, and I drove down to the coast that day with my husband and another friend and all of us had been with Sue when she died so incredibly gracefully a month before. We had all been holding her. All had been loving her. I remember riding in the backseat, looking at both of these men who had the biggest hands I'd ever seen and laughing a bit to myself that Sue had somehow chosen these men-with-big-hands to hold her unto death.
And there is that tree. And I remember.

While that little video of Elvis was downloading, I went out and picked roses from a bush that the people who lived here before us planted as a tribute to a friend of theirs who died. When we bought the place, the man told me that no matter what we did, it would continue to live, and so it has. The most fragile white roses bloom on it and I knew that man slightly. He was a strong and loving force in the community,  an early victim of AIDS. What I remember about him was his laugh which was without restraint, and joyful. 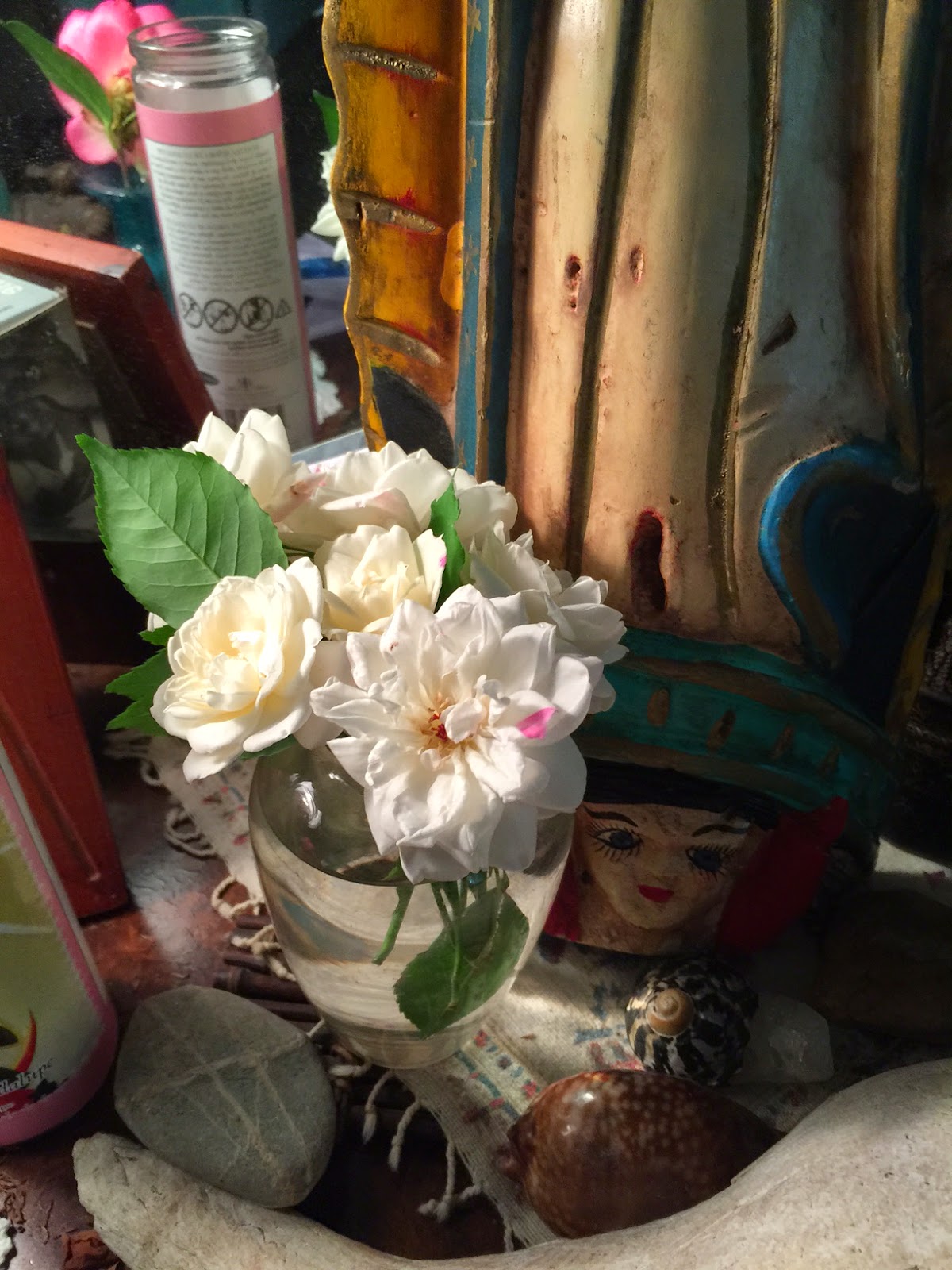 I picked the last camellia of the season, I think. I put it too, in a vase on the hallway altar table. 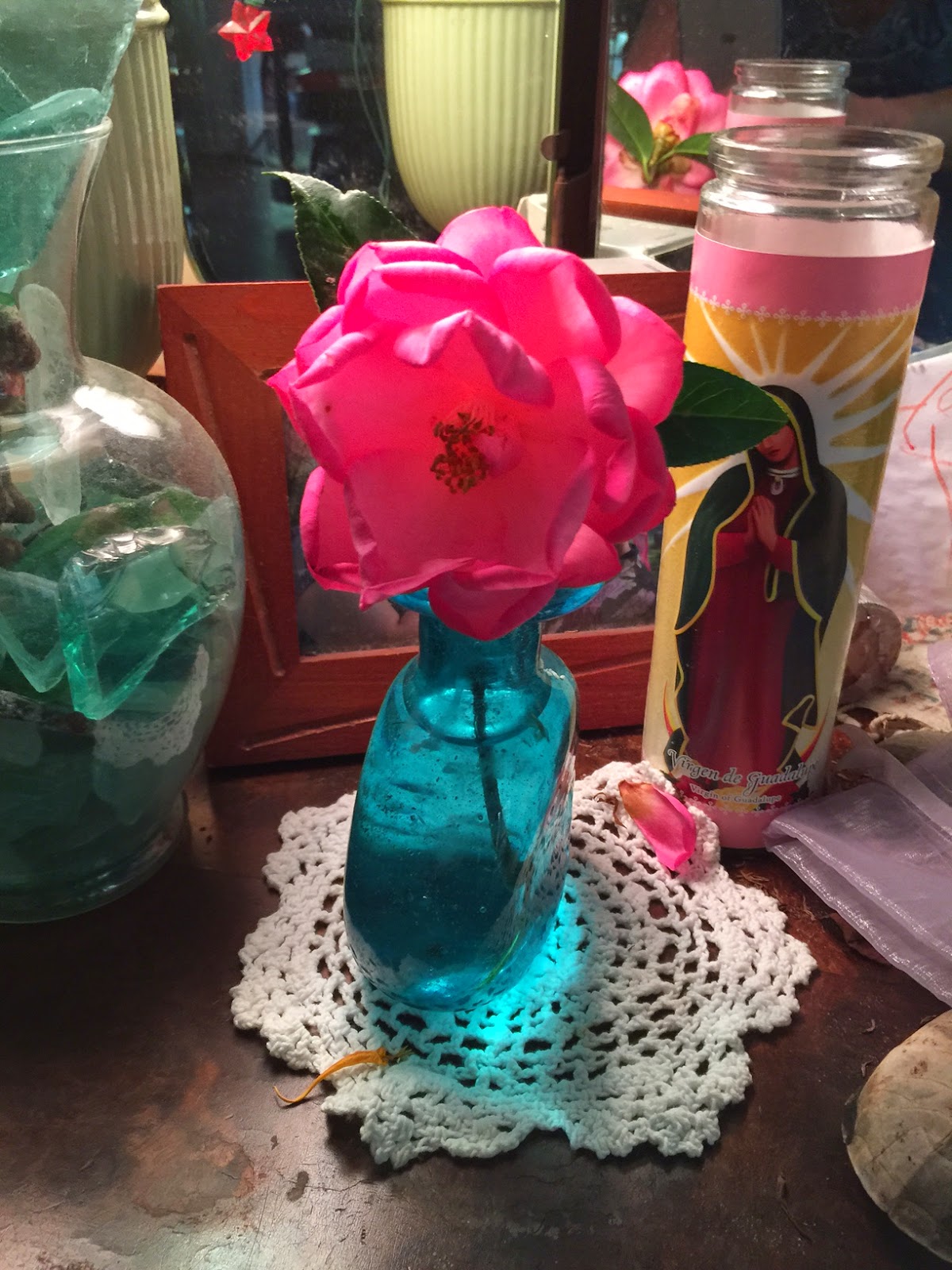 It represents no one's death. It is just beauty, it was my joy in winter, that camellia. The joy of it bleeding into spring.

My eyes are seeping, weeping, and it's quite okay. In fact, I am so grateful to have this time by myself to think these thoughts, to have these feelings, to be able to cry these tears without anyone having to worry about me, even my husband. He and I worry overmuch about each other and sometimes, when he is gone, I can feel more fully what it is I need to feel without having to be concerned that he will think that something is wrong.

Nothing is wrong. I am just thinking of those I have loved. Of those I do love. Of how much I appreciate this life I've lived. And as I have so often said, sometimes the heart overfills and needs to leak out the eyes.

Spring is a good time to let that happen.