How A Girl Got Her Name 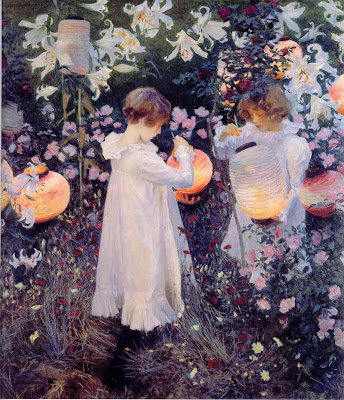 When my daughter, Lillian Rose Moon, was born, twenty-three years ago tomorrow, we had no name picked out. Since I hadn't had a sonogram and didn't know the sex of the baby, we'd thrown around a bunch of different names but hadn't decided on any one of them.

And then, after my shortest labor (a mere eighteen hours) and a very prolonged pushing stage, she was born. All ten pounds, two ounces of her.

"Mary," the midwife breathed, "that is a huge baby!"

And indeed she was. She was born slightly distressed because there'd been a small issue of shoulder dystocia (meaning that her shoulders were broader than her head- not the usual order of things) and the midwife had to do some fancy maneuverings to get her out and then get her to breathe. While she was working on my baby to get her to take that first important breath, she said to us, "Talk to her. She needs to hear her parents talk to her!"

And I determined right that second that she needed to know she was supposed to be here and that she needed a name to be called to tell her that. And the name Lily Rose came to me and I called her that and reached out and touched her and her daddy talked to her and touched her and the midwife breathed into her and Lily breathed back and started to turn from the dusky dark color she was to the peachy pink color she needed to be and we all cried tears of relief and joy.

And that's how Lily got her name. I sort of thought I was naming her for Jimmy Carter's mother, Miss Lillian, because she was such a strong and cool old woman, joining the Peace Corp at the age of a hundred or something like that and the Rose part just seemed to fit.

Now, in what would seem to be a completely unrelated matter, a few years later I was at the flea market and found a copy of a book that I had been raised with. The book is huge, and it's called World Famous Paintings and it has gorgeous plates of, well, world famous paintings, with brief commentaries on the paintings which range from works by Giovanni Bellini (1429-1516) to Grant Wood who was born in 1892 and who was still alive when the book was published in 1939. There are hundreds of pictures in this book and as a child, even before I could read, I loved going through it, page by page, looking at the pictures and trying to figure out what in the world they could be about. Some of them were disturbing and some of them were slightly titillating and some were charming and some (mainly the landscapes) I found mostly boring.

I grew up and forgot about that book, hadn't even thought of it until I ran into another copy of it. Running my fingers down the beige cover of it, standing there at the flea market, I was instantly transported back to being a little girl, holding the massive weight of it on my lap, going through the pictures and wondering and learning and thinking deep, deep thoughts about images that had been created by people hundreds of years dead.

I bought the copy and brought it home and opened it up and it was like revisiting a childhood friend or perhaps some older relative whose stories had made up a good part of who and what I had become, even though I hadn't thought of her in years.
I got to the last few paintings in the book and there I found a picture which I had completely forgotten by John Singer Sargent. It is the picture you see above, of two young girls in a flower garden, dressed in white and preparing Chinese lanterns to hang.

The title of this painting?

Again- another moment of wonder at how something so obvious could have completely escaped me.

Well, whether the roots of Lily's name had been forgotten by me or not, it is a good name, and one which suits the sweet woman she is now. There is no one in the world whose hugs feel as good to me, whose sense of humor makes me laugh harder, whose smile is brighter, whose face is more precious to me.

And I could have named her Mona Lisa or Sun Flower or Madame Sophie or Madonna or Venus Rising or Cupid or Beatrice, which all would have been fine names that were no doubt also lodged deep within the folds of my brain, but I didn't. I named her Lillian Rose and called her Lily and tomorrow is her birthday.

Happy birthday, my sweet flower child.
It has been joyful watching you bloom this year. You are married now and married well, and you are living in your own place with your husband and cats and you are happy.

You may thank John Singer Sargent for your name.