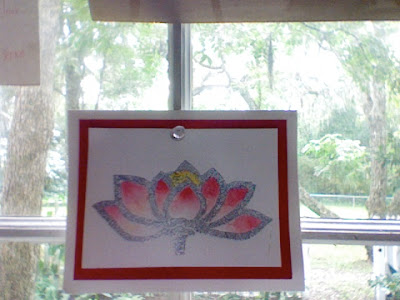 I've been in sort of a slump here, the last few days. I attribute it to foolin' around with my medication. I was at a dose that was doing me quite well and then, because I'm an idiot, I decided to cut back and the little slimy monsters of depression and anxiety started poking their nasty green heads up again going, "Yeek, yeek, yeek!" and so forth.
So while I'm trying to get back to the blood level of the dosage that does work, I've been having some of those highly uncomfortable and fearful feelings of complete inadequacy and incompetence and general thoughts of why-the-hell-am-I-still-taking-up-space-on-the-planet-breathing-air-which-a-good-person-could-breathe?
But I am certain that things will turn around again and I will have another moment of happiness and contentment here soon. We ate the pinto beans I had my epiphany reaching for in the grocery store last Friday and I will say they were quite possibly the best pinto beans I've ever eaten. I made a pot of them and mixed them with brown rice and also made some squash croquettes of yellow squash and crackers and egg and onion, and a nice salad with grated carrot on top. When I grate a carrot on the salad, I always feel like I've really done my job, if you know what I mean, those bright orange shreds fairly screaming health and vitality, especially if eaten with tomatoes and baby spring greens and it's so pretty, too. The green and the red and the orange. It was a fine meal and I enjoyed eating it but even while I was enjoying it, I was thinking all sorts of dreadful thoughts, the kind that tell me my medication is not covering all the bases.
I grow quiet when these spells come upon me and I can't make phone calls and it's hard for me to blog and yet, I still need to hear the voices of others and I still need to try and say what I need to say to others.
Communication. It's such a human need. We all reach out in the many ways we have to communicate and I'd say it's a boomtime for human communication what with the internet and e-mail and blackberries and iPhones and regular old cell phones like mine and then you have the less traditional ways of attempting communication- some not so benign, such as flying planes into huge buildings.
I don't think we ever really gave much thought to what was being communicated that day, seven years ago. A lot of anger, I would say. A lot of insanity.
I wish we had spent more time trying to figure it out instead of just going off blindly into wars that will only serve (have only served) to make people who weren't angry before angry now and to be driven insane by all the death and destruction around them.
What do we communicate with war?
Nothing that anyone wants to hear. Nothing that seems to help push humans down a more loving, peaceful path.
And I myself feel so ridiculous, sometimes, trying to communicate with these words I send out into the world. But sometimes I know they resonate with someone, just as I know that other bloggers' words have resonated with me.
A few weeks ago Quiet Girl wrote a post about some things that were deeply personal and deeply heartfelt and I wrote her and told her I'd light her a candle, which I did. It was one of those candles that burn for a week and it just went out yesterday or the day before.
And this morning, when I went to check my box at the post office, I found in it a card that she had made me and sent. A card she'd made with her very own hands and addressed and put in an envelope and mailed to me and now it's pinned to the window right above the desk where I write and every time I look at it, I feel a little more serene, a little more like this whole writing thing isn't just a crazy idea but a real, true way for people to communicate and I am made joyful by that.
She wrote a message inside and signed her real name and now I know her in another way and I am just so grateful for that.
Thank-you, Quiet Girl, for sending me that lotus flower. Thank-you for the words you wrote inside.
A piece of you is here with me, actual and real, tangible and beautiful.
Thank-you for communicating something very precious in such a real, tangible and beautiful way.
And if there's anything good to be reminded of on this anniversary of that day seven years ago when humans and buildings were turned to dust by anger and hate and insanity, let it be that we are all just human beings, trying so hard to reach out, to touch each other, to hold close the ones we love as long as we can, to tell them what they mean to us.
There are so many ways to do that.
I was given such a sweet one today.
A red lotus flower with a sun-golden center, sending out the divine spark in Quiet Girl to the divine spark in me.
I send it on to you.
Posted by Ms. Moon at 1:28 PM