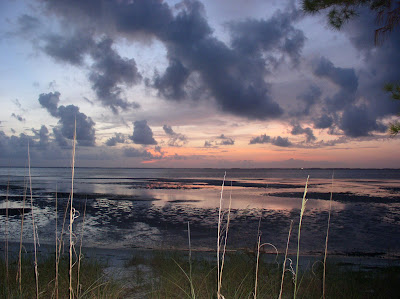 I am sitting on a porch with a slight breeze coming from the west, the water in front of me blue, but also green where the sandbar lies close to the surface, not unlike the colors on a globe, approximating what the earth looks like from space. I love sitting on this porch, watching the changes in the bay as the day goes from morning to afternoon, to evening, to night.
It seemed to take forever yesterday to get here. First one small crisis, then another, before we could leave. Finally we were packed and on the way but we had to stop in Medart for gas and coffee and then we stopped in Panacea for shrimp, right down the road from where I lived a long, long time ago with other crazy hippies in a falling-down house which was where I was living when I realized I was pregnant with my first child. That was a strange time in my life and one where I was as mystified and in despair as I have ever been, not knowing what steps I could possibly take to go from that sort of a life to a life where I could be a good mother.
That house had been at the beginning of a path and here I was, not a half mile away, so much further down it.

When we pulled up to the seafood place, another car pulled up at the same time and a woman got out of her car wearing a long skirt, a black shirt that showed friendly cleavage, and cute little sandals with tiny kitten heels.
“I think that’s Connie May Fowler,” I told my husband and he said, “Really?”
“I do,” I said.
When we all got up to the porch of the seafood place, the seafood people greeted her, “Miss Connie! How are you?” and I knew it was her for sure.
My husband stuck his hand out and said, “Hey. We live in your old house.”
And we do. My beloved house in Lloyd was hers before her divorce and we bought it from her ex-husband. She and I have spoken a tiny bit via e-mail and I introduced myself to her and she was charming and said, “So nice to meet, not in cyberspace.”
We chatted for a moment about how her next book has that house as a character in it. She’d told me this in an e-mail about a year ago, and since then, I've had curiosity about how this book will turn out and also a small and unworthy bit of resentment because it's my house now, that beautiful old place beneath the oaks.
But listen- I know that a writer will use any damn thing she wants in her work because every thing and every one is part of the stuff of the art she makes.
In fact, her telling me about using the house in a book last year is what prompted me to start my own book about a frustrated wanna-be writer who is living in a house that a “real” writer used to live in and who is writing about it.
Fiction upon fiction, dancing with truth, all living in the same house- these things get crowded and complicated.
The book’ll be done by fall,” she said and what I didn’t tell her is that with any luck, the first draft of my book (Worst Novel Ever Written) will be done this weekend. No threat to the success of her book, anyway.
We got our shrimp and left, saying good-bye, and I said to stop by any time she wanted, in Lloyd, but I doubt she ever will. The house has become part of her past in essence of reality and part of her future in essence of fiction and it takes a long time to get from one place to another and it hardly ever pays in circumstances like that to backtrack, or so it seems to me.
It had been nice to meet her, finally, after reading her books, after living in her house. She looked exactly the way I thought she would, exactly the way an author should- pretty and smart and a little bit Bohemian. A woman with her own style, a woman with charm and perfectly painted toenails.
I wonder, though, if she looked at me and thought, “What is this woman doing, living in that house, under those oak trees?”
I was wearing overalls, and not the cute linen kind but blue denim ones that I’d put on that morning to pick the garden in and had never taken off. The kind that prompted a man at the dock on the island to ask me in a deep Georgia accent, “You a farm girl?”
“Yes,” I answered him, after some consideration. “Yes I am.”
It seemed as true as anything I know.
But then again, I’m on an island where it’s hard sometimes to distinguish between what is land, what is air, what is sea, and even if you can, it's changing all the time as the tide rises and falls, all under the mysterious pull of the moon as it travels around us, as the water is pulled into the air by the sun as we move around it.
It’s all so mysterious, this pulling and tugging, this constant changing from one thing to another, our very essence being transformed all the time.
I feel it now, this mysterious process, and I use words to try and define it like the sea uses waves to define the shore, one of us far more successful than the other in its task.
Can people change their essence the way water can change into air? Can mothers become writers, can writers become mothers? What sun is it that pulls us from one form to another, one path to another?
I have no idea and I hear thunder now, rolling from the west, and I will probably sit here and think about it all, watching the bay change, watching the day change, and I will be changing too, but I am not sure how.
Posted by Ms. Moon at 3:06 PM