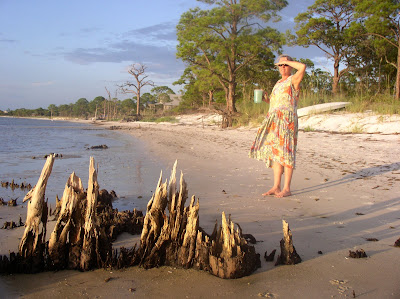 I'm home again in Lloyd and it was a lovely weekend on Dog Island. The funny thing about Dog Island is that a lot of people who have homes there only come down a few times a year and the Fourth of July is one of them.
We who have the luxury of living nearby know that the best months on the island are the fall and winter months when there is no one about and the temperatures allow more than early-morning and late-evening walks.
But amazingly, this Fourth of July was temperate. It was not incredibly hot and although storms passed to every side of us, we didn't get one drop of rain, although I wished we had. I love storms on the island, the wind whipping the pine trees and sea oats into a frenzy, its voice as it wails through the dunes a high, keening thing, making my little house a cozy nest, a safe place to be to watch nature have its way with the world.
The house next door to us on the west is almost never occupied. The people who own it live down in central Florida, which is funny, because that's where I went to high school, where I lived for some very formative years. They own a restaurant which is a regional landmark and I can tell from the way they act on the island that they don't get nearly enough ya-ya's out in their real life.
Bless their hearts.
The house to the east of us on the island is the home of a really incredible artist name Roger Leonard. He, as do many of the island residents, spends a few months in the summer time in more gentle and less broiling climes. So he wasn't home and it was strange, to walk past his house on the bay and not see a light on, but I'm sure that wherever he is, he's painting and probably thinking about the island. I sometimes never see Roger on the island, even if he's there, but sometimes I do. We might run into each other down at the beach at sunset and it's strange how even though we hardly know each other, we always seem to fall into conversation about some deep and meaningful stuff, the two of us. It's like we have no reason not to and so we do. I have another neighbor on the island that I feel the same way about and maybe it's because if you live on the island, you don't get a chance to have what we would call a social life and every interaction you have is fraught with all the meaning you don't leak out with bullshit stuff that happens in normal life and jobs and so forth. Let's face it- if you live by choice on a barrier island where there is no bridge and no cable and no decent drinking water, you really have a great need to spend a lot of time by yourself.
I'm planning to spend a week down there by myself for my birthday and this whole weekend I was thinking about that. I've spent a few weeks there by myself and it's always been wonderful, although I did have ONE night where I got the anxiety so bad I thought I might die and it was such a scary time that it still makes me take pause at the thought of going down there by myself but dammit, I'm going to risk it.
I'm going to take myself and a bunch of library books and my computer and my Worst Novel Ever Written to rewrite and food that I think I might want to eat and maybe some new strings of light I have stashed away from Target and by God I'm going to walk and do yoga and write and read and eat whatever I want and sleep whenever I want and watch every damn sunset and pray for a storm or two.
That's my plan.
My birthday plan.
I'll let you know how it goes, I'm sure.
Posted by Ms. Moon at 6:44 PM