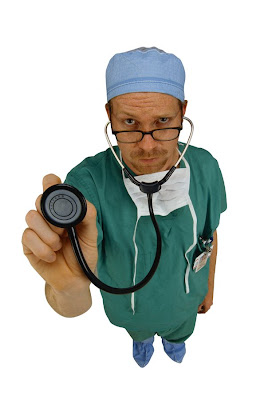 This may come as a surprise to those who know me because I NEVER, EVER talk about all the various illnesses I am certain, at any given time, that I'm dying of.

Now the reason I don't discuss my many and varied terminal (and they're ALL terminal-believe me, I'm a nurse) illnesses is twofold:
1. If I talk about them, they may become real.
2. If I talk about them, someone might say, "Yeah. You should see a doctor about that."
And the problem with that is, my mental illness concerning doctors and the medical profession is even more extreme than the one where I think I have horrible diseases. I've had THAT neurosis my entire life and I have no idea why because I have no memory of ever being mistreated by a doctor in my childhood, although I do remember having to be held down by a nurse and my mother so that the doctor could give me a flu shot, and even two grown women had a difficult time keeping me still enough for the doctor to find his mark with the syringe.

Perhaps it's all related to needle terror but I don't think so because I'm not especially scared of needles any more. Perhaps it has more to do with the fact that as a child my mother occasionally had to go to the hospital (where they have doctors in white coats who give people shots!) for pneumonia, leaving me and my brother in the care of people we didn't know in the slightest and didn't trust in the least and oh yeah, there was that time she was in the hospital and my dad was off on a drunk and there was no food in the house except potatoes and the poor lady who'd been hired to stay with us pleaded with me (a child of what? five? four?) to let her take me and my brother to her house where there was actual food but I refused because WHAT IF MY MOTHER COULDN'T FIND US WHEN SHE GOT OUT OF THE HOSPITAL!? NO, JUST COOK SOME MORE POTATOES!

But you know, I still love potatoes so I don't know if that's a valid theory.

And probably, my hypochondria is somehow related to that, too, but really, you're not being paid as a therapist so I'll stop talking about it.

Except to say that when I start obsessing about all the deadly tumors I'm sure are growing in my body, I know that I'm not mentally quite well. I do have enough self-awareness to realize that the hypochondria is a symptom, not a disease in and of itself.

And it's all part of this generalized anxiety I get sometimes which I've talked about before, which I hate because it's such a buzzy, busy, never-ending, no rest-in-sight sort of mind warp.

I'd been suffering this anxiety/dying-of-at-least-three-diseases thing for days now and nothing was helping. Not the St. John's Wort, not the walks, not the yoga, nothing. Yesterday I thought I might explode from it, it was so bad.

And then...
Mr. Moon, who had been out of town on business, got home last night and as soon as I got my arms around him, the symptoms ceased. Just like a light switch had been thrown. Oh, I've had a few traces of it since then, but they usually come when I'm about to get a hot flash and then they disappear as soon as I begin to cool down, so essentially, I AM HEALED.

Which is odd because I've never been the sort of wife or woman who's well-being depended on the presence of her husband. In fact, I love my times alone.

But that's what happened last night. I was worried quite literally to tears and I'd lost every bit of any shred of a sense of humor and I was practically tripping on my anxiety and then he pulled up into the yard, I went out to greet him, we held each other tight, and boom, done.

Now I know that I'll go through the whole damn thing again. It'll happen. And I'll chastise myself and I'll try to talk myself out of it because really, the oddest thing is that I am not afraid to die. Hell, I never thought I'd live this long. And I've been with people when they died and it was not scary but actually beautiful and peaceful and so natural that it just doesn't seem like something to be afraid of. Although of course, what I'm really afraid of is that I'll have to go to a doctor who will want to see what's going on with my internal organs and get tests and shots and X-rays and MRI's and CT scans and more shots and the doctor will stand there with my folder open, my entire life and fate written in codes and numbers and values and he'll be afraid to look me in the eyes to tell me what all these numbers and values and codes mean and it'll really suck.

But for now, today, this minute, I'm not worried.

I know I'm dying in the sense that every one is dying from the moment of birth but I also know I'm alive and feeling pretty well and I'm not apt to have to see a doctor today.

And I wish with all my heart that by this point in my life I'd not be so crazy. So inclined to just go off into a sort of insanity which I feel I have no control over whatsoever, but just have to ride out and deal with until it's over.

Except instead of getting a beautiful new baby when it's over, I just regain the ability to function without constant fear which, in a way, means I've gotten my life back and so maybe I've given birth (once again!) to myself.

And here I am now, the world as green as it can be, the crickets thrilling me with their trilling, the sun spilling like gold into patches of light in the backyard and leaking into my heart, which is open and happy again.

Healed, perhaps by love, perhaps by holding on to the sanest thing I know, which is a man who was crazy enough to marry me which I know makes no sense but is just one of those mysteries of life for which I am almost unbearably grateful.
Posted by Ms. Moon at 10:43 AM