Life Is What Happens When You're Busy Making Other Plans 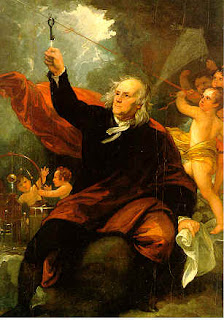 Or so said John Lennon and darn it, he was right.
We woke up this morning to rain and a very brisk westerly wind which would have meant a miserable trip across the bay. If you don't HAVE to, why do it?
So we spent our day here in Lloyd, doing yard work which was a very good thing since our power went out for about nine hours and we couldn't have accomplished much indoors. The power went out yesterday, too, which was understandable as there were tornadoes about five miles down the road and I hear that transformers were shooting flames out their butts, but that outage only lasted for about four hours so WHAT'S THE DEAL WITH THAT?
Who knows? When I called our power company, the lady was so incredibly nice and apologetic that it was hard to get huffy and demand to know just exactly what was going on and I didn't, even though her politeness seemed like nothing more than a company policy and strategy to divert and diffuse anger. I suppose it worked, although I really did want to tell her to come on over and bring a generator when she asked if she could do anything else for me before we ended our conversation.
Oh wait! I did tell her to bring over a generator and she just laughed and said, "Oh, I wish I could."
Right.
The man cooked most of the dinner on the grill and I lit the kerosene lamps and the gas log fire and called up a child or two to complain, bitch and vent, and then ta-dah! Back came the electricity and our lives were all just fine again. Light, TV, heat, wireless internet. All the things we count on so much that we don't even know it.
When this house was built, electricity was just a gleam in Ben Franklin's eye (okay, that's a lie but still- it hadn't yet been tamed and put into small household outlets) and they got along just fine without it.
And we would have gotten along just fine without it tonight too but it's nice that we didn't have to.
And so tomorrow, if the seas lay flat enough we'll be well and truly off to the island where we also have electricity and I suppose I'll live without internet and maybe I'll really get some writing done and my daughter and I will have a very, very nice time.
Well, that's my plan.
Who knows what'll really happen?
I'll let you know how it works out.
Posted by Ms. Moon at 10:03 PM