This Little Piggy Went To Market 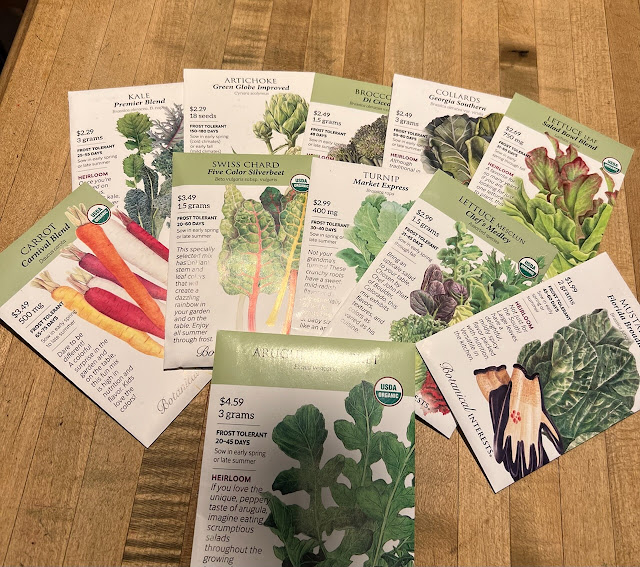 I knew I had to go to town today. The grocery list was threatening to need continuing on the other side of the page and I was starting to worry about finding the seeds I need and want. A friend had posted on FB that she was having a hard time finding the seeds for her fall and winter garden and there have been years when I've had to go to several places before I could get everything I needed and if that was going to be the case, best to get on it.
But oh, it was so hard to get motivated. The rather hopeless feelings from yesterday persisted today, although not as badly, and the idea of going to town was painful. I put it off as long as possible but finally I got dressed and drove the road to Tallahassee. I had to get my hormones and so I stopped at that pharmacy first. Then I went to a local nursery called Native Nurseries and found all of the seeds you see above which are the ones I wanted. I've never thought about growing artichokes before but why not try it? Remember the year I tried celery?
Well, it was a good effort, anyway.

I had a few more stops to make and then I took myself to lunch and sat and ate my chicken salad sandwich which really wasn't very good but at least I hadn't made it and sometimes that's really all you want. It's funny that I don't mind eating in a restaurant by myself in the least. Not for lunch, anyway. Dinner might be different.

Mr. Moon had expressed a yearning for boiled shrimp so I went to a seafood market where I got two pounds of the creatures and I will boil them for our supper. I feel truly and utterly out of ideas for meals at the moment and for him to express a desire for any sort of specific food is a gift.

And then to Publix and of COURSE I forgot to take my list with me so I asked my husband to please take a picture of it and send it to me which he did. Anxiety brain? Senior moment? Alzheimer's? Dementia?
Whatever. I am so very grateful for the technology to be able to easily get a copy into my hands when I need it.

I swear I got the very first feeling of a hint of a possibility of a whisper of fall today. It's been in the nineties, but there's that...something. Shifting of the light, perhaps. Something every bit as subtle as the air shifting around a blooming hurricane lily. A very delicate indication that a change is going to come.

Something that hasn't changed is the now all-too familiar despair  and disgust I feel as DJT once again appears to be flying free from a situation in which anyone else in the world would have been arrested and fitted for an orange jump suit. Is he so slimy that nothing can stick? Is his particular slime some sort of demon snot which protects him no matter the circumstances?
THIS MAN IS GOING TO RUN FOR PRESIDENT AGAIN! And I have no faith that he won't be elected.

Here in the south we love our okra which has its own share of slime but we know how to deal with it.
WE FRY THAT SHIT!

Not that I'm suggesting anything.

Still, worth a thought.