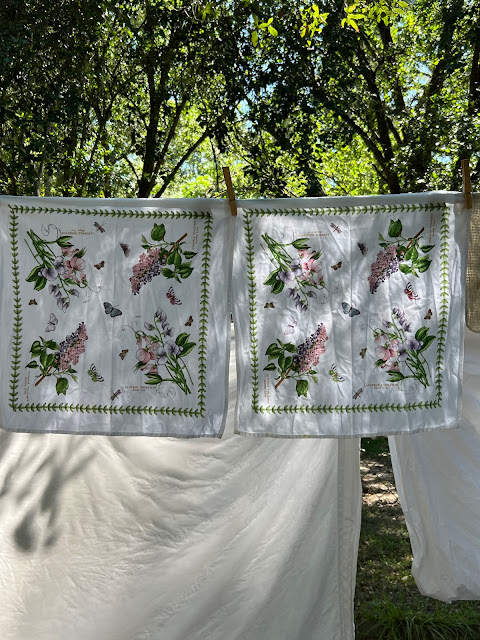 Another completely blue sky day and not quite as hot. I took another walk and it felt easier and less heat stroke-producing than yesterday's. I hung out the laundry including the sheets which are now dry and back on the bed, smooth as a white linen tablecloth in a fine restaurant.
I love our bed so much but clean sheet day is the day I love it the most. 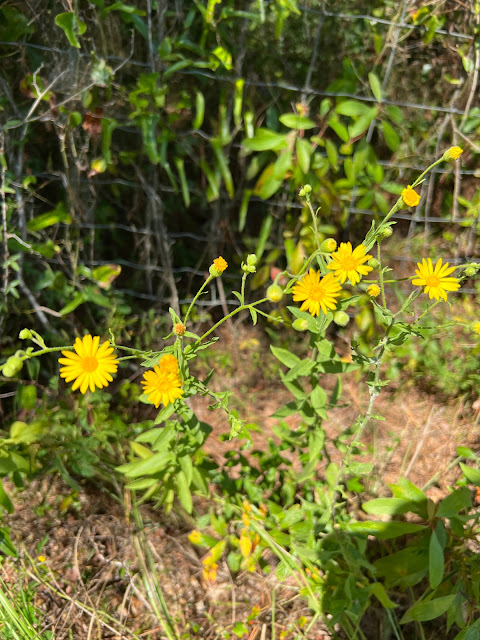 According to my plant identification app, this is camphor weed and I took that picture when I stopped to pee in a field that is sheltered from view of the road. The flowers did not mind my indelicacy, they simply beamed at me with their yellow faces, showing no judgement whatsoever. 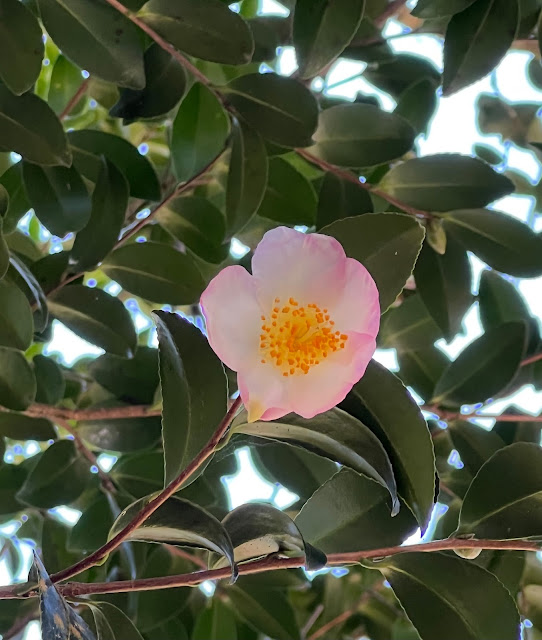 As I walked past my next door neighbor's house, I noticed a pink petal on the sidewalk and looking up I saw that the sasanguas are already blooming. I guess it is time. They are a variety of camellia and always flower first. Soon the tall bushes will be full of them and then the sidewalk will be as colorful as a pink baby blanket when all the petals drop.
I discovered something today. Some of you may remember that a long while ago the little cement block building in front of the post office was rented by a man and his family who turned it into a sort of general goods/deli place. It was called Papa Jay's. I had great hopes for Papa Jay but for some reason, the store never made it. I used to take Owen and Gibson down there to buy candy sometimes for a treat and it WAS a treat. Papa Jay's mother would sit outside on nice days and crochet hats which he sold in the store. I do not think many people bought those hats.
So Papa Jay packed it all in and that was that for him but I've noticed in the last six months or so that someone was working on the building. I've seen a golf cart and a truck there, people going in and out. A ramp was built up to the entrance. Flowers were planted by the mailbox. 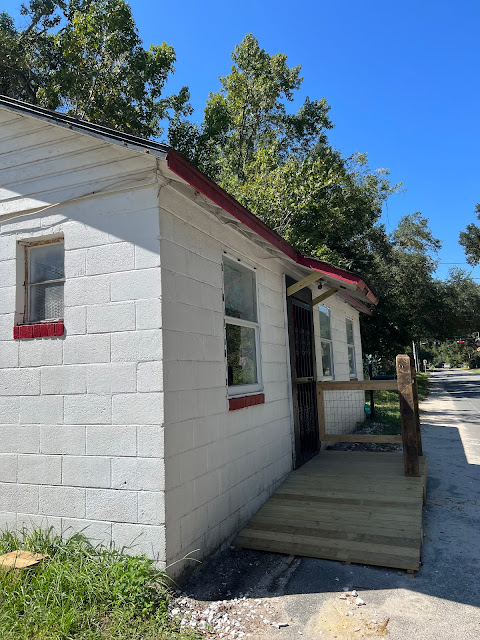 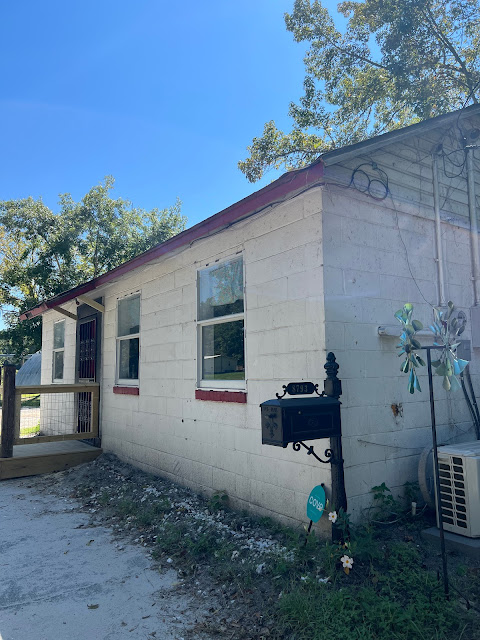 No matter what anyone does to that building, it's still a funky place. Anyway, I had heard that a woman was making it into a shop of some sort. So today, since no one was there, I decided to peek into the windows. There are small succulents in various funky containers on the windowsills and although there is not a whole lot to see yet, I did spy items which make me think that this is going to be a sort of hippie/Indian import shop. I saw a paper star lamp and a rack with a few kimono-like jackets on it, what might have been a Guatamalian bag hanging, and a table with what I am almost certain was a full display of artfully arranged small bottles of essential oils.
Whoa!
To think that I can buy my essential oils a block from where I live is simply astonishing! Because- you know- I buy so many essential oils.
This is cracking me up. Who the hell is going to come to Lloyd to buy paper star lamps and essential oils? The FGD Dollar General has stuff people need and they have so little business that I'm not sure of their survival. But who knows? Perhaps they're about to build a giant planned community over there on the other side of the interstate and all of those people are going to need a reputable place to purchase the little things that make life so delicious. Perhaps it will be such a cool place that folks will exit the interstate just to shop there.
Who knows?
Not me.
I think it may be a vanity project for the woman I've seen going in and out. I told Glen that I would say she was an "older woman" but in fact, I doubt she's as old as I am.
I texted my kids about this today and May wrote back, "Maybe the woman is really a witch and the place is just a front for spells and potions."
Now that is something I could truly get behind. Leave it to May to find the silver lining. The magical silver lining. She is so good at that and has been since she was a tiny child.

So that's the big news from Lloyd today.

Here, for your viewing pleasure, are two pictures of the mantelpiece  altar in the library. Sort of altar. Place with meaningful and random objects is more like it. 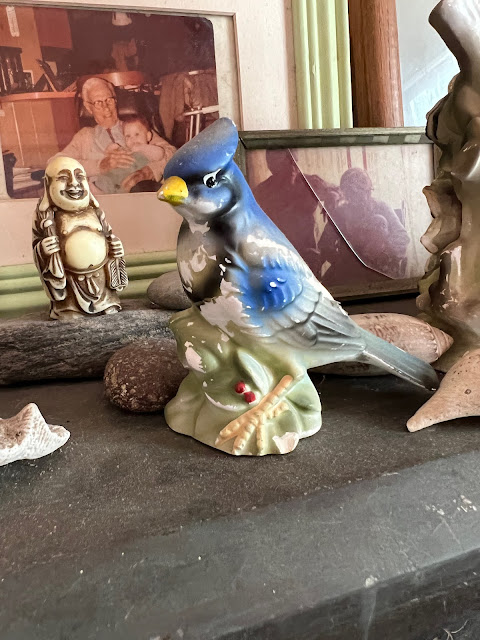 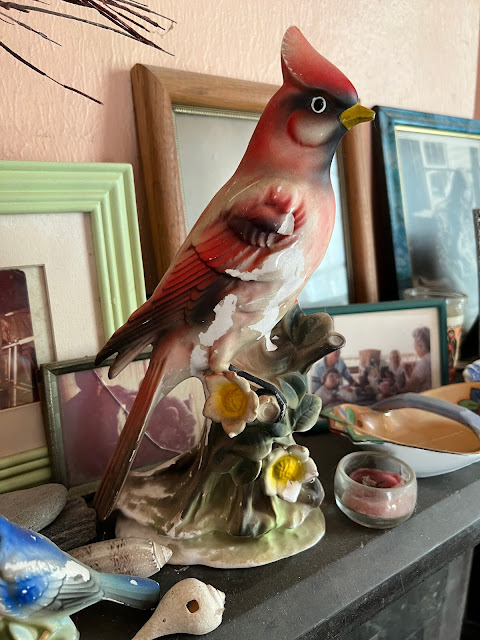 I sort of forget it's there.