Paper Bag Day- Reach In And Find A Subject! 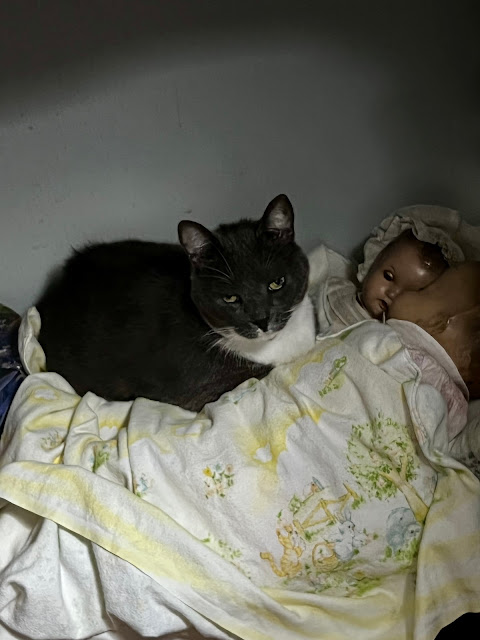 Almost every night Jack is either waiting for me on the bed or else he follows me in when I go to get ready for bed. Last night he came in after I was already in bed and instead of jumping up to be with me, he went over to where I had put the dolls to sleep and began sniffing them. I was not surprised at this as Hank and Rachel have cats and I figured that Jack was investigating the strange cat smell. But then this happened. 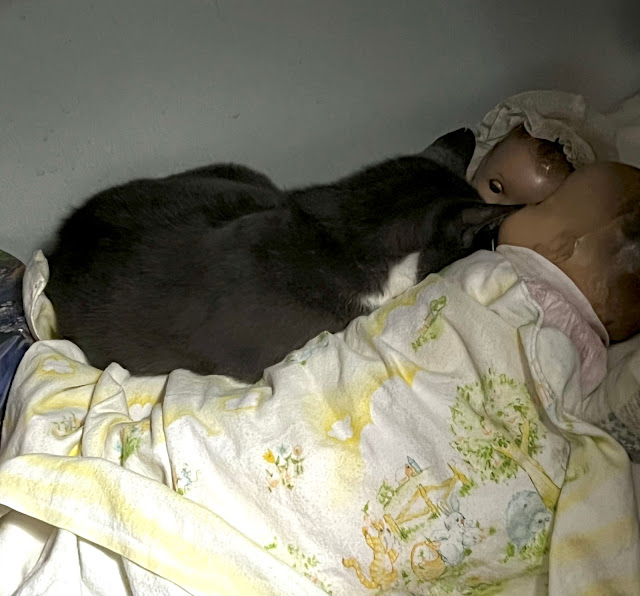 He settled in between them and went to sleep. He's never slept with Dorothy Anne on her pillow bed before that I know of. I found it charming that he decided to snuggle them.
I would say that he's a strange cat but in reality, all cats do things that we humans cannot truly understand. That is just their cat-ways. And I honor and respect that. It is often interesting, sometimes annoying and generally never boring.
It rained here all day long, on and off. Mr. Moon and I even discussed going to a movie which we do about once every ten years or so. We looked at the movies showing and although one looked fairly interesting ("Honk For Jesus. Save Your Soul"), it was only showing at noon (which was too soon to make it) and five-something.
Nah.
A Brad Pitt movie ("Bullet Train") was showing but it had gotten bad reviews and there appears to be a LOT of violence in it.
So, no.
Other choices were either super hero movies which I just don't enjoy or the the new Top Gun movie and no thank you for me on that one, and one that appeared to be about a guy with disabilities who adopts a monkey as a service animal and I suppose miracles occur and tears flow.
Nope!
I am the pickiest movie watcher.
We decided to make our own popcorn and choose something on offer to us with our ten thousand streaming services and watch from the comfort of our own couch. Of course, the problem is finding something that both my husband and I can watch without one of us hating it which eliminates approximately 95% of all movies ever made. So we ended up with a silly Kevin Hart/Mark Walberg thing and although yes, it pretty much sucked and was ridiculous, there were some good lines in it. The main theme of the movie was gender role reversal and oh yeah, it's so funny when a man is the one who stays home with the children and does all the housework and childcare and PTA and school volunteer stuff and yet still feels somewhat...unfulfilled.
Tell me about it.
So that was our big day.
The popcorn was good but a little too salty.
We finally got the Birds of Paradise I bought last month planted in the beautiful green pots that Glen got me for Mother's Day. The plants look a little sparse but they will grow. 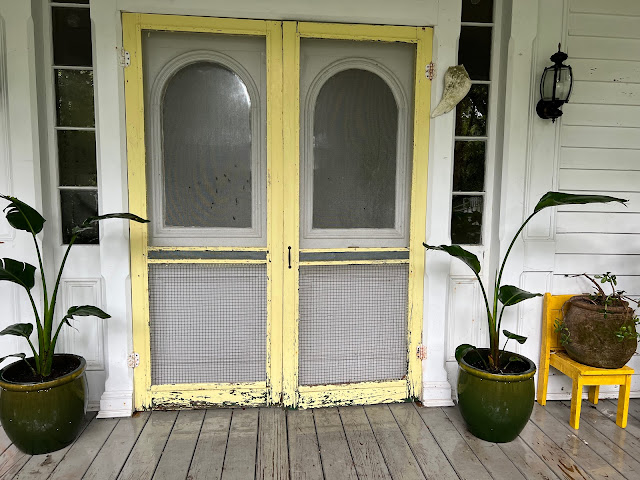 That poor jade plant on the right is where Liberace was roosting when the fox snatched him, or so we believe. Anyway, it looks sad. I used to have the most magnificent jade plant but when we moved here, I never found the right place to set it and it failed and failed over the years until finally it died.
I still feel guilty about that.
The one good thing I can think of about not having free-range chickens is that I don't have to worry about where I put the plants that they love to nibble on. I can now grow begonias again.
This is cold comfort but it is something.
Lis emailed me this morning with a link to our new house. Lis and I have a long and deep-seated fantasy that she and Lon and Glen and I are all going to move in together at some point. I think this is a very practical idea and we are always casually looking for the perfect house. This could be the one. 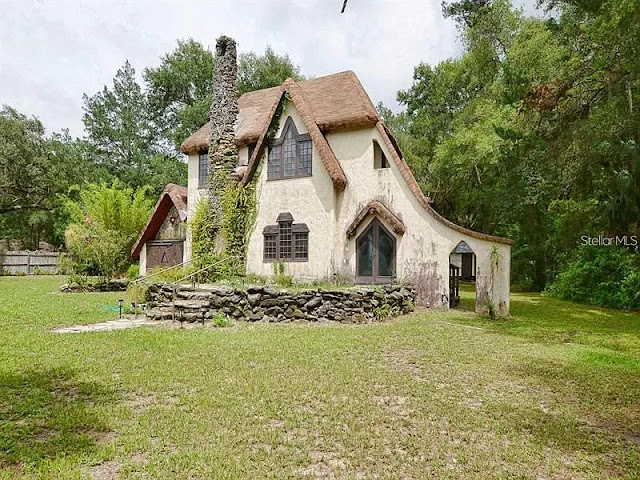 Hopefully, gnomes are included. We've already added (in our heads) a pink coral swimming pool. If you go to the link above, you can see it in its glorious entirety. The house is located in Mount Plymouth, Florida, which neither of us had ever even heard of.
And with that I suppose I will finally be quiet. I'm going to make pizzas for supper. I had a small cheese-and-tomato toast around 11:45 this morning for my breakfast, popcorn at 2:30 for my lunch, and I suppose I should be hungry now. I'm sure my husband is.
Just as with not being able to have free-ranging chickens is allowing me to grow begonias, having anxiety definitely will curb an appetite.