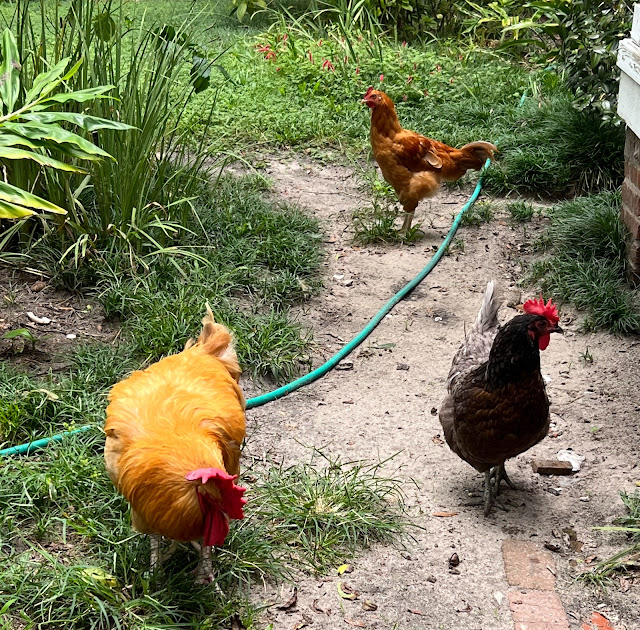 Well, here are the last three standing. Bless their hearts. I suppose I should name the young'un. It could be Dr. Pansaloony but I think perhaps we should just call him Lucky, at least for now. And I am certain he's a rooster. Those three have cheered me all day and it is wonderful to have them roaming about again. Every time I see them I smile. Ms. Gracie even left me an egg in the pump house which I found when I went to collect my clothespin bag.

Thank all of you so very, very much for your sweet messages of condolence. Some of you have been with me for my entire journey in chicken-tending which is a sort of comfort in itself. Glen and I have both been despondent over the horrible deaths of our hens. And we keep asking ourselves- why now? After all of these years. As Ellen said in her comment, we have lost a few over the years to predators but nothing like this. And I don't think that the raccoons and foxes and possums are starving- it's been a good summer with plenty of rain and I'm sure there are rats and rabbits and other small animals galore for them to satisfy their hunger. Have they all just become aware of the tasty chickens here on the Moon property?
Doubtful.
I have no idea.
And we've had the same set-up forever. Same coop, same hen house, same doors.
I don't think we'll ever really know although I do feel certain that there may be at least two foxes who have made a home in the back of the property by the railroad tracks. Probably with a family. Across the tracks there's a large piece of land that is swamp and woods. There's no way we can control what comes from there.
So for now, we go on. And perhaps we will figure something out before next spring when it's time to buy new chicks. I just don't know.

I took a walk this morning. I knew I had to for all the right reasons. It wasn't a long walk but I wasn't looking for a way to torture myself. I just needed to move and I did. I hung out the laundry and I worked on the dress I've been trying to make for Lisi. After a couple of hours on it I decided it was completely FUBAR and set it aside and put the sewing machine and my pins and scissors away and put a tablecloth on the table. Gibson is coming tonight for his turn at Mer and Bop's and perhaps we'll eat dinner in the actual room we have dedicated to that activity although we so rarely eat in it.

So it's been a quiet day, not and humid, although it started raining awhile ago and is still drizzling. I want so badly to get back into the garden and I will do that this weekend. I swear it! There are weeds to pull and sweet potatoes to find.

I got a text from Rachel yesterday asking me if I'd like her grandmother's doll which she has been keeping, wrapped in bubblewrap for a long time. She sent me this picture and reassured me that if I did not want it, that would be fine but she thought she'd offer. 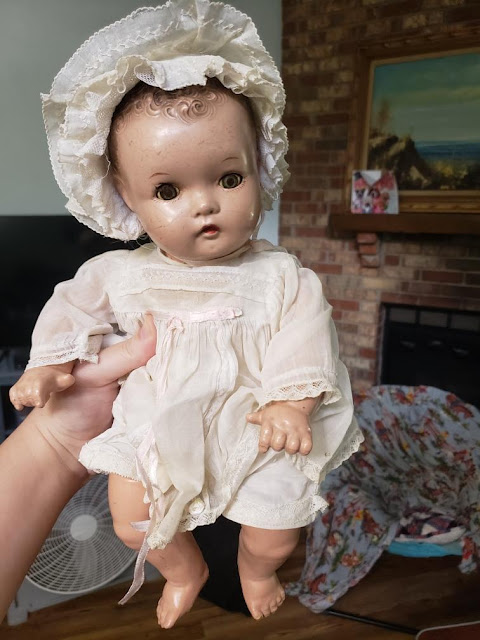 I texted back that I would very much love to adopt this baby and I am excited to think that Dorothy Anne will get a sister. They are very similar, made of the same things- cloth and composition. She was made by a different company but obviously of the same era. 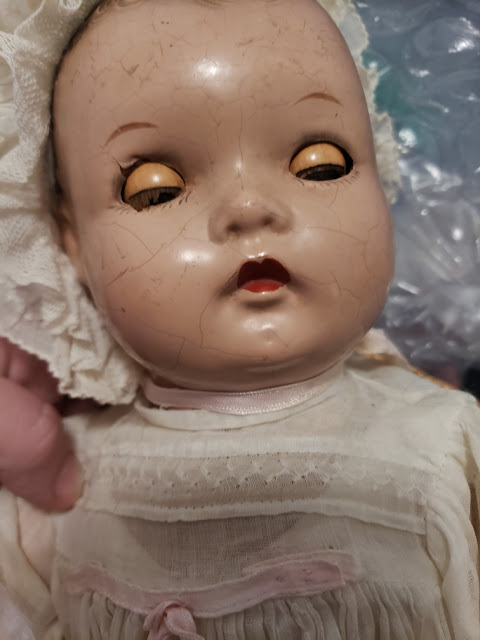 This one even has head damage like Dorothy Anne's. I am looking forward to getting her, washing her clothes, and tucking her up beside Dorothy Anne. I am sure they will have a lot to talk about.
I told Mr. Moon that we would be getting a new doll child and instead of laughing at me, he said, "Well, you should be able to have as many dolls as I have deer heads," which I thought was very sweet of him. Not that he's "allowing" me to keep old dolls on our bed or in our room, but because he understands that these old babies mean something to me. He knows he doesn't need to understand what they mean to me, which is good because I don't really understand it myself, just as I have no concept of why he would want deer heads on the wall or why he would want to shoot a deer in the first place but that is not important. We just recognize and respect the things that are important to each other and accept that they are.
In this case, I have a feeling that both deer heads and dolls represent something very primal in each of us.
Oh, humans are funny and mysterious beings, aren't we?
I better go make some meat loaf (out of venison, by the way) because that is what our Gibson wants tonight. Also, boiled potatoes. I can do that. It will be good to have that sweet boy here tonight.
And here's one last picture. Jessie sent it to us all and called it "the Cherry picture of the day." 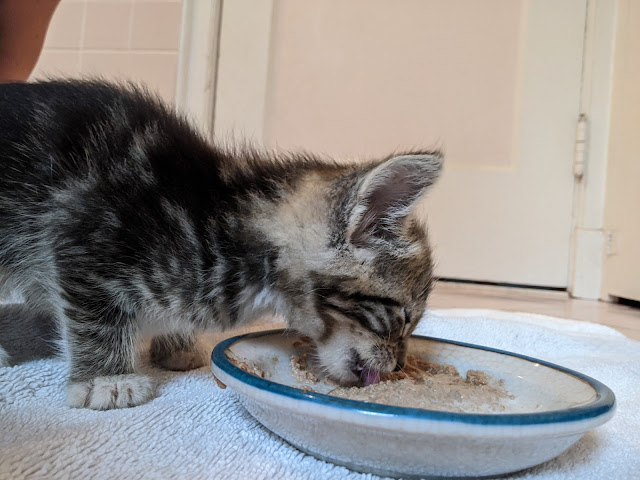 Okay, okay. She sent two pictures. Hell, let's post the other one too. 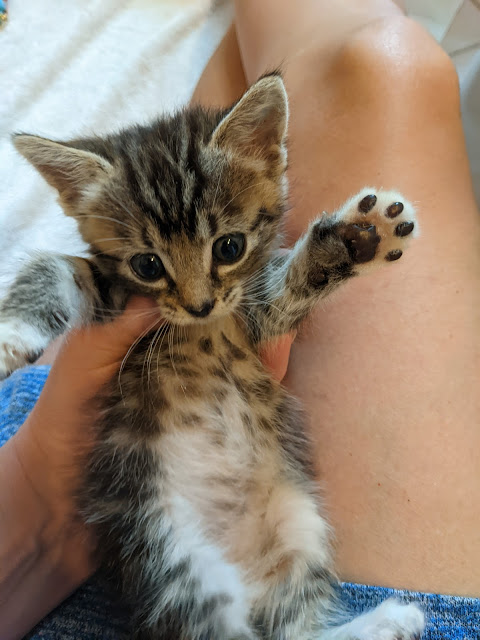 Would you look at that sweet baby tummy with its spots? She is such a lovely kitten.
Happy Friday, y'all.
Love...Ms. Moon
Posted by Ms. Moon at 6:06 PM