Yesterday's major decrease in anxiety was a temporary thing, I discovered this morning upon awakening. I am now in the hanging-on-by-my-fingernails, white-knuckling-it phase of it being two days before my doctor's appointment.
Not to be too crude but I am fucking quaking here although I am trying to act "normal" which I am pretty darn good at because I am obviously an Oscar-winning-level performer. See how jokey all this sounds?
Proof.
I know I've said this before but despite me trying desperately for most of my life to get to the root of this doctor anxiety, I simply can't. I know I've had it forever. I can distinctly remember feeling what can only be called terror when I had to accompany my mother to the doctor's office for an appointment of hers. It may simply be a matter of shots. I do know that I got hysterical when I got my first flu shot and the second one too. It took my mother and a nurse and the doctor to hold me down. But I have no problem getting injections now. It may have started that way though. And when I was a kid, you got a damn penicillin shot every time you went to the doctor, no matter what your problem was. In the butt.
That could be a clue.

So. La-di-dah. It'll all be over Monday by noon, most likely, although another thing not helping with my anxiety is the fact that we very well may be getting hit by a category 4 hurricane next Thursday or Friday. Things are just not looking good for us. Or Cuba. 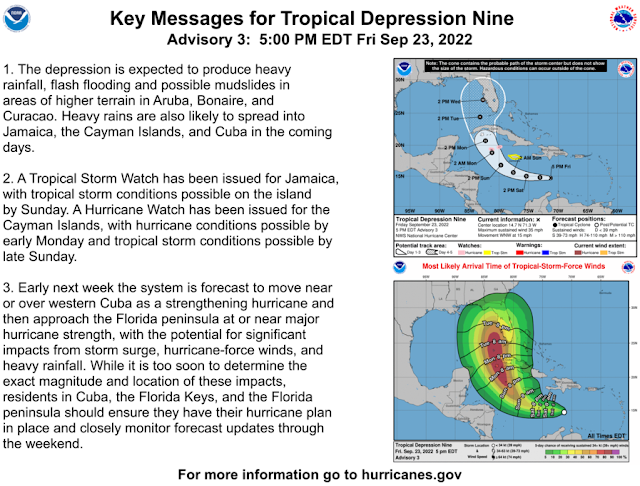 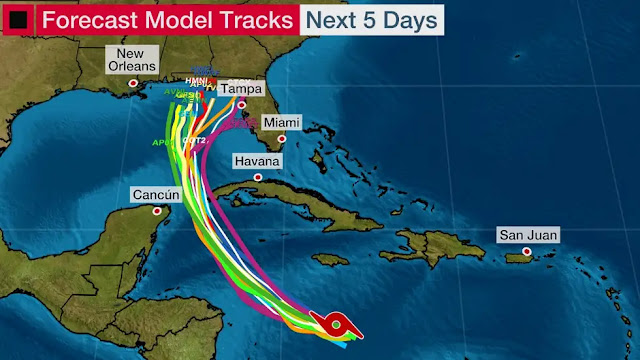 The temperatures in Gulf waters now are at a record high (huh- go figure) and although at this moment, Ian is only a tropical storm, there seems to be no disagreement on the fact that it will become a hurricane, fueled by the hot seawater as it passes over. And as you can see from the spaghetti model, there's not much disagreement on the general area it's going to effect, either.
Aw, shit, y'all. I hate this. This waiting to see and then trying to prepare and the dread and the worry...
It's not my favorite part of living in Florida.
We are in a good position here in that this house has been standing for 163 years and is strong and is sturdy. Also- we have the Cadillac of generators and if the power goes out (and if we get a fairly direct hit, it surely will) we will not suffer from no electricity. Also, we are on "city" water so we'll have running water.
We are so lucky!
But if you've ever, EVER spent a night listening to winds over a hundred miles an hour blowing outside with rain pouring down in amounts you did not know possible and the sound of trees crashing all about you, you know that no matter how good you have it, it's still a terrifying experience.
Ooh boy. This is not helping my anxiety.
I tried to deal with things today by getting in the garden and weeding. I did that and while I was out there, I pulled more sweet potatoes that had already sent up more shoots and leaves. Most of them were just little ol' skinny things, not worth keeping, but I do have this one rooting in a glass vessel that came in Linda Sue's last box. 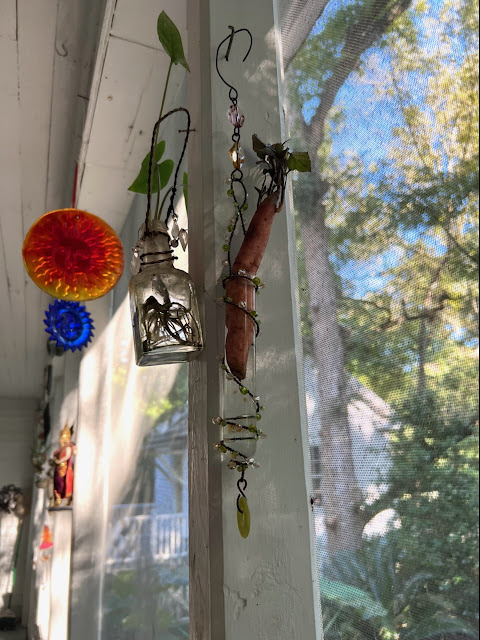 "Is that a sweet potato?" asked Mr. Moon.
"Yes," I said. "I am going to root it."
"That shouldn't be too hard," he said. We will never, ever be rid of all of the sweet potato vines in the garden and that's just the truth. They are voracious growers!
The arugula will need thinning this week if I get around to it and I will be throwing those tiny sproutlings into a salad where they will spice it up, despite their tiny size. That is something good to look forward to.
And oh! Lucky crowed today. So there is no more doubt in the world that he is a rooster, as if there any doubt about it before.
So that's been our day. I've felt like it was Sunday all day long with my feelings of dread and existential angst. How I love a weekend with TWO Sundays.
Hahahahahahahahahaha!
I went to the FGDDG a little while ago to buy milk and half and half. I am going to make some comfort food in the form of snapper flakes au gratin, hopefully like they used to make at the much loved and much mourned Angelo's restaurant downtown. The guy who checked me out at the Dollar General was a fine-looking young man with tiny braids. I asked him how he liked working there and he said he likes it very much. I'm glad of that. I told him that it was weird but nice to be able to buy things like milk and half and half in Lloyd. And it is. Both. While I was there I saw one man buying one cigar and one woman buying a few food items and a large container of laundry detergent.
All right. Off to make a lovely sauce and a nice salad. I really do make good salads and soon I will be making even better ones from the garden.
If a hurricane doesn't rip my baby greens out of the soil in which they live, causing lettuce infanticide.
I may pour myself a large glass of vodka too.
Love...Ms. Moon