History Along With The Here And Now 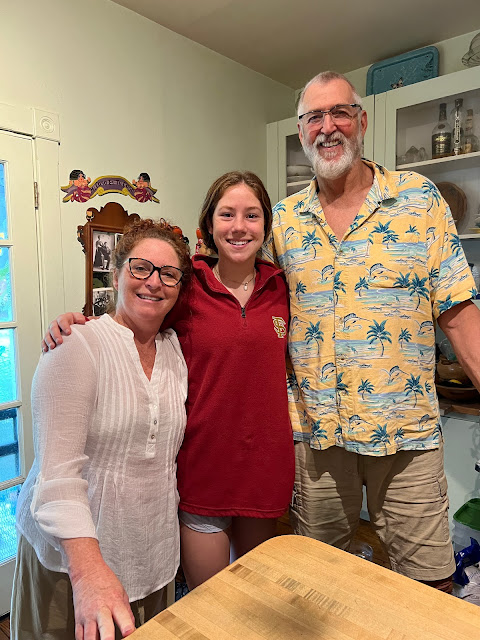 A long, long time ago, back when I was still a relatively young mother, I had a tendency to caretake in a way that I really do not understand these days. Some of it was rather thrust upon me- I had a very good friend who got cancer and she stayed with us in our house on a street in Tallahassee quite near where Jessie lives now. We had a guest room off the kitchen which seemed odd but it was a nice room and the walls were painted a heavenly shade of blue that I came to believe was healing in some way. My friend with cancer did not live so very long but for awhile she stayed in that room and I fed her with nourishing foods and made sure she was comfortable. May stayed in that room after she was hit by a car and couldn't climb the stairs to her own room and that was one of the hardest and most intense and tenderest times of my life and I can still barely stand to think about it.

In the very early nineties, a very young woman I knew got shot in a robbery and for some strange reason, I felt compelled to take her in after she was released from the hospital. She had been gravely injured and needed serious nursing care. She had a deep wound that had to be irrigated and packed with gauze every day. She was as helpless as a small child. Her father lived in Tallahassee but he was, well, a man who was in no way able to care for her. Her mother lived up north and I suppose they were not very close and although she did come to visit, she wasn't in a position to tend her daughter either. And so, somehow, like I said, I did.

Jennifer. The girl's name was Jennifer. She was a beautiful woman and had a large group of friends and they would come and visit her at times and one of the friends was a girl named Lisa. Lisa and her boyfriend had actually been with Jennifer when she'd been shot.
I fell in love with Lisa. And her boyfriend, truthfully. They were the most darling people and became, along with Jennifer, part of the large tribe of our family.

It's so strange to think of those times now. My life is so very small and solitary except for my family, and when I look back on that life I had then in that house with four children, a spare teen or two generally staying with us who had gotten kicked out of their own house, friends coming and going at all times of the day and night, I cannot believe I am the same person.

But I have stayed close to a few of those people. I may not see them very often but there is no doubt that we are still in the same tribe. And one of those is Lisa, whom we call Lisa-Lisa, Red Headed Lisa Whom We Adore. I was with her when she had her daughter Grace, that gorgeous grown-up girl in the picture above. And she and Grace and her son Cameron came and stayed with us five years ago when a hurricane threatened Tampa where they live.

Lisa texted me yesterday that she and Grace were in Tallahassee and would I like for them to pop by on their way home?
Oh yes. Of course.

And so this morning they did indeed come by and it was so good to see them. Grace is a high school senior, a volleyball player, most definitely interested in studying psychology, a darling girl. She is going places, that one. It was a good visit. We caught up and laughed and there may have been a few tears.
Lisa-Lisa looks exactly the same although of course life has changed her in many ways that looks have nothing to do with. I am proud of her. If I have any right to say that. She's been a yoga teacher for many years and works with vets with PTSD and the elderly as well as pregnant woman. I know her students must love her and they are lucky to have her.

After they left, both Mr. Moon and I lazed around as supposedly one is supposed to do on a Sunday. Yesterday's gardening wore my ass out and he did a lot yesterday too. Finally, after all of his toil and trouble and work and watching Youtube videos, he started the Camaro he's been working on for two years. He turned the key and it rumbled into life.

Y'all- he is so proud of this. And he should be! He still needs to do a lot to it to get it all running right but it was a dream of his and he absolutely made it happen. He sent me a video (I was in the kitchen cooking our supper) and I took shots of tequila and slices of lime out to the garage to knock back in celebration.
Oh, this man. He can fix almost anything, build almost anything, till the soil, change the oil, take care of the family, and keep this crazy wife of his as happy and as sane as anyone could.
I started another dress for Lisi and I think this one will work. I am enjoying this project so much.
We watched last night's trail cam videos and captured on it was not only a fox, walking past the henhouse as if it owned it, but a doe. We have deer in the yard? I guess we do. Once, and only once, have we seen a print in the yard but here we are.
I've had this song stuck in my head all day which has been an interesting pleasure as I've sung it softly to myself, the minor key of it winding a sort of enchantment. I offer it to you in case you need that sort of an ear worm. If not, don't watch it.
Love...Ms. Moon
Posted by Ms. Moon at 6:27 PM