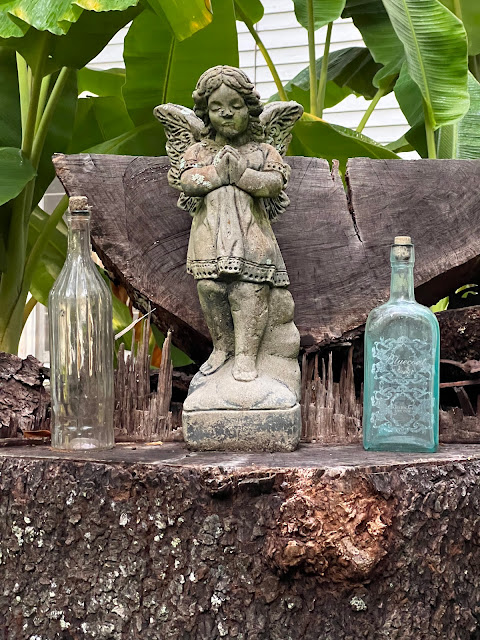 I have been as lazy as an old river today and it hasn't bothered me in the least. Perhaps because it's Sunday. Who knows and who cares?
Not me, sugar.
I was just not up for working outside today. Too damn hot and too damn muggy. I had planned to sweep the front porches and made a conscious decision to forget that shit. I just could not deal. I did hang out clothes and then later on in the afternoon, we got a quick, hard rainstorm that I ran out in to get the laundry off the line and got personally drenched and then it almost immediately stopped raining.
Oh well.

I had some dreams this morning. Whoa! I was going over them in my head while I was making our traditional Sunday brunch (and it was a brunch because it involved melon which I think is part of the definition of brunch) and I remembered a scene from one of them which was extremely odd and I am not going to relate it here because taken on its own it might be proof in a court of law that I am insane and also because it is sort of scary and possibly triggering for some people.
It was most likely just my brain coming up with its usual strange and mysterious scenarios but if not, it could be my psyche throwing me a hint as to why doctors' offices and all things medical scare the living hell out of me. I have absolutely no memory from my childhood that could explain the dream but as we all know, we can and do block things that are too painful to recall.
I have no idea if this is the case here. I've always said that my problem isn't that I have repressed memories but that I have too many memories that stick around like gum on the sole of a shoe. I've heard more than once, "Oh Mary, that never happened," from two family members but as I said to them, "Look- my imagination isn't THAT good."
So I have no idea. But I will continue to ponder the dream and its possible meaning, of course.

I'm listening to a book that isn't great but isn't terrible which is sort of the worst kind of book because if it was terrible I would just send it back to the library with no regrets but if it's tolerable enough to listen to, even if it's not that enjoyable, I feel somewhat guilty about returning it unfinished. One of the aspects of the book that is not great is a stepfather/stepdaughter relationship which has possibly triggered me some. Of course every situation is different but the grooming by the predator and the feelings of the victim are always essentially the same, I think, even if they vary greatly in detail.
In a different dream I had the other night, my stepfather was doing something not necessarily predatorily but he was touching my hand.
"DO NOT TOUCH ME!" I screamed at him. It's so hard to believe that over fifty years after the fact, I still dream at least weekly of the man and it is always, without fail, frightening. Sometimes terrifying.

Anyway, la-di-dah. This is the way of it, at least for me.

I am pretty excited that tonight we will be able to watch the first hour of a BBC documentary series called My Life As A Rolling Stone. It's gotten terrific reviews and I can't wait to see it. It's only just available here in the US today.

Part One is Mick's hour. Of course Keith has my heart but I freely admit that without Mick Jagger, there would not have been, would not BE, The Rolling Stones. Also, ain't nobody could move like Mick.
I'll report in with my thoughts on the matter tomorrow.
Love...Ms. Moon
P.S. The peach preserves are delicious and I think the extra lemon juice gave them the most beautiful golden color imaginable. I am not disappointed in them.
Posted by Ms. Moon at 6:19 PM