Those Words- I Love You 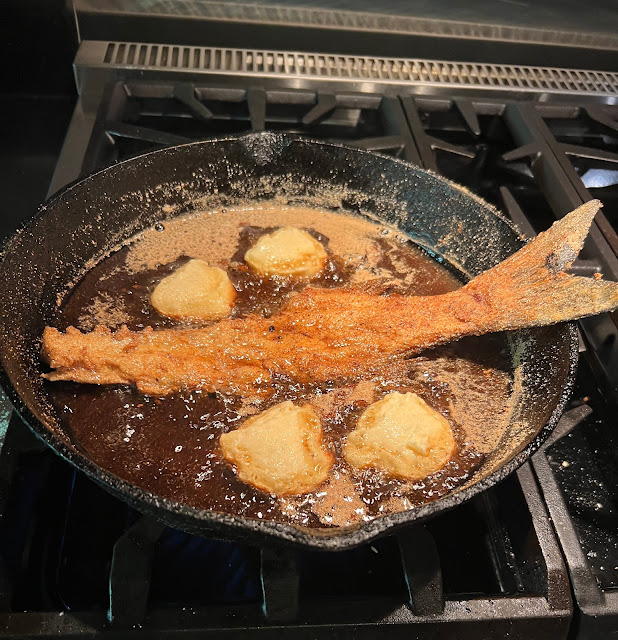 I sent that picture to my kids last night with the text, "I feel like a real Meemaw. Fried mullet and hushpuppies."

Some of y'all may never have had the good fortune to eat fried mullet, just caught that day. It is a treat. You fry the filets AND the backbone which you can scrape tiny morsels of deliciousness from while the filet itself is a fine piece of good fish. Mullet is probably why, in this part of Florida, at least, early settlers could sustain their lives in such a rugged area. And I am sure that the Indigenous people who lived here ate plenty of it too. It's a fish that has protein and a bountiful goodness of healthy oils. It is a fish that is netted, not caught on a line, and although it is still fairly abundant, back before we fucked up everything, it was VASTLY abundant. The fish can live in both salt and fresh water and when they run, fishermen bring them in. They are excellent smoked and so in that way were an important food before refrigeration.

And get this- dolphins hunt mullet and sometimes they do it by herding them to shore where they beach themselves and eat like kings. Here's a video from BBC Earth.

My husband and his father actually witnessed just such a hunt once while fishing in the St. Mark's river nearby.
So. Mullet. There's a lot more I could say about them but for now I will just say that the ones I cooked last night were delicious. The hushpuppies? Eh, not so much. For some reason I've never really perfected those. Probably because I so rarely fry foods like that. But I will say that a perfectly cooked hushpuppy is a gift from the gods of corn and campfires.
Today has been a very decent Sunday. Our friend Chip came over to help Glen with something motorcycle related or vice-versa. Not sure. But I do know they took a long back-roads ride and I think they enjoyed it. I did a little work outside, but not much. A dang chicken knocked over a potted fern last night, breaking the pot, and I had to deal with that- repotting, moving to a different location. I'm not sure why that chicken was so attracted to that plant. I don't think she ate the fern fronds but perhaps there was something in the dirt she liked. It was always the same hen that I was having to shoo off of it. I moved it to a higher plant stand on the front porch and then ended up sweeping the porches.
Here's the new unicorn pillow. 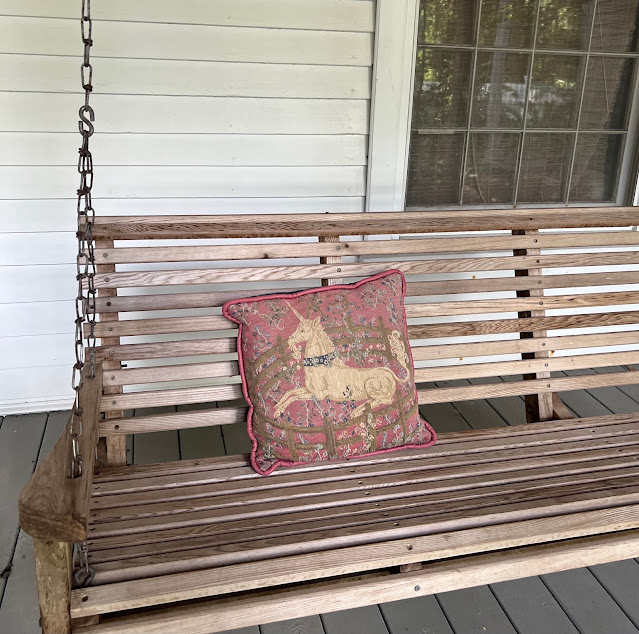 You will no doubt note that this is a more traditional unicorn rendition than the ones that August has on his shirts, his back-pack, his socks. Oh well. There is room in this world for all the unicorns, I think.
There were quite a few fallen limbs in the front yard from these little storms we've been having and I hauled those to the burn pile. And that was all I could manage without losing so much of my body water in the form of sweat that I died.
While I was doing all of that stuff, I was also doing laundry and I took Dorothy Anne's dress off to wash it and underneath the dress I found a beautiful handmade chemise that I am sure was made for a real baby, like the dress she came in. 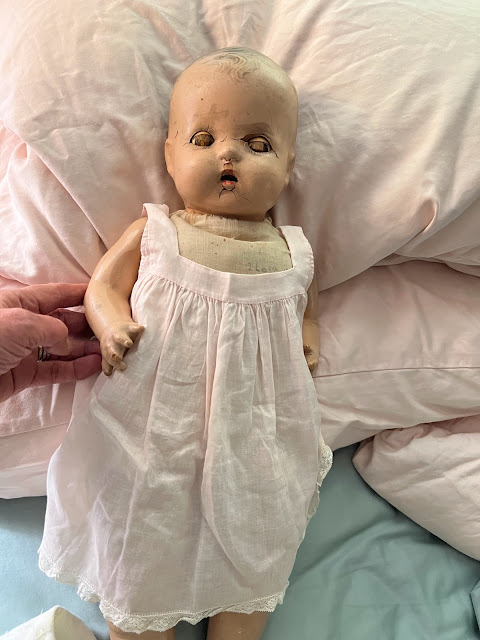 BUT, the thing that just broke my heart wide open was underneath that chemise, right on her heart-place. Can you see it?
Here's a close-up. 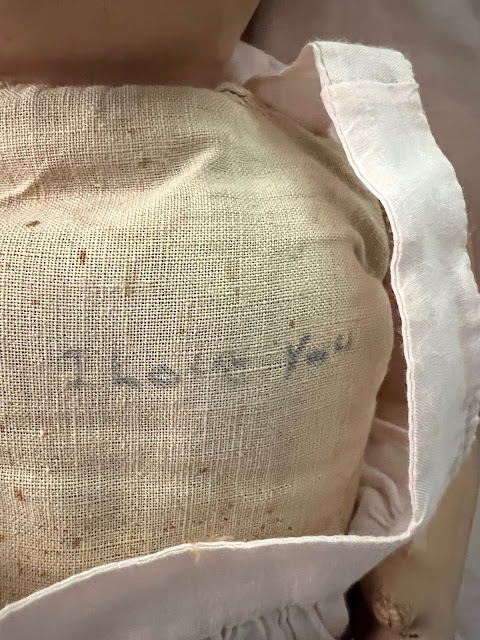 Oh, how I would love to know the story of the child who loved this dolly. What she (I am assuming it was a she) called her. Was she a lonely child who saw this doll as a companion, a friend? Did she take her on adventures, climbing trees and playing in the garden? Did they have tea parties? Did she bring the doll with her to bed, holding her close in the deep, dark night, giving her the love and protection that she herself wanted and needed?
Yes. I am completely and utterly projecting my feelings as a child to that little girl as well as projecting my feelings as an older woman to an inanimate object. When she was upstairs in that dark room in the antique store, I recognized what it felt like to fear abandonment, being  discarded, to feel unworthy of love when all of the sweet beauty and attraction of newness had long since passed.
I have not entirely lost my mind. I think that I am going through something that is completely normal and explainable as I age. I am so very fortunate to have a partner, children, grandchildren, who appear to love and cherish me for who I am now, as well as who I was so long ago. But that does not prevent me from having the fears of abandonment, of being considered too old and creepy to deserve love.
And then there is this- yesterday when Jessie was driving me home and we were going through a torrential rainstorm and I was holding Dorothy Anne, on my lap I said that I truly was an old woman now, as I reported yesterday, she said, "I think that when we get older, we become little girls again."
That phrase, "little girls," absolutely grabbed my heart and my attention. I'm not sure I ever really got to be a little girl. Now, perhaps, I feel safe enough to sort of experience that.
Whatever. Maybe I'm just crazier than I thought.
But I am still glad I rescued that creepy, demonic doll and brought her home.
She has a home.
So do I.
Love...Meemaw Moon
Posted by Ms. Moon at 6:50 PM