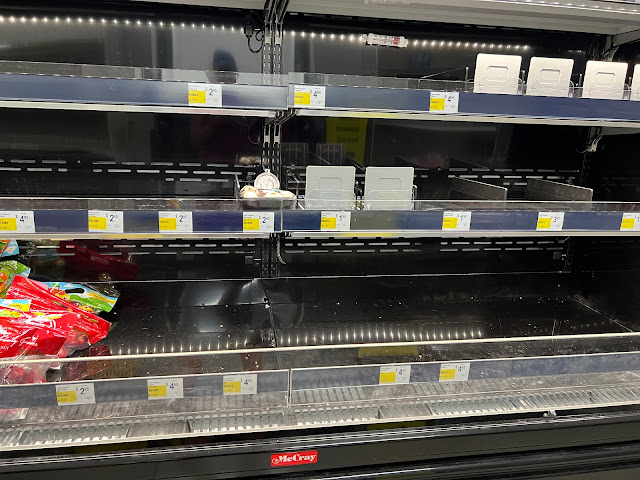 Well. I spoke with my across-the-street neighbor yesterday and she told me that she'd been in the GDFDG and that they do have some fresh produce as well as other groceries. I was a bit surprised to hear that but also glad. So this morning I included a visit to the store in my walk. Why not? I've not stepped foot into the place since it opened, of course, but my presence there is hardly tantamount to my blessing.
I was hot, sweaty, and not smelling like a rose when I walked through the automatic doors. I was holding my walking stick. I suppose someone might have been taken aback if they had noticed me but I really don't think anyone did. There only seemed to be about three people in the whole store and that included an employee. There may well have been more. I didn't walk through the whole thing.

As I entered the store I saw the refrigerated space where there WOULD be fresh produce had they actually had any. As it was, there were only empty spaces and a few bags of apples. I've heard that Dollar General is famous for understaffing and that may have been the problem. There could have been fresh produce in the storeroom and no one had had time to set it out.
Who knows?
Not me.

Anyway, the entire length of the right side of the store was taken up with refrigerated and freezer cases. I honestly only breezed past things but there were items like cheese, yogurt, hot dogs, frozen pizza, Hot Pockets, and other assorted things, most of it not very damn good for you. There was also milk and ice cream. And I'm sure a lot of other stuff. The aisles were partially taken up by stacks of products needing to be shelved and the shelves were definitely in need of restocking. A large part of the store is taken up with grocery items like bread and peanut butter and all the regular stuff you'd see in grocery stores. An entire case of energy drinks seemed to be pretty well filled.

As I said, I didn't walk through the whole store. I think what I did see was such a shock to my system that I couldn't handle any more. The very idea of retail items for sale in Lloyd is overwhelming. For so many years, decades, in fact, the only place to buy anything has been a locally owned convenience store that really does not have much of anything and charges out the yang for the few things it does carry. Beer, milk, ice, chips, etc. And I can pretty much guarantee that one of these days I will buy something from the GDFDG. We'll run out of milk or Mr. Moon will have an emergency ice cream need or...well... I don't know. I've lived here for eighteen years and haven't died from lack of frozen pizza yet. But it is annoying to have to make a trip to town to get that one thing you just have to have.

And let's be honest- there are people who live in this little community who do not have easy access to get to a real store and this store, as much as I hate it, will fill a gap.

So there's your report.

My walk this morning was slow. When I woke up my hips hurt badly and one of them felt as if maybe I was having a sciatica attack. So that informed my pace. I doubt there was much cardiac benefit but at least I was up and moving.

I took a few flower pictures. You've seen all of these from me before. 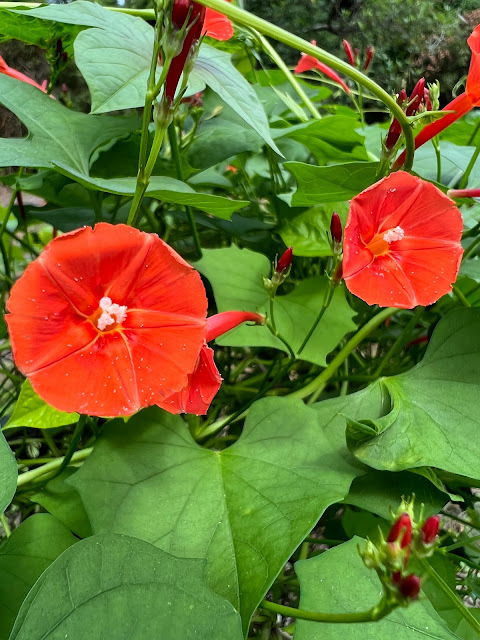 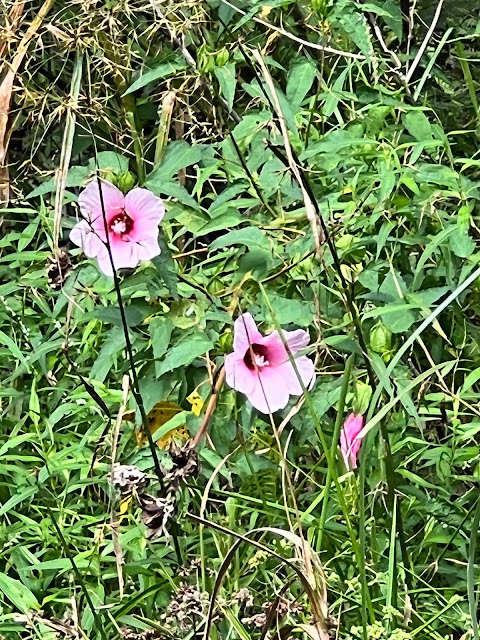 I've always heard these called swamp mallow but they are also called rose mallow. They, like the okra, are part of the hibiscus family.
And here's my favorite annual wildflower. 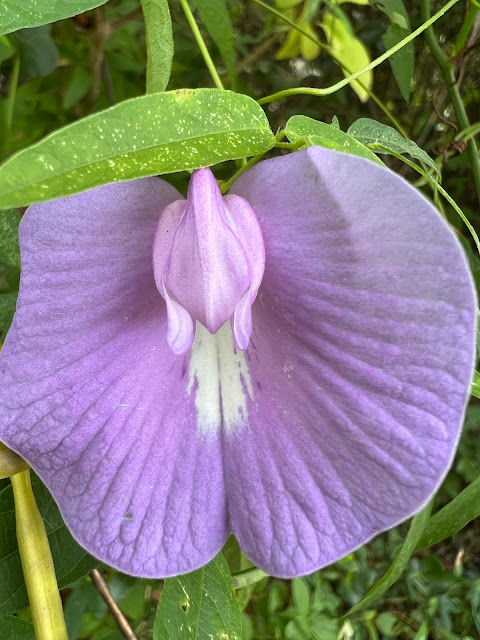 The clitoria! AKA butterfly pea.
Such a lovely lady plant, isn't it?
I've spent most of the rest of the day making a dress for the beautiful, perfect little human doll that Linda Sue sent for Maggie which I have not given her yet. I found some leftover mermaid fabric from a dress I'd made for Magnolia herself and sort-of using the garment she came in as a pattern, I made this. 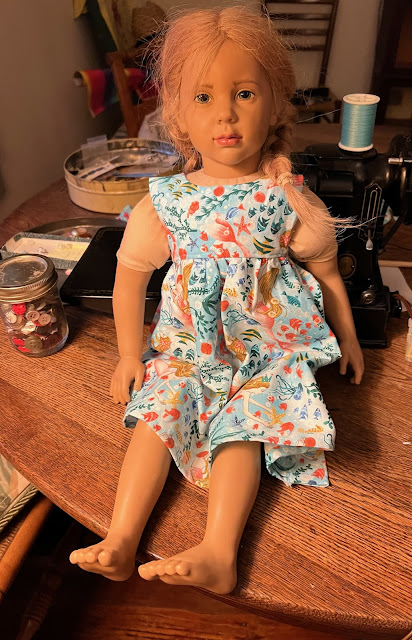 It is miles from perfect in any way and I still need to do the buttons and buttonholes but it's not so bad. It shows her cloth-body parts because I am NOT going to the effort of putting sleeves in a doll dress. Not at this point, anyway. I'm not sure the little human likes the dress at all. She appears to be a bit disturbed by it to me.
Oh well.
Here's some news! 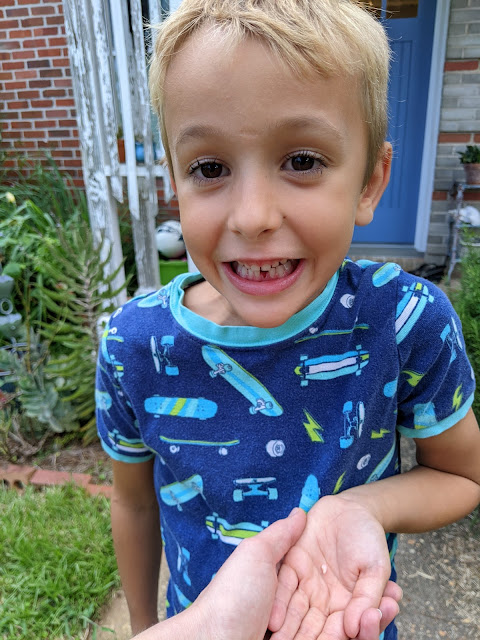 Would you look at those eyelashes?

August lost his first tooth! I hear he was very brave and let his daddy pull it for him. The tooth fairy left him a tiny Lego set which he loved and a note, and Levon, too, got a note from her that said "Just to say hi and keep taking good care of your teeth!"
He told his mama that the tooth fairy was "very kind."
In chicken news, one of the hens showed back up. The youngster hen. 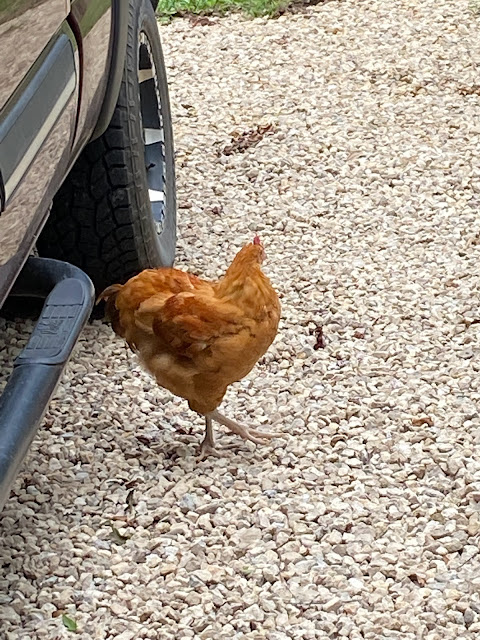 Funny how the three rooster kids got taken but the hen kid has so far avoided the fox. I hate to tell you this but Violet has not been seen for two days. I am heartbroken. I truly am.
Last night all of the chickens roosted on the front porch which they have never done before. Actually, this is a pretty smart move because I'm not sure the fox would get that close to the house and that porch is the part of the house furthest away from where the fox burrow is. If they go back into the coop and henhouse tonight, we're going to keep them caged up for a few days. I have no idea what good that will do but at least for those few days, they will be safe. I think the fox must prowl around the hen house at night and the chickens know he or she is there.
And that's all the news for today. On my walk I passed one of the local voting places and there were cars there. It's not our location and we had early-voted last week but I remember going there to vote for Jimmy Carter when I lived in Lloyd so many years ago. It's the old Woman's Club and now is used only for voting and as a regular AA meeting place.
Life in Lloyd. Where you can now purchase Steak-Umm's. Moving on up.
Love...Ms. Moon
Posted by Ms. Moon at 6:35 PM