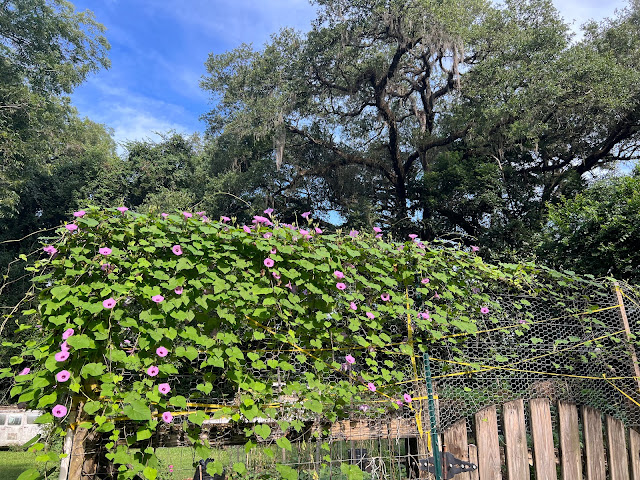 I've somehow let a rather invasive variety of morning glories get hold of one of the corners of the garden fence. Somehow I just don't feel the motivation to get rid of it although Mr. Moon glares at it every time he walks past it. Yes, he could do it but I'm the one who does most of the weeding while he does the heavy lifting of bags of mulch and tilling the garden when that's needed and also he likes to do the planting because as we have discussed, his rows are straight and true while mine are a bit more...wobbly.
Part of the problem is that it's rooted by a particularly thorny rose in an area where the fireweed grows so it's not going to be a pleasant task. And of course, it's pretty in its own way. Nothing fancy and the flowers all close by noon and I will get around to pulling it but it hasn't happened yet. 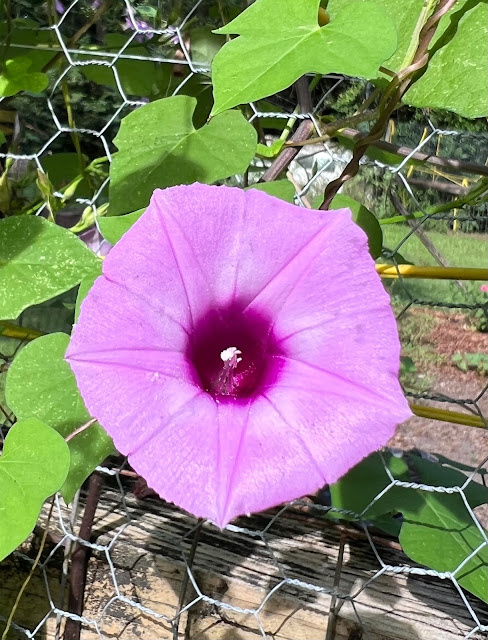 It's just so damn hot that any work I do in the garden needs to be only the most necessary of tasks. The idea of being near the heat-stroke point AND bleeding from thorns AND possibly getting into the fireweed sounds like a level of hell that I'd just as soon avoid if I can. So far now, I let it be.

Today was a go-to-town day. My grocery list filled both sides of an index card. So I texted Lily and Jessie to see if they needed to go to Costco and that ended up with us meeting at Chow Time for lunch at the buffet. I've probably been to Chow Time about five times now and I never cease to be amazed. The food is such a mixture of cuisines and the variety is huge. You can even take advantage of a hibachi grill, choosing raw ingredients that a hibachi chef stir-fries for you. There is sushi galore and it may not be sushi that Anthony Bourdain would have touched with a ten-foot chopstick but it's decent. There are salads and fruit, all of the regular "Chinese" food with your broccolis and green beans and sweet chicken dishes, egg rolls and spring rolls and at least four kinds of soup including miso. There's fried chicken, fried catfish, macaroni and cheese, pizza, fried okra, boiled shrimp, oysters, delicious baked salmon, and of course, french fries.
It goes on for days. Let us not even mention the various desserts. Customers range from families like us to business men, ladies who lunch, and lots and lots of construction workers who know a good deal when they see it.
So of course it's fun and the food is not bad at all and when we met up, all of the cousins were so very glad to see each other. It was a joyful reunion.
I took this picture of Levon and Owen while we were still at the table. August and Levon worship Owen. He is everything in the world they want to be which is mainly so grown up. And Owen could not possibly be sweeter to them. 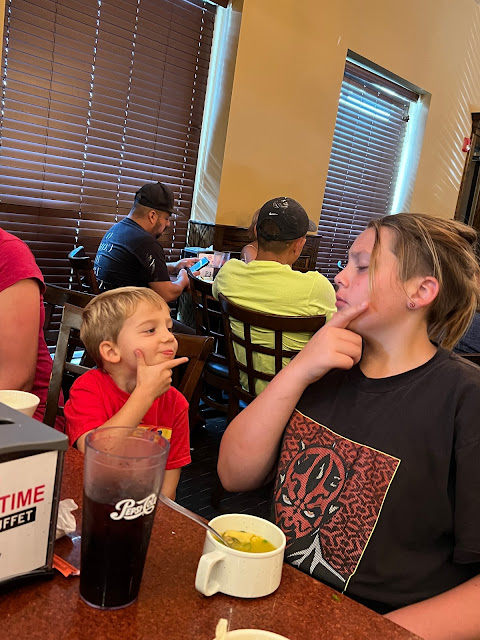 After lunch, when we were all full to bursting, I took this one outside. 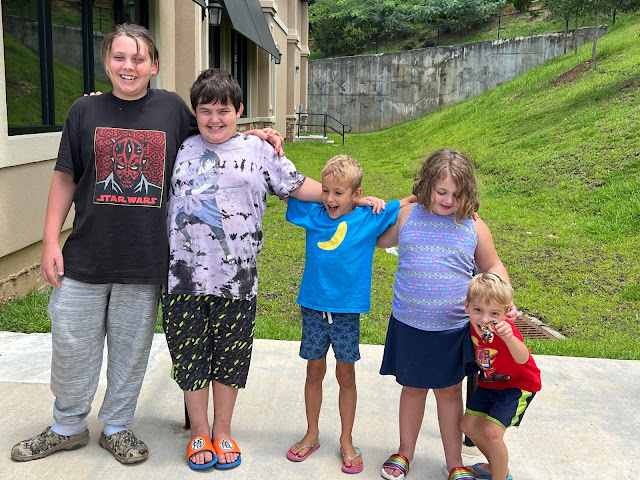 Owen arranged them all.
I did end up shopping at Costco with Jessie and my heart was happy in the coldy room as August was in my cart and we could shiver together once again. I also got to see Brenda and dammit! Why didn't I ask if I could take her picture? Her eyes were especially mermaidy today, and her lipstick was glittered. When we hugged I said, "You are so pretty!"
She is, too. And that girl ain't afraid of color which is one of my favorite traits in a human being.
And then I went on to Publix to get everything else on my list. Dear god. I was in town for weeks, months, years, eons.
Or so it seemed.
By the time I got home and had everything unloaded and put away, I felt as if I'd crossed the Sahara with a camel on my back.
Or something hyperbolic like that.
Y'all! I am so sad to report that the fox obviously got Annie. She is gone but her feathers litter the yard. And one of the teen chickens is no longer around either. I do not know what we're going to do about this problem.
But here's something far more cheerful- I saw Violet today, little, very old Violet, hanging about the door of the hen house and look what I found in a nest this afternoon. 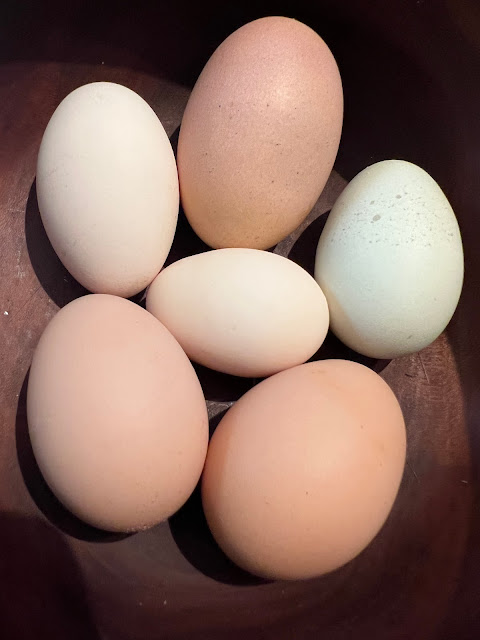 See that tiny egg in the center? I am almost certain it is hers. Not only is she old, but she also just came off of a long brooding period followed by the raising of a chick, and on top of those things, it is so very hot and it is molting season, and the hens are not laying the way they do in spring.
The force is strong in that one.
Speaking of the force. 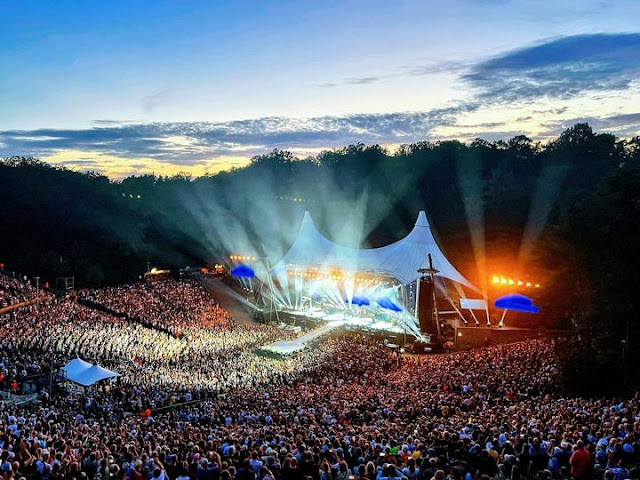 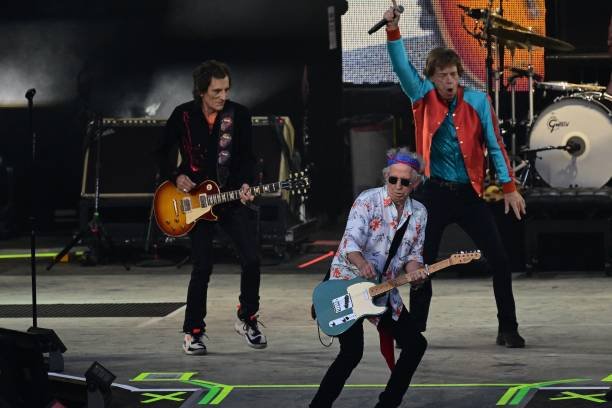 The Stones played their last concert of this summer's 60th anniversary tour in Berlin last night.
I can't help but wonder if truly that may have been their last tour and even possibly last concert.
Well, if they have showed us anything, it is that it is not wise to ever underestimate their spirit and desire to be out on the road again, to do what it is they do so well, together as musicians, as old mates, as the originators of something pretty damn amazing.
And it would appear that they're still filling seats. So...
Who knows?