I Hope This Doesn't End Up With Someone Needing Rabies Shots 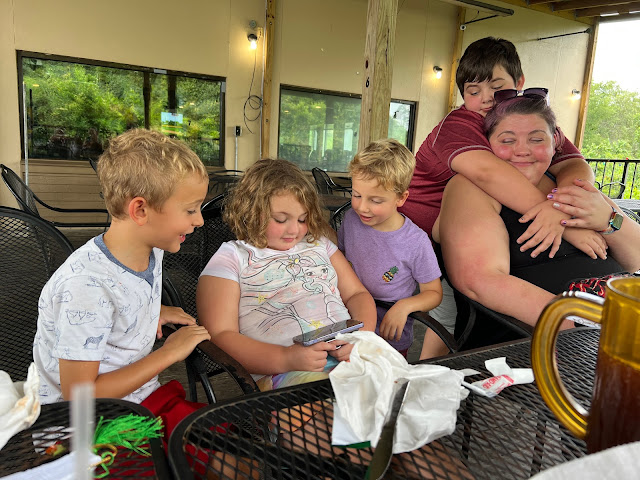 When it was my birthday a few weeks ago and the kids asked what I wanted to do for it, I suggested that after the Weatherfords got back perhaps we could all go out to lunch and today was the day we did that although Hank could not join us because he had to work. Same with Michael.

We met at our old stand-by, El Patron, and ate outside. It was hot, but not unbearable. Every now a little breeze would blow through and we'd all nod our heads and smile and say, "That's so nice." May had brought fans for Maggie, August, and Levon from the Dollar Store (not to be confused with the Dollar General) and they helped.
Lily didn't get off work until one so I picked up the OMG's from Jason He lives with his mother in a neighborhood right on my way to town but it has been years since I was there. It's a nice neighborhood and there are cul-de-sacs off of the streets and I went to the house that I thought was Other Grandma's but no, it turned out it was not. I was on the Long Knife cul-de-sac, not the Maize cul-de-sac and, well, no wonder they didn't open the door to me. I was informed over the intercom that I had the wrong house and I said, "Oh! I am so sorry! Please forgive me!" and went down another street and there it was, a very different looking house but houses for me are much like cars and faces- if there is not something very distinctive about them, I don't really recall their details. I felt like an idiot but not really.
The kids tumbled out of the house and got in my car and away we drove to the restaurant. I asked them about their new classes and teachers and they all seem quite pleased with who they'd gotten and met at last Friday's school orientations.

Mr. Moon met us for lunch too, and Vergil came as well so it was quite a crowd. Rachel was able to join us on her lunch hour but ended up having to take her food with her as things were a bit slow. It was so good to see everyone. The kids were good and patient although Maggie got her feelings hurt and then her head, too, when she raised it up under the table and she spent some time sitting separately, collecting herself. She is so much like her mother was. But as you can see in the picture, by the end of the meal she was happy again.

I took the two large bags of clothes I'd culled with me, and May collected them to go through them. I hope she wants some of the things because some of them are really nice. After she goes through them, she is going to pass them on to Jessie. As we stood in the parking lot, giving our kisses and hugs good-bye, thunder and lightening began to crack in a serious way and we all scuttled off.

I had thought to go to Publix but nothing on my list was of dire importance so I just stopped at the pharmacy where I needed to pick up a prescription and then dropped off library books and came home.

When Mr. Moon got home, a truck followed him into the driveway and it ended up being an old friend who had been in the Tractor Supply place at the same time as he was and offered to bring the very large trap that he bought home for him because Mr. Moon was in a car, not the truck.
The trap is for the fox. But big enough for a coyote because we have those too.
This sounds like a dangerous proposition to me and I can only imagine all of the animals we are likely to trap before either a fox or a coyote fall for the bait. On the trail cam we were seeing the fox, possums, raccoons, and stray cats. But something has to be done. We are losing chickens at a frightening rate and I am even considering just giving up the whole chicken business although I would hate to do that.

I am going to cook some grouper tonight along with some okra and tomatoes. The okra is from our garden. One by one, I have picked enough pods for supper and I will cook them with love, the tomatoes, and some onions.

And that's the news today.