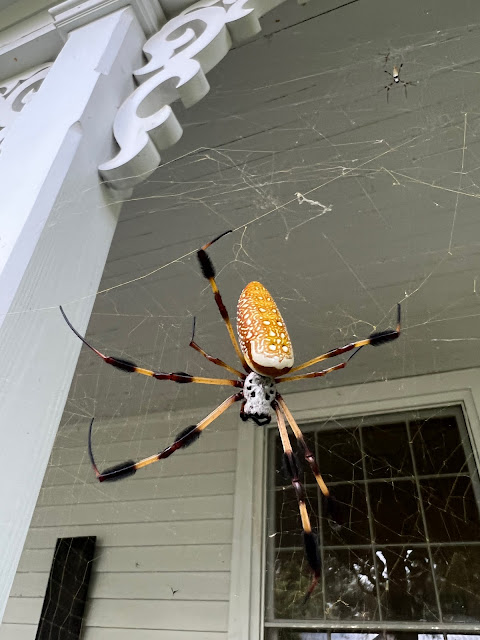 This week's photo of Spider Woman, taken from a different angle.

Phew! I did something today that gave me a bit of a sense of a reprieve from an anxious situation coming up. My annual meeting with the brilliant and personable Dr. Zorn was scheduled for August 23, which is next Tuesday. I have been quietly freaking out about this since July 1. I got my text reminder yesterday and it said that I had been scheduled to see his ARNP instead of him and it upset me. It's not that I don't trust ARNP's. I do. In fact I think that in many cases, you're better off seeing one of them than a physician.
BUT, in this case, for an annual exam, I want to see my doctor. The man I've come to trust for many reasons, the one I feel most comfortable with. I NEVER go see him for any reason besides this yearly thing because honestly, I just don't get very sick. I mean, when I broke my ribs, I went and got an x-ray but that didn't involve going to his office and when I got appendicitis, it was on a Saturday and the office was closed and I went to an ER and needed immediate surgery so again, he wasn't really involved.
Initially, I just sent the reply "confirm" to the reminder text because well, hell, let's just get it over with, right? But it nagged at me and I talked to Jessie about it and she agreed with me and said that I should call the office and reschedule when I can see him.
And so I did.
Honestly, they have the most wonderful, nicest lady who handles appointments. She's just so warm and understanding and she gave me an appointment with him AND IT'S NOT UNTIL THE END OF NEXT MONTH and you know- a comet could hit the earth before then, eliminating not only the need for that appointment but for every fiddly, diddly human problem on earth.
I try to be optimistic about these things.

Mr. Moon and I went to Monticello today to early vote. It was a little like a date. We held hands on the way in. That's a date, right?

I took another hideous walk this morning. I really should get out earlier than I do but I'm not sure it would make that much difference. The temperature would be a few degrees lower but the fucking humidity would be the same and it would still be horrible. But it does fulfill my need to suffer daily as I have so often said, and my soul always feels a little lighter after I'm done. These are not long walks, y'all. Two, two and a half miles at a decent pace. I walk as fast as I can to get it over with.

All right. Let's talk about chickens. As of this morning, we had six hens, Liberace, and one young one. I think the young one is a hen. We still have Dottie and we still have tiny Violet. She was on the nest again today. We have the grey chicken Gracie and a few others. Last night we got another teen-aged possum in the trap. There is a place in the trap where you can put a live chicken as bait and the fox will not be able to get it once it, too, is in the trap. We may end up having to do that but I really do not want to. As you can imagine, it would be horribly traumatic for the chicken, not only to be in a trap with a fox, but also being caught. But we have certainly been enjoying the motion-sensor camera recordings we're getting. I knew there was a lot of wildlife around here, I just did not realize how much. I do not know what we're going to do. One would think that keeping the chickens shut up at night would be enough but the fox seems to also hunt during the day.
Needs must, I suppose.

And so it goes. I took the trash, I watered the porch plants. I picked and shelled peas and they are cooking now.

I commented last week on a post of John Gray's that his staircase in Wales looks a great deal like my staircase in Lloyd, Florida. He asked for a picture of mine and so here we are. 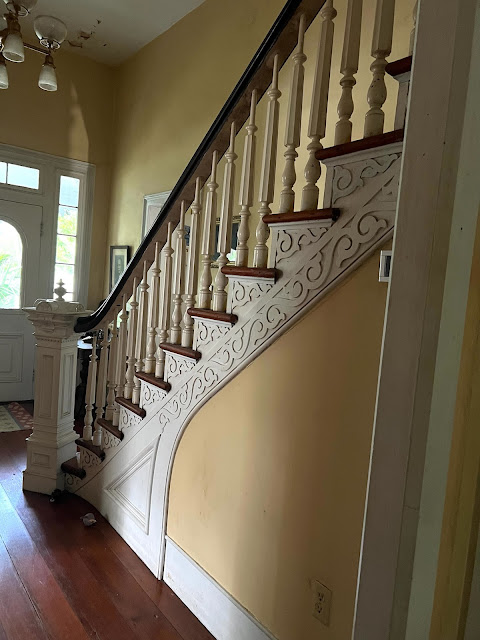 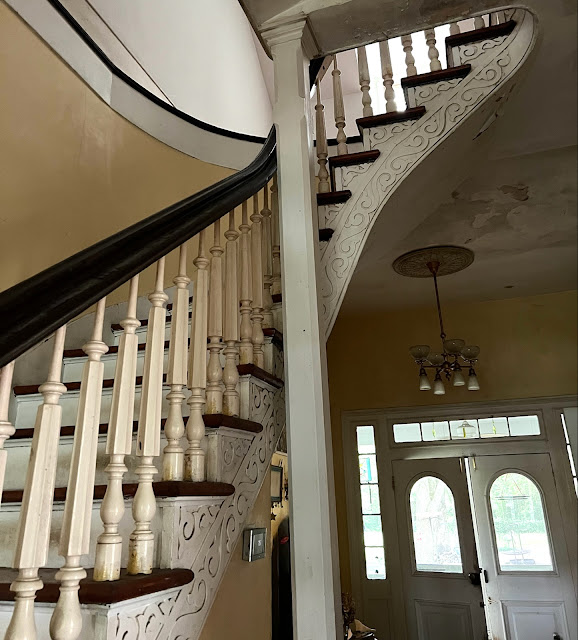 As I said in my comment to him, they are not twins but very close cousins which is rather odd as we live so far apart. I am sure that there has been fanciness added to my staircase after it was originally built. Although my house is over 160 years old, his is much older, I am sure.
Still, it is nice to think that we bloggers can share so very much whether experiences or hopes or dreams or staircases.
Love...Ms. Moon