A Death In The Neighborhood 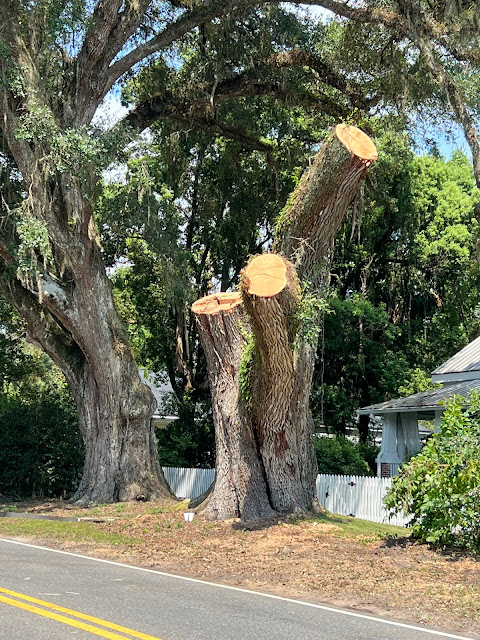 I saw yesterday that one of my neighbors had a tree crew over at her place and I assumed they were cutting limbs again. That oak, that majestic, ancient live oak, has been bad recently about dropping limbs on the power line which cuts out everyone's service and also, dropping limbs on the road. I don't know if any cars have actually been hit but the possibility is not to be ignored. When I took my walk this morning, a few workers were back and everything had been cleaned up and the tree looked like that.
The former tree, I suppose I should say.
I asked one of the guys if they were going to take out the trunk, too, but he said that they didn't have anything adequate to do that sort of cutting and removal. That's how immense that tree is.
I also asked him if the tree had been dying. He hemmed and hawed a little and said that it was becoming a danger due to its age and told me what I already knew about the limbs.
And then I said what I said at the beginning of this post.
"Well, shit."

I have not talked to my neighbor who lives there about the removal and I seriously doubt she took the decision to have the tree removed lightly. For one thing- a job like that costs more than you can imagine. Not only that, she grew up in Lloyd. Part of her childhood was spent in the house I live in. Her mother and father were also raised here. I have no doubt that she loves the trees and honors them as much as anyone could. I feel certain that her heart hurts, as does mine.

In more cheerful news, the beauty berry is ripening. 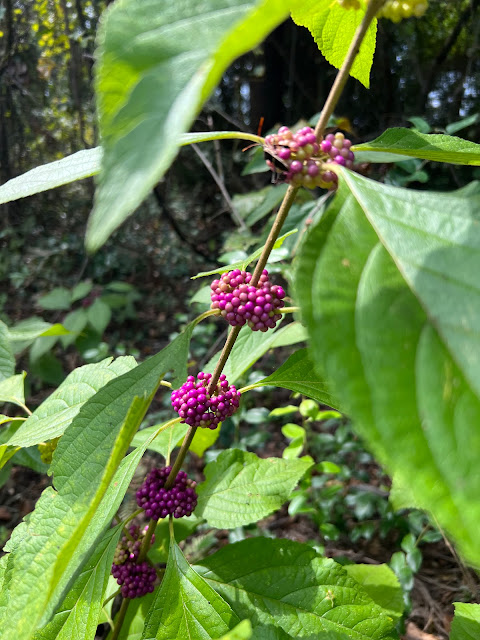 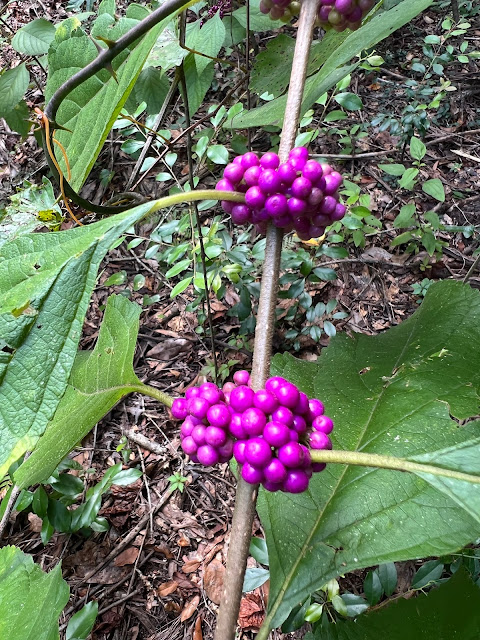 I am so glad that I made all that beauty berry jelly a few years ago because now I no longer have to look at these gorgeous fuchsia berries and wonder what a jam of them would taste like. I knew it was possible to make it- I'd read articles. So I made a bunch of it two or three years ago? And the color is amazing. And it's sweet because of all the sugar you have to use in it and the flavor that the berries give it is...well, subtle, to say the least. It's pretty on a biscuit but not very interesting. I keep thinking that a real chef could create some sort of roasted venison dish with it and port and wild onions or something but I haven't attempted that. Not sure I'd know where to start.
So now I know what beauty berry jam tastes like and I feel no urge to make it again. In fact, I have at least half a dozen jars of it that I just need to dump. They're taking up space and not getting any better with age.
Bottom line- I can now enjoy the beauty berries for their shiny color alone and let the birds eat all they want.
We are eating from the earth, the sea, and the garden tonight. I am making a gumbo that has in it, among all the other gumbo things, venison sausage, left-over snapper and mullet, and okra from the garden. I went out to pick okra after a downpour we had this afternoon and took a few pictures. 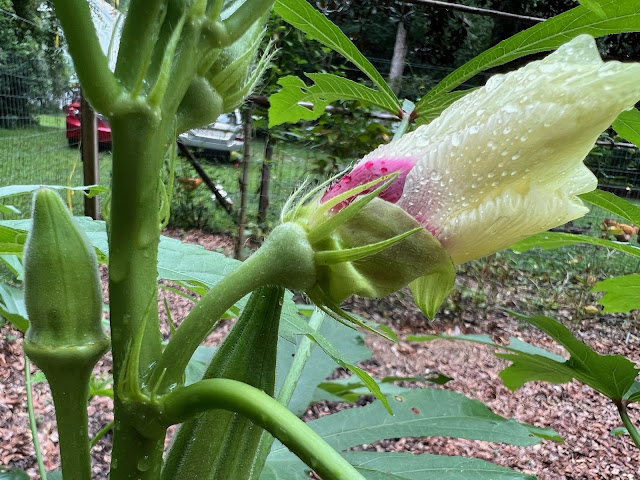 I like this one. It shows the closed blossom with raindrops still on it, a mature pod, and one of the darling green baby penis pods.
Sort of. You can see what I mean.
It's a rather phallic vegetable, all in all. Or is that just me? I do love the contrast of the feminine blossom with the green spear of the pod that grows so very quickly from nubbin to mature and sturdy vegetable.
The best thing that happened today is that I got to talk to my oldest still-friend in the world. My best friend from about the sixth grade. Lord, we went through a lot together and it is such a joy and a comfort to still have each other to talk to about the things that affect us now. It is her birthday and so I called her and we spoke of grown children and grandchildren, husbands, baked goods, and high school reunions. It is our fiftieth this year and neither of us is going but we reminisced and talked about the very few people we would be interested in seeing. I feel so grateful to have her in my life after all of this time. She is someone who knows me to the bone and back. And on top of all of that, she is a marvelous person. I love her dearly.
As you can tell, life is moving on as usual here in Lloyd in August. I am tired this evening. My walk took it out of me. The fox continues to pick off our chickens. The bread is out of the oven and looks incredibly weird but it will be good with the gumbo.
Here's a picture of Maurice I took in bed last night. 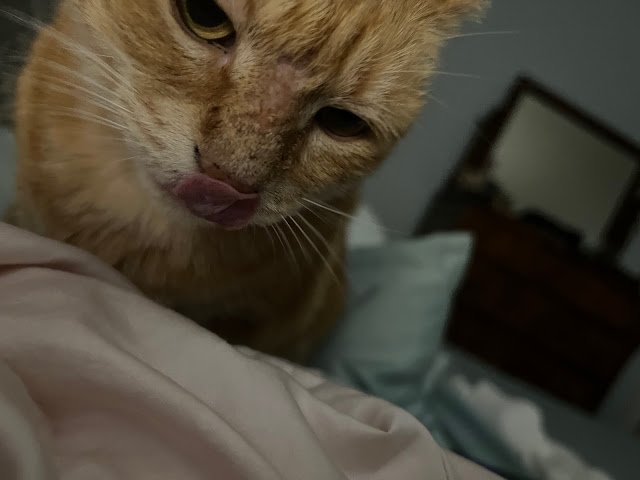 She finally got up the courage to get there before Jack, but left before we fell asleep and he came in and replaced her.
She wants love just as we all do. She is so scared of asking for it and even more terrified of accepting it when it is offered.
I understand.
Love...Ms. Moon