Peace On A Saturday 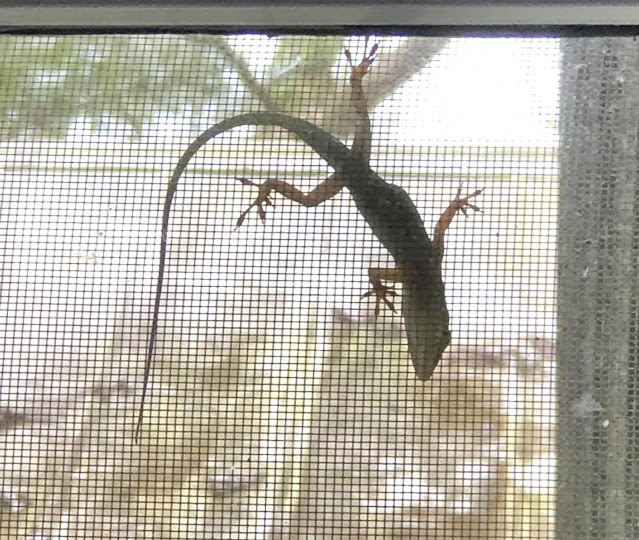 I see that Blogger is allowing me to post pictures again. That picture was from yesterday. Little guy on the screen, being still and waiting for unwary insects to come his way. I've lived around these anoles my entire life and I've never gotten tired of seeing them. They're like small visitors from another realm who are here to observe our ways and eat our bugs. They are quite beautiful.

I haven't taken any pictures at all today. It's rained without ceasing, sometimes coming down so hard that we couldn't see fifty feet into the yard, sometimes just a steady drumbeat of good, solid drops. Mr. Moon is worried to death about his garage which has some egregious leaks in the roof. He's called three roofers and not one has returned his call. He's frustrated.

I had to go to town to pick up a prescription and while I was at it, I decided to take May and Michael and Hank and Rachel their Christmas gifts and some eggs. It wasn't raining too hard when I left here but by the time I'd gotten five miles down the road it was pouring and the roads were well on their way to flooding and I decided to just get to Publix where my medication was, grab it, and get home. I informed the interested parties of this decision but when I got out of Publix the rain had slowed down considerably and I managed to get the goods delivered and I am vastly relieved. That has been weighing on my mind heavily since before Christmas.

Last night's peas and greens were terrific and the cornbread seemed especially tasty too. The greens may have been the best I've ever made and I attribute that to adding a can of stewed tomatoes which of course have sugar in them and somehow the sweetness and the green-ness and the onions and the vinegar and the bacon all came together in perfect harmony. Just so good. We watched the seventh episode of Bridgerton and we are now firmly invested and of course there are only eight episodes so that's going to be sad.
"But, but, but..." We all sputter when this happens, don't we? Will there be a Season two? We shall see. Of course by the time that happens I will have forgotten who everyone is and what their standings in the families and world in general are.
So it goes.

And the rest of the day has been cuddly and sweet and the air is cool and I am going to make risotto with spinach and sun dried tomatoes and lots of onions. And to top it all off, the Jefferson County health department called and we are to be at the facility at nine a.m. on Thursday morning for our first dose of the vaccine.
I am very happy about this, of course, but my happiness will not be nearly complete until the rest of my family can get it. Hell- until the whole world can get it! I have to tell you that this is probably the first time in my life that I have felt that I have undeserved privilege for being OLD! Let's just add it to the list of all the other ways I have benefited from my privileges. Somehow being old doesn't feel quite as undeserved as the rest, though, to be honest, it's not like I've done that much to stay alive except not to die.
So far. And now at least I probably won't die from Covid.

All right. The rain is still coming down. Bless it as it soaks through the earth and filters down into the aquifer which feeds our beautiful springs and rivers and lakes and wells which sustain us in all ways.

May you never thirst.