In Which I Relate Absolutely Nothing Of Interest To Anyone 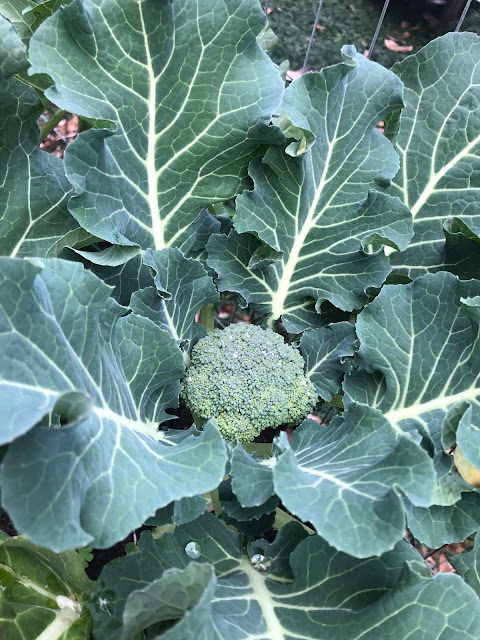 Lily sent us a picture of her broccoli which is starting to head and I wondered how ours is doing because I haven't actually looked lately. It's off to the side in the garden in pots, and I was surprised to see this happening.
Well dang!
Nice surprise.

It got pretty busy here this morning for awhile. Mr. Moon got a call from the place where he was getting his almost two-hundred pound wild pig processed, telling him that it was all ready. He and Vergil did the small one but they let the pros handle that big pig. This meant that he needed to unbox and set up the outdoor freezer he'd bought and he had to go get the meat and he also had a duck-hunt planned so suddenly everything was moving and shaking and I made him some breakfast sandwiches and then Vergil and the boys came over to pick up Boppy to go get the pig which they did.
Things calmed down and I did a crossword or something.
Guys- I think I'm losing about ten percent of my vocabulary a week. At this rate I'll be in the memory care unit by Christmas. I'm not joking about this. It's getting weird. Still, I struggle on with the various crosswords, being frustrated and and somewhat horrified. It's not that much fun but it has become an obsession anyway.

Then the guys got back and while the men split up the meat and then Mr. Moon got ready to go hunt, I fed the boys some peanut butter and raisin and honey sandwiches. Recently, August got curious about the little dorm-sized refrigerator in my kitchen where I keep grains and beans and things like that. He wanted to know what was in it and I showed him and he noticed a box of golden raisins.
"What are those?" he asked and I told him. He asked if he could try them and I said, "Of course," and he did and he liked them. So when I was making up the sandwich concoction, he asked if I could use golden raisins too and I said I could and I did. I was not surprised that he remembered. Kids remember everything and don't even try to convince yourself otherwise because they do.
After they ate their sandwiches and generously offered me the crusts (I told them that they would know they were growing up when they started eating their crusts) we read some books. We read "The Five Hundred Hats of Bartholomew Cubbins" which is really an odd story in some ways but I do like it very much. You can tell it was written a long time ago because there's an executioner in it who is prepared to cut off Bartholomew's head with his axe and that would not pass the editor in today's world, not to mention the fact that a spanking is involved. But August adores the story and asks many questions about what certain words or phrases mean and why things happen and so forth. He's a curious little man. Reading it is a joy because there are so many voices and emotions which makes me happy. Sometimes when I get too dramatic, Levon puts his hand over my mouth.
You cannot please everyone. He wanted a book called "The Train to Timbuktu" by Margaret Wise who wrote "Goodnight Moon" and I have to say that she should have stopped with "Goodnight Moon" although she may have written the other one first. But, we got those trains to Timbuktu, the big one and the little one, clackity, clack, clackity clack, and clickity click, clickity click.
By then Vergil was ready to go and so off they went after I gave the boys their going-away treaties of six M&M's apiece and when I got back in the house I realized that I could not find my phone. I called it from the landline (which is about the best use of a landline these days) but I couldn't hear it ringing. I distinctly remembered taking it out of my pocket but I could not remember WHERE.
Could it have gone home with Vergil and the boys?
I called him, again from the landline, and yes, I think I had set it down on the seat by August when I was digging in my pocket for the M&M's. Poor Vergil had gotten almost all they way to the Tallahassee exit on I-10 and he turned around when he got off and got back on, heading east and brought it to me.
I felt so stupid and although he was incredibly nice about it, I know he had things to do and it was completely ridiculous for him to have to make that drive twice.

And that was about all I did today. It was spitting rain on and off, gray and dreary, damp and chilly. Not cold at all, but just that sort of wet chill that gets into your bones and I didn't feel like doing anything outside anyway. I have so much that needs doing out there and plenty that needs doing in here but I have absolutely lost my motivation.
I don't know. I keep wondering if I'm depressed. I mean- sure- Biden's the president now and that's a huge relief but we're still stuck in this horrible pandemic which is affecting the entire world. I've been reading an article in the New Yorker about how horribly the pandemic was mishandled by Trump entitled "The Plague Year" and it's by Lawrence Wright. It's long as fucking hell but if you want to read it (and I consider it to be worthwhile but that means nothing) you can find it here.

Trump's blundering, his ignorance and disdain and disregard of scientists and doctors, not to mention using the whole thing for what he considered his political advantage, has caused the deaths of literally hundreds of thousands of people. The man should be tried on charges related to that if nothing else. We all knew about these things but to read the timeline and details is horrifying.

I suppose I should quit dwelling and ruminating and I know I should try to make myself do things that get me out of the house, even if it's only as far as the garden. And yes, be more regular with my walks.

Okay. Here's something I don't think I've ever seen. 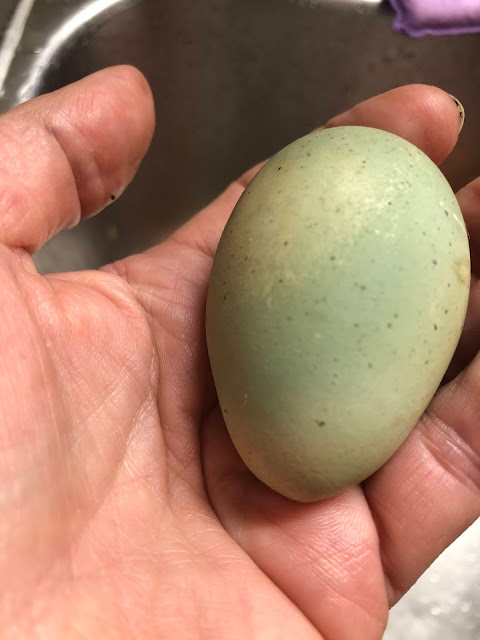 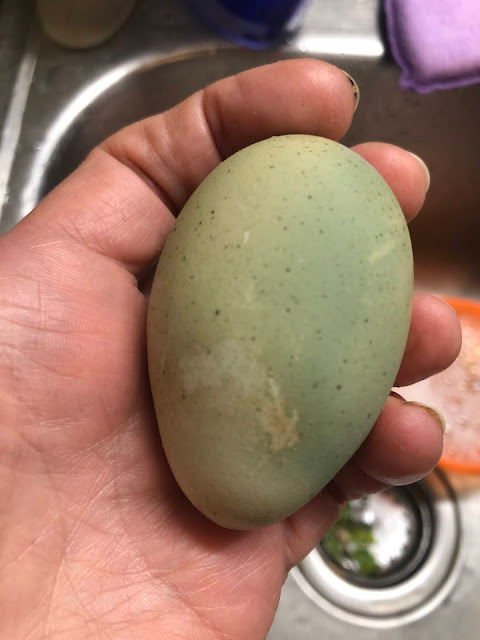 An egg which has sort of a mottled color. And it's a bit pointy. Not sure what's happening there but I'll be interested to see if I get more like that.
Lord, my life is small.
Love...Ms. Moon