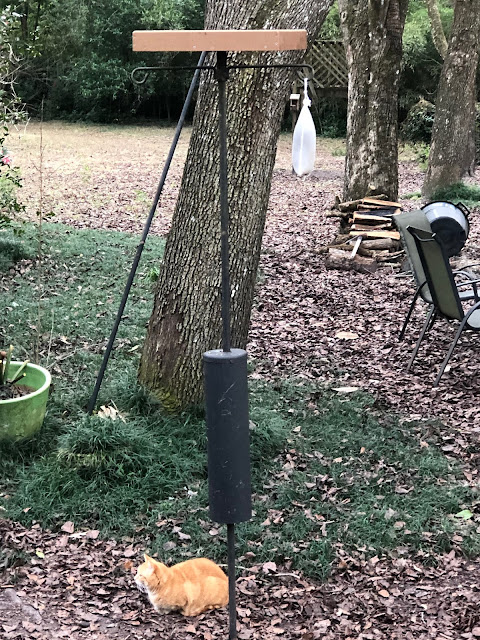 Really Maurice? Do you think that stalking birds at the feeder is a good idea?

Okay. So now I'm watching her as she is staring at a male cardinal on the feeder. Since that tray is about seven feet in the air, I don't think Maurice can leap up and snatch the bird. Hope may spring eternal but cats can't spring that high. I'm glad the cat is outside getting some fresh air and possible exercise. She was on our bed from around ten o'clock last night to early afternoon when I shooed her off the bed so that I could finally make it. She's taken to settling in on Mr. Moon's pillows to claim the bed as hers before Jack gets on it. She sleeps on the pillows until she Mr. Moon comes to bed and then she moves down to sleep next to or on me where she growls and snarls every time I try to move. 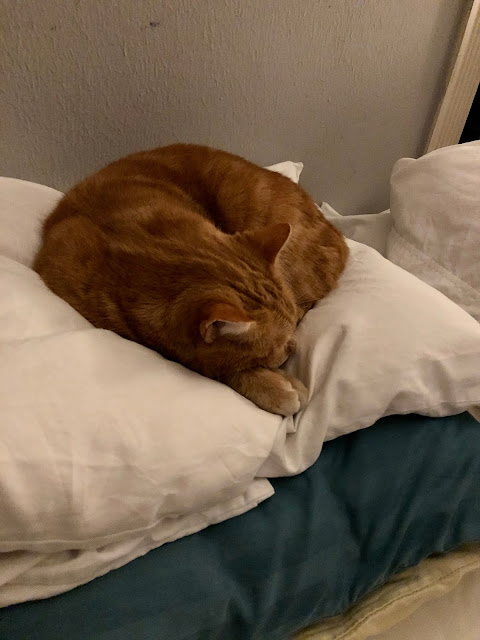 This is about as peaceful and cuddly as you might imagine. I do try to cut her some slack, thinking of how she was probably raised by a feral mother in a van down by the river (or, to be more accurate, possibly at the dump) and I do love her but the constant threat of attack and injury is somewhat daunting. But just as with all cats, what her humans think about her and her ways is simply not her concern.
Boy, did I have an exciting day! First off, I washed my bathroom rugs because last night after my shower, wanting to be a good wife, I started my husband a bath. I turned on the water and poured some epsom salts in and suddenly realized that there was water everywhere. I didn't have my glasses on and because I'm quite blind without them, didn't notice that the shower attachment part of the tub plumbing arrangement was on partway. At this point, most of the rugs and the front of my nightgown were wet.
I hauled all of the rugs to the washer and mopped up the water as best I could with towels and changed my nightgown and then proceeded into the Glen Den where I gave Mr. Moon a small lecture on not leaving the shower attachment on when he leaves the bath and he apologized profusely and asked me to please just let him start his baths.
I most certainly will.
So today I washed all the rugs and also the towels that I'd used for mopping purposes and I did the crossword and swept some rooms and cleaned all the toilets and then I cleaned the hen house.
None of this was nearly as strenuous as it sounds. The most difficult thing I did all day was to distribute three bags of leaf mulch in the garden and that was only hard because the bags were very heavy from rain getting in to saturate the leaves and the bags were old and they tore.
It isn't easy being me.
I also weeded a little which in my case involves kneeling and pulling and scooting about via knee-walking.
So I feel lazy. Hell, the man's even going to grill us some chicken for supper.
But I am going to make the cauliflower. I am afraid to ask him if he's tired of it yet because if he says that he is, I'll feel bad when I keep making it and serving it because I am not going to stop making it. I may tire of it eventually but not yet.
Since this is quite possibly the world's most boring blog post, I will try to make sure that you get your money's worth by sharing the recipe for the cauliflower. Again, I hope the New York Times does not sue me. Perhaps the fact that I have recommended their app (which does cost money) about fifty times will save me. 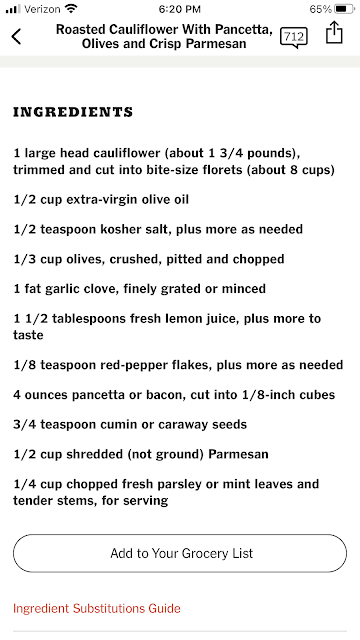 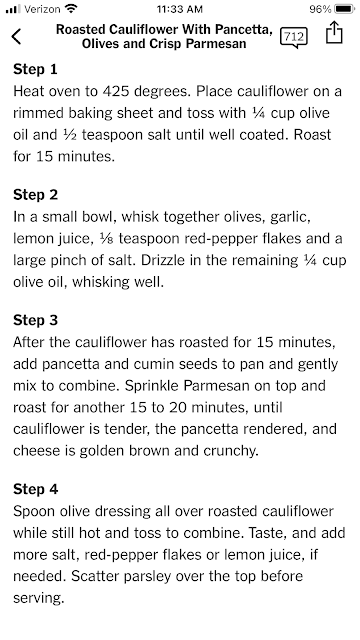 The changes that I make are that I use one strip of bacon rather than pancetta because I don't buy pancetta. It could probably be left out entirely. I don't add the cumin seed. I did once and it did nothing for me at all and I do love cumin. And I never serve it with the parsley or mint because again, I don't keep those. However, do with it what you will. As to the type of olive I use- just regular green ones although sometimes I do a mix of those and Kalamata.
Happy cooking, y'all!
Love...Ms. Moon
Posted by Ms. Moon at 6:30 PM