Are We Tired Of Winning Yet?

Incitement of Insurrection.
And that is the charge that got Donald John Trump impeached for a second time.

It's amazing how quickly congress can act when its members were in dire peril of being murdered by a mob. I have a lot of thoughts about that. First off, I am really glad that they got the job done in such short order. I'm also glad that ten Republicans reached in their pants and found their balls (metaphorically, at least- they weren't all men) and joined with Democrats to approve the measure. But what I heard from a whole lot of other Republicans during the day only made me despair more as they talked not about the violence of last week, but about the BLM protests and "antifa" protests which also led to violence in some cases and about how it's time for the nation to heal which according to them can't happen if the president is impeached.

Look- I'm not a doctor but I know damn well that if someone has a raging infection, there generally has to be surgery to remove the source, the pus, the nastiness before any bandages can be slapped on.
And Donald John Trump is the source, the pus, and the nastiness.
Slice. It. Out.
Nancy Pelosi held the scalpel today with a sure hand as she made the first incision and I love that woman.

Why was it possible for them to so quickly get that job done when we still don't have stricter gun laws? You would think that after oh, let's say ONE school shooting that they could have been enraged enough to do something about that.
Well, I guess that's not really helpful in today's conversation but it is a thought I'm having.

I went to town again today which was as scary as ever. Another result of having DJT as president is the fact that the pandemic is raging with higher numbers than ever of both cases and deaths. This is certainly not the time to become complacent and I am not. I rolled through Costco, got my tomatoes and cucumbers, pine nuts, and supplements and then I went to Publix where I got everything else. Oh! I bought $21.99 worth of toilet paper at Costco because they had the stuff all piled up in an aisle and let me just say that that's a lot of toilet paper. I've not once, since this whole thing started, hoarded toilet paper nor could I see the need to but I am just thrilled to know that I won't have to buy toilet paper again until possibly some time this summer. Charmin extra soft wide rolls.
Hell yes.
I don't know how it is where you live, but around here, we all have "our" Publix. We get to know those stores like the back of our hands. And I generally go to the same one myself- my Publix- which is the closest to Lloyd but sometimes, just for the hell and excitement of it, I go to a different one which is right down the road from Costco. I did that today because I was looking for oat bran which my Publix hasn't had lately and I did find it which made me happy and I also found this. 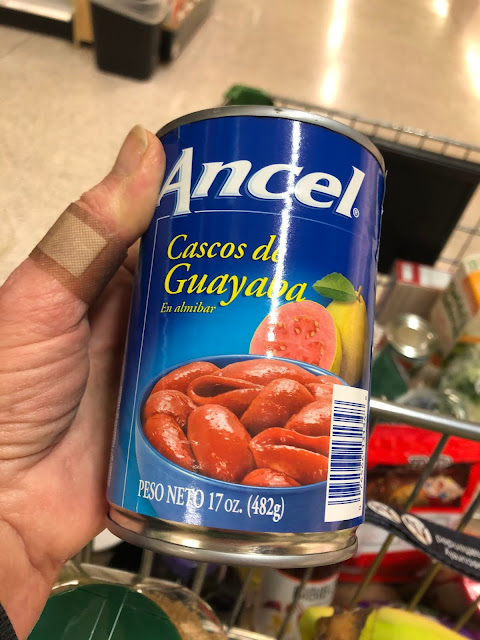 Guava shells! I have been craving something that Granny Matthews used to make which was a guava shell pie. As I recall (and I was a child) she simply made a pie crust, lined it with the guava shells and poured the syrup from the can over them, and baked the whole thing. She served it with a little bit of cream cheese on each piece. So I am going to try making one.
I guess that overall, it's been a good day. I mean- hell- Trump was impeached for a second time, I got the shopping done and found guava shells and I took the trash and found something else to bring home. Not anything as cool as cake plates or tiny Fiesta Ware pitchers but still, something practical and useful. 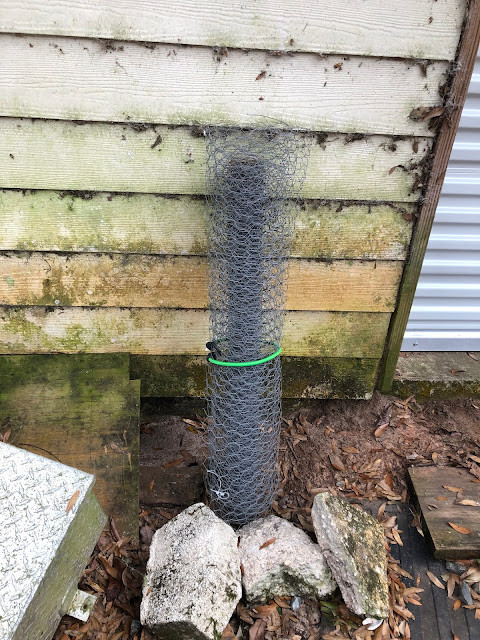 Chicken wire, thoughtfully wrapped and corded.
Oh, the joys of country living.
And because I think they're funny, here are two other pictures I took today. 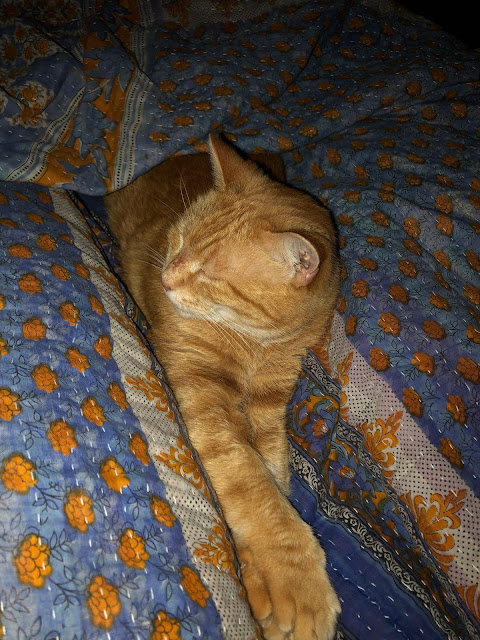 When I got up this morning, Maurice was on my feet and I carefully moved them out from under her and then covered her up so that she would be comfy and there she stayed for quite awhile. I wanted to make the bed but I just could not disturb her. She was still lying there when I went to take a shower but when I was done and walked back through the bedroom, this is what I saw. 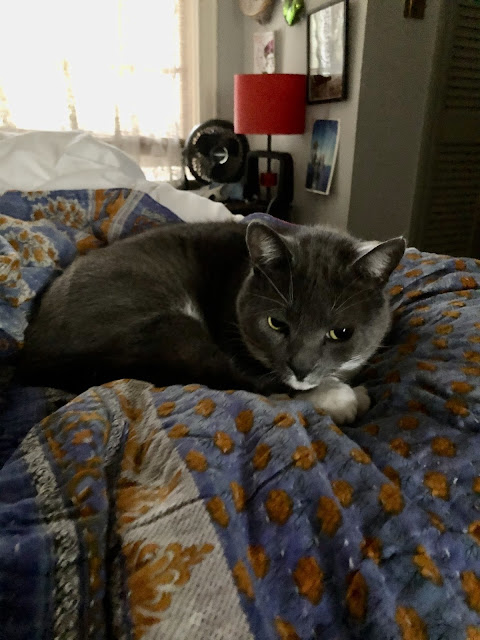 Is he scary looking or what?
For some reason, I didn't have as much sympathy for Jack so I gently lifted him off the bed and made it and he's been back on it all day long.
It's still gray here. It's cold. We haven't seen the sun in four thousand, nine hundred and thirty-eight days.
I trust though that we will soon.
Love...Ms. Moon