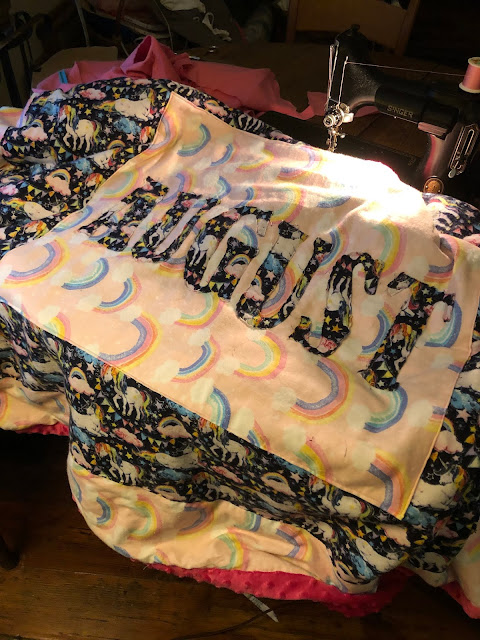 I reverted to my slothful ways today and hung about inside the house and worked on August's blanket and listened to a book and it was most pleasant. The day has been warmish but so very, very gloomy. No sight of the sun at all, not even a quick peek between clouds, just a blanket of dark gray as if the sky was one great bruise. It's just started raining, a slow drizzle of heavy drops. According to my weather widget we're going to be getting rain on and off for the next day or so and then of course it will get chillier again.

I like August's blanket. It's quite different from the other name blankets I've made. Well, the basic design (if that word can even be used for a few rectangles) is the same but August's love of pink and of rainbows and of unicorns inspired an interesting combination of flannels. The unicorn print was leftover from a nightgown that I made Magnolia two Christmases ago and I ordered the rainbow flannel from online last November. The backing is that way-too-soft-to-be-natural fabric that is sort of weird but it's just so very, very cozy and so I used it. Now I'll do embroidering around the letters, probably just some blanket stitches and then see where that leads. I love that part of the project, the choosing of colors and stitches, the hand work that is slow but so enjoyable.

Speaking of Magnolia, Lily sent this picture to the group today. 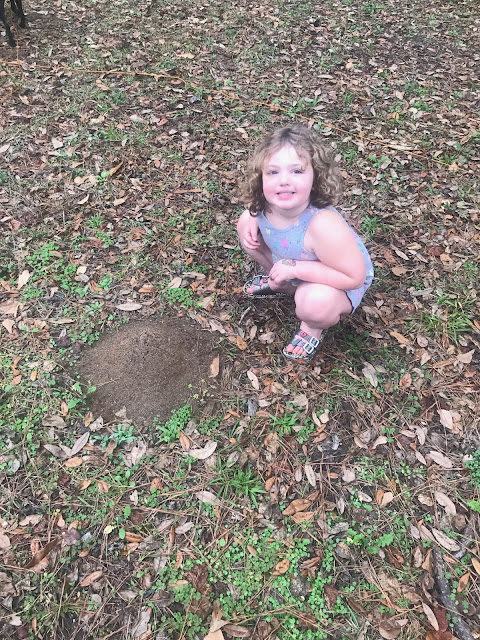 There's Maggie herself, observing her ant friends. That's what she calls them- her ant friends. Bear in mind that if they took a mind to, they could swarm that little girl and sting her to pieces. They're not called "fire ants" for nothing. Lily reported that she said, "I'm going to name this one Jimmy. Actually, I'm going to name them all Jimmy."
As Hank responded, "That seems efficient."
It's funny- I know that if Magnolia were in school, she would love it. She would love the social part of it so much, making friends and playing but I can't really feel too sorry that she's spending this time at home with her mother and her brothers and at her dad's, playing outside in the yard, observing the bugs and the animals, making up pretend games with her dolls and toys. Those things too are important. I noticed a long time ago that a strangely large percentage of very creative people had periods of their childhood where, because of illness or injury, they spent vast amounts of time in bed with nothing to entertain them but books and drawing and their imaginations. Not that I would wish that on any child and not that I would wish this pandemic and the isolation it's enforced on any of us, particularly children, but if there is a positive side, it may be that learning to be entertained by nature and the small things is not a bad thing at all.
Another picture that Lily sent was of a huge feather that Maggie found and gave to her because she knows her mama collects feathers. 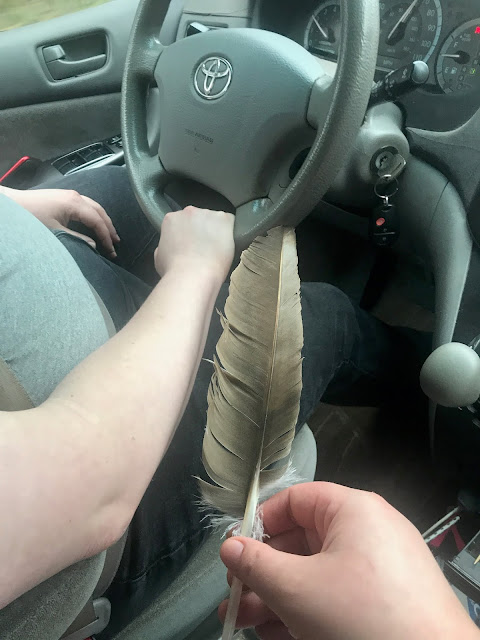 She's a sweet girl, that one. She's a love. When she's not demanding to spend the night in the chicken house. And even that is pretty charming.
I've been feeling quite lucky today in so many regards. It's always a mystery to me why some days are such existentially angsty slogs and some days, when absolutely nothing has changed, I can feel such deep gratitude and contentment. Even what I would call a quiet and simple joy.
I suppose it's best not to over-ponder but to simply appreciate those days when they come and enjoy them without reservation.
Love...Ms. Moon
Posted by Ms. Moon at 6:05 PM