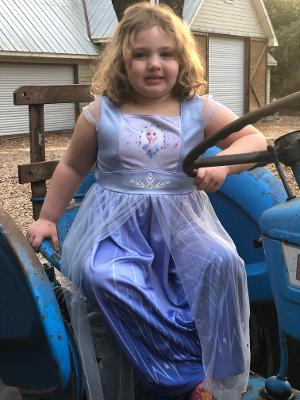 I did not take one picture today so here's a picture I took yesterday of Magnolia June who was telling me that she was NOT leaving and since she could not sleep in the house because of the virus, she would be sleeping in the hen house with the chickens. In fact, she said she wanted to be a chicken and that was that.
Sweet baby.
Lily brought the kids over yesterday afternoon after I saw the Bidens enter the White House after their parade. It was good to see my boys and my little girl and my big girl and everyone had a piece of cake because I'd made one that morning, before the inauguration began. August helped me. 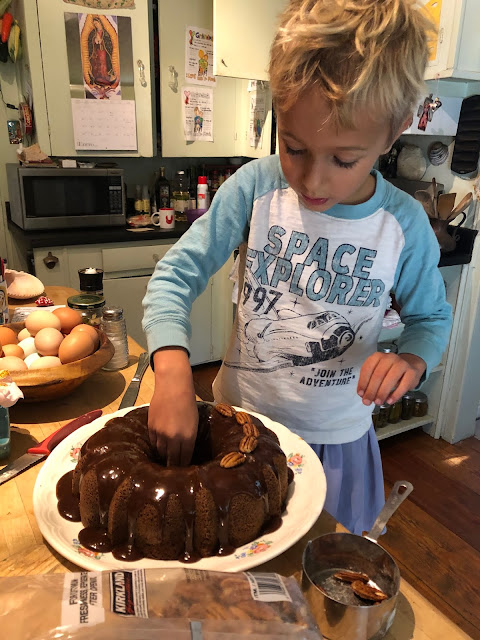 It was a prune cake, a very moist spice cake with a caramel glaze that I make traditionally for mamas who have just had babies. It's a recipe I remember from my childhood when my mother made one for my grandfather's birthday.
So between cake baking and all the crying and whooping and cheering and clapping and sweet visits and regular chores (although I never did make the bed yesterday- the horror!) I was exhausted last night but I slept so well, imagining Joe and Jill (I hope I'm not being disrespectful with all these first names) lying in their bed in their room at the White House, their new residence, their new HOME and did you see the footage last night of Joe holding a grand baby and dancing to Demi Lovato as she performed as part of the inaugural entertainment?
Oh my heart.
When I went to my compounding pharmacy today to pick up hormones, the lady who works there who is, well, older than me if that tells you anything, asked me if I'd seen Joe dancing with that baby. I see this lady once a month when I go to pick up my prescription and she's a hoot. She wears carefully applied make-up and beautiful clothes and her hair is always perfect. We've talked about a lot of things and I think her attitudes have changed in the last several years. We were talking about CBD once, and also cannabis and she said, "They're good medicine and I was raised a good little Baptist girl!" She loved the inauguration and before you know it, we were talking shit about Trump and she told me that until recently she had no idea what Biden's life had been like but she's learned a lot and she really thinks he's a good man. I told her I agreed with her on that, for sure.
I'll tell you one thing I know and that is to never make assumptions about old Southern women. They'll kick your ass and blow your mind.
And their eyeliner will still look good.
So yes, I had to go to town today and now I really am exhausted. I had two prescriptions to pick up and Mr. Moon needed a ride to shuttle a car and I went to Costco and Publix, of course. Costco was fast and easy but then I went to Publix where I had about ten things on a list to get and ended up with a car filled with groceries because I still seem to be in hoarder/stasher mode.
I mean, not really. I don't have fifty pound bags of rice and beans around. It's more like I just want to make sure that I don't run out of anything necessitating an extra trip to town. Like...stewed tomatoes? Jasmine rice? Goat cheese? Sweet potatoes?
Are these even necessities? No. They are not. We could live for a month on what we have here, easily. But if we had to, wouldn't we need more flour?
Yes! Yes we would.
Or so it seems to me. When I'm in Publix at least. Walking through that door is like entering a portal to another universe where there is no way to escape without filling up my cart.
I need to get a grip on this problem. But honestly, my refrigerator and freezer and cabinets are not overfull. Okay. Maybe the freezer is. And yeah, there are two freezers in the garage but that's just venison and pork and...frozen green beans and field peas.
Yes. I have a problem. OKAY!
I finally made it home where of course everything had to be hauled in and put away and then I had to take the trash and get the clothes off the line and why I even hung them out is a mystery because they were still damp when I brought them in. So. Into the drier they went for a little while. They're ready to come out and be folded and of course dinner needs making. I hope I make it through to bed time.
I haven't paid much attention to the news today beyond having a vague knowledge that Biden is kicking ass and taking names, rockin' and rollin' and undoing as much of the damage that Trumpty Dumpty did as possible.
I saw via Rachel on FB that the White House online "contact us" section asks for your pronouns now. Such a small and yet huge thing. I read a few weeks ago that some woman disguised as a reporter, asked Biden how many genders there are to which he replied, "At least three. Don't play games with me, kid."
That "kid" charmed my heart. He's so old-fashioned and yet, so very, very forward-thinking at the same time. I sort of wished yesterday that he would put those sunglasses on because he looks like the coolest granddad in the world in them.

All right. I've gone on enough.
Oh! I asked a woman very politely to pull her face mask up to cover her mouth and nose in the check-out line at Publix today. I felt sort of like a Karen but then I thought, "Oh hell. I'm an old Southern Woman. I can get away with this shit now."
I suppose I better start wearing eyeliner.
Love...Ms. Moon
Posted by Ms. Moon at 6:23 PM