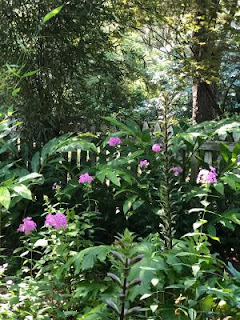 The phlox are beginning to bloom, dotting the yard with lavender everywhere. That always makes me happy. I will tell you what does NOT make me happy and that's the freaking mosquitoes which the  rain brought along with the greening of everything. They are fierce this year and there are multitudes. We seem to have a new breed of them which I do not recall seeing before but my memory, being what it is, could just be failing me.
Our usual mosquitoes are quite small and fast and they can land and suck enough blood to leave a small stain of it on your skin before you register their presence and slap them. Going out to pick the garden at the end of the day is an exercise in torment. If you're going to be out for long you simply have to use bug spray. And those are bad enough.
However, this new (to me) mosquito is about ten times as large as the usual ones. At least. And black as Satan's toenails. They have a proboscis on them that's about as big as an insulin needle and I read that because of this they torment cattle as well as humans. I looked them up and they appear to be commonly called "gallinippers" and are not unusual. The larvae can be in a state of suspension for years before the elements all come together at which point they develop and hatch. The good news is two-fold: They don't carry disease and they are relatively slow.
I'll tell you what though- they're a lot tougher than the regular skeets and the other night I almost decided that the one I was trying to kill was a vampire, seemingly dead and then arising and righting itself over and over again as I slapped at it.
And yes, I do slap them. Buddha himself would do the same if set down in rural Florida after a good rain. When I took my walk this morning and stepped into the woods to pee, one attacked me and I killed that sucker.
Haha! Sucker.

I didn't can anything today but I did pull kale that was completely stripped of leaves by bugs. Also some collards. And I did a little weeding and mulching too but honestly, not much of any of that. I picked a few more green beans and tomatoes. I am not weary of them yet but that day may be coming. I've picked two cucumbers so far and more are blooming and forming and I've picked a about two handfuls of crowder peas and put them in the refrigerator, waiting for more to shell and make a meal of.
That is always something to look forward to.

I was going to go into Publix and Costco today but after my walk I decided to stay here and attend to things and go tomorrow. I am still as anxious as ever about being around people. Jessie says that everyone she knows is mingling with family like crazy and so many of the mothers in her mothers' group are inviting her to play gatherings with all the kids. Meanwhile, Lily reports that two Publix employees (not at her store) have tested positive for the virus, and cases are going up dramatically in Florida.
You know what I wish?
I wish we had a government that would give us the actual facts and make advisements on them. Did you see the news about the bar in Jacksonville opening and sixteen people who had gathered there for a birthday all came down with covid? They had to re-close the bar. And yet our governor is parroting the administration saying that the reason the numbers are going up is that there is more testing.
Right.
But I really want to know what the risks actually are for me to hug and kiss on my family. I want to be able to weigh the pros and cons with accurate information and advice from people who know what they're talking about. Trump seems to have decided to just completely ignore the whole situation except to put out statements about a possible vaccine but he thinks that there's an AID's vaccine and I wouldn't trust him to tell me that we need oxygen to breathe.

Well, once again- this is what it's like in the year 2020. Uncertainty, unhappiness, unemployment, unrest, unbelievable.

Meanwhile, I need to make supper.
I hold on to that which is constant. It gives me some comfort.