Don't We All Want To Go To Meximo City? Or Even CiCi's Pizza? 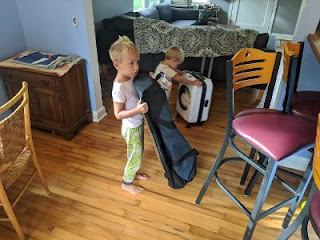 I got this picture early this morning from Vergil. He said, "These boys just got out the luggage. I asked them where they are going and August said, 'Mexico!'"
Boys after my own heart.
That triggered two very specific memories for me. One was of Owen when he was little and how he'd dig out my old college-era red Samsonite from the closet under the stairs and he'd pack a few stuffed animals and a few books in it and we would go on a trip. Mostly we went to Cici's Pizza which is a place I've still never gone in reality.
The other memory was of Jessie when she was a young'un. She'd wrap scarves around her head and say, "This is what we wear in my ancient land."
It was almost one of those eerie child things, the way she said it with such confidence and certainty.
Finally one of us asked her, "Where IS your ancient land?" and she said, "MEXIMO CITY!"
I know we forget so many things that our children do and say that, when they happen, we think, "Oh, I shall remember this always."
But some things are never forgotten and traveling with Owen to CiCi's Pizza and hearing about Jessie's Ancient Land are two of them.

This is what the sky has looked like all damn day, due to the Saharan dust storm. 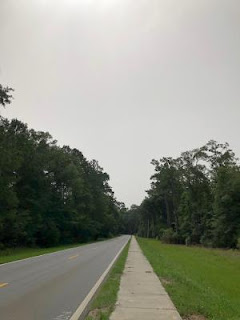 A sort of sickly gray-white but when I walked, it didn't seem to bother me in any sort of way and actually prevented the sun from beating down on me full force. I passed No Man Lord's place and he and a friend were sitting under a tree, talking. They waved. When I walked past the house where the little chihuahua comes and barks at me like a guard dog for the palace, two people were getting into their car and we waved and said, "Hey!" and the man held up a little bag and said, "Do you need a mask?"
How sweet was that?
"No thanks!" I said. "I have one. We wear them!"
I am so lucky to have such nice neighbors.

After I got home I procrastinated for quite awhile, knowing I needed to go to town which I eventually did. I had a prescription ready for pick-up and I had a grocery list. I thought I'd go to the pharmacy and Publix and Costco but after the pick-up and Publix I had crossed everything off my list except for Vitamin D3 and I seriously doubt that we'll be dying of lack of Vitamin D anytime soon around here. The very fact that our past bloodwork has shown a deficit of it for both Mr. Moon and me makes me suspicious as hell about the recommended daily requirements but that's neither here nor there, point being that I didn't go to Costco.
It was somewhat of a relief in Publix to see everyone wearing a mask. Without exception. There weren't many shoppers in the store, either, so it was a fairly easy trip. Still, I was so grateful to get home and unload the car and put everything away and get supper started. I've got a venison meatloaf and a homemade green bean and mushroom casserole ready to go into the oven. Mr. Moon called me a while back though and said that he's dealing with the plumbing problem at the duplex AND he has all of his tools to pack up to bring home so who knows when supper will actually be served?
I went out to pick the garden and despite spraying myself the mosquitos were still a sort of exquisite torture. The tomatoes, quite sadly, are just about done. The green beans seem to be slowing down. With any luck though, the cucumbers and field peas will be rolling in like crazy now. I bought another dozen canning jars today, just in case the cukes are really, really prolific.

And in pandemic news, Florida broke all the records reporting almost 9,000 new cases today. And we thought that the previous record of 5,508 new cases set on Wednesday was bad.
Haha.
The governor has decreed that all bars have to stop serving alcohol. That's a start, I suppose.

Just got a text from the man. He's on his way home. Things are in the oven. His martini glass is chilling in the freezer.