So Many Ways To Get Your Heart Broken 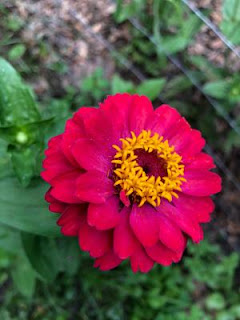 I do indeed have a hen on the nest but it's Dottie, not Darla. I'm pretty sure. She's doing that flat-chicken thing, spreading herself out like a chicken breast cutlet smashed for Chicken Cordon Bleu. Except she is alive, has bones, feathers, and eggs under her.
I only found one egg today, or rather Jessie found it, and I have a feeling any others that may have been laid are under her warm flat body. She'll be doing this for at least the next month. First she has to lay and collect all the eggs she wants to sit on (and I have no idea how this is determined) and then begins a period of the twenty-one days or so that it takes the eggs to mature and hatch.
This is one hell of a commitment as she will hardly get off the nest to eat or drink or take her baths in the warm sand. I guess that the hens wait until the beginning of summer when they've eaten all of the fresh green things and bugs that spring brought to them so that they are well-nourished for the journey they have to undertake to become a mother hen. 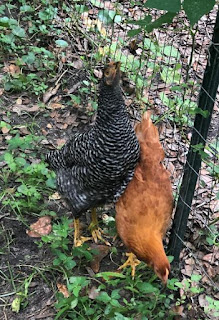 So here we go.

I joined Jessie and the boys this morning at a different blueberry u-pick farm, this one right down by the Wacissa where we always swim. The bushes were heavy with the berries and by the time I got there Jessie had already picked at least four pounds with the help of August and Levon, of course. I picked about a pound while conversing with the boys which is the reason I went- to have conversations with them. It's always the best chatting when hands are busy. Levon got tired though and so we called it a day and went and had our berries weighed and we also made purchases from the little nursery they have going there. 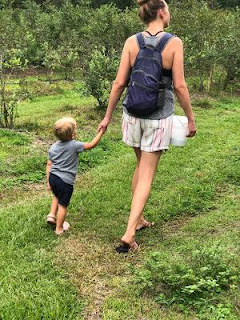 Jessie bought a basil plant, I bought one too, along with a small gardenia. Now I just have to find a place with enough sun to plant the gardenia in.
We went down to the river to check out the situation and there weren't too many people there but Jessie, who got out to look, said that the water appeared to be mucky which is very unusual and we decided to skip it today. It was overcast while we picked so we weren't dying of the heat as we usually are after a wandering in the blueberries. We came back to my house and once again I broke isolation rules and Jessie and I both felt very guilty but I didn't hug anyone and I didn't kiss anyone and I didn't eat or drink after anyone and there you go. The boys played with toys and we read a few books. Levon wanted the dump truck book again and so I read it. One of the pages has a truck which is "too big to go on a road."
Levon asked why it would be too big. I, having no real idea, told him that it would break the road because it was so big.
He thought about it for a second and then in his old-man two-and-a-half year old voice said, "Oh. I get you."
August did some puzzles in record time and it reminded me of when Owen was a jig saw puzzle master. He asked me to make a video to send to Boppy, showing him the puzzles and his explanation and so I did.
His Boppy reminded me in a text back that the number of reported Covid cases in Florida was the highest it's been yesterday. No surprise there as all of the people who were exposed as they partied in public places for Memorial Day are now becoming ill. We can only assume that the protests, no matter how hard the protesters try to remain masked and socially distant, will expose many, many more. And so yes, it is absolutely time for me to step back and stop taking foolish chances with my family.
Fuck.
When they were about to leave today, August said, "MerMer's are for loving on you."
Sure I cried. Who wouldn't have?
I gave them treaties, as they call them, when they got in their car seats. A Hershey's kiss apiece. They are content with just that small amount of chocolate wrapped in pretty foil.

Jessie picked me one of the blooming Glory Bower blossoms before she left. Remember the Glory Bower? Probably the worst invasive in my yard. But this is why people plant them in the first place: 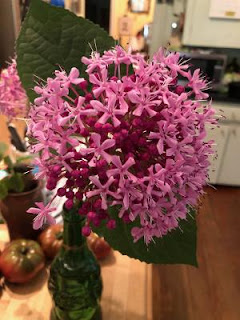 They are, admittedly, a glory.
And evil.

Speaking of evil I cannot, even now, believe what Donald Trump said today about George Floyd. He was having a little press conference to let the world know that unemployment is down and said, and I quote, "Hopefully, George is looking down right now in saying this is a great thing happening for our country. A great day for him, a great day for everybody."
Because employment is down.
The man is so much more despicable than we could have ever imagined and we sure imagined some despicable shit.
Meanwhile the police are taking masks and cell phones from protesters, injuring people, killing people.
Killing people.
And Trump used the phrase "dominate the streets."

I've got that tomato pie in the oven. I messed up the pastry while doing a pre-baking but hell, it's got tomatoes and cheese and mayonnaise and an egg and bacon and shallots and garlic in it. A heart attack in a dish with some tomatoes, basically.
We are not exactly eating cake as the streets burn but instead a savory pie and I am sure that Marie Antoinette would approve.
Oh, if we only still had the guillotine.
And hey! It's time for a martini!

Y'all, I'm scared. I'm scared of it all. But I tell you what- my grandkids think that Mer's are here to love on you. I've done my job. They ALL know I love them. And right now, at this point in my life, all I feel like I can do is to love as fiercely and purely as I know how.