Chili Sauce And Other Canning Stories

The last time I went to see my darling doctor GP I convinced him that seeing me in a year would be sufficient and he agreed, okay, that'll be fine, but come see me if you need anything...
And so forth...
And although I adore him, when I made an appointment for 2020 and then floated out of his office on gossamer wings I thought, "Well, I don't have to worry about that again for another year."
And of course in April I started getting anxious about going back and then May was worse and all of June I've been waking up every morming thinking, "Shit. I have a doctor's appointment."
It's next week and so I had to go get my blood drawn so that he will know all of my secret innermost numbers and quite frankly, when the whole Coronavirus thing started I actually believed that I might be able to just skip the whole process and I probably could get away with that but, oh hell. You know.
So this morning I went to the lab and had to wait about forty minutes in a waiting room where people were spaced apart but not six feet and yes, everyone was wearing a mask. You had to. We were "screened" before we were let in which meant that they asked us, as a group waiting in line to sign-in, if we had any flu-like symptoms or a fever which is basically bullshit.
I don't mind getting my blood drawn in the least and I think today's stab was the most painless I've ever had. I really did not feel the needle.

But, whoo. And phew. That's over. I am not sure why I hate the idea of my blood being used to reveal my innermost workings so much but I absolutely do. It's a big part of my medical neurotic fear. But that vial is out of my hands (arm?) now and that's that. Dr. Zorn can tell me all about it when I go see him next Tuesday.

It's raining again, softly and gently. A few thunder rumbles. The power has flickered but so far, we're hanging in there with it. I spent most of the afternoon making chili sauce, basically following another recipe in the Ball Blue Book. I added a few things to it- garlic and celery, but stuck to the recipe for the most part. I peeled and chopped my tomatoes, put chunks of onion and red peppers and jalapeno peppers, the garlic and celery in the food processor and then cooked all of that until it boiled down some with sugar and salt and spices, added vinegar and let it boil and thicken some more. This time I got three pints and the stuff tastes lovely. It's not very spicy. My jalapenos, although large and shiny don't have a lot of heat, I guess. That's all right. 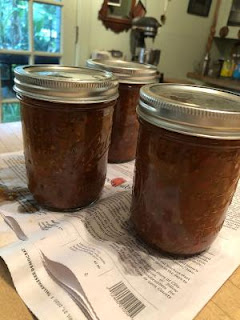 I picked more tomatoes and beans and four more cucumbers before I started the sauce. Not quite a gallon of beans today but quite enough. Tomorrow I need to do something with all of them.

One of the nicest things I remember from my first marriage was a night when my then-husband came in late (as usual- he was a musician) and he had with him a friend from out of town who was going to spend the night and I didn't get up when they came in but laid in bed and listened as my ex showed the guy all of the pickles I'd made. At that time I stored them all on and in a beautiful old kitchen cabinet that I still have. We had bought it from the same woman who sold us our house which we had moved to our land where we were living at the time. A Hoosier Cabinet, I think they are called. In fact, here's a picture of it. Yes, it's cluttered but that's what it looks like right now.
So I'm laying there in bed (it was a small house but I loved it so) listening to this conversation going on and next thing I know, the ex is popping open jars and they're doing taste-testing of my pickles. And I mean there were many dozens of jars of different types of pickles. I'd grown and pickled hundreds of cucumbers that year and as I listened I realized that he was proud of the work I'd done although I'm not sure he'd come out and said so. Of course there was also the element of look at what good homesteader hippies we are when it had all been my work but my overall memory of that night carries a sense of sweetness overall.
And I am so glad of that.
One of the good things in my life is that he and I are still friends, can still hug and make each other laugh. That we get along well with each other's spouses and overall, it's a good relationship. He and his wife have passed on kid things to Lily after their granddaughter (from another relationship) outgrew them. They are neighbors of a sort, living close enough that if Lily ever needed their help, they could be there quickly and I know they would.

I'm rambling. Pickles to the past to the present. So it goes.

I'm very tired tonight. It's raining harder now and Mr. Moon, who just got home, isn't able to out and look at his garden. That's what he loves to do when he gets home. I can remember when I had the garden that grew all the cucumbers for all those long-ago pickles, coming home from a little trip out of town, arriving at night and taking a flashlight out to the garden to see how everything was coming along. You can get pretty attached to a garden.
As a metaphor for growth and change you can't beat it and there's fresh vegetables too.