At Least I Got To See My Babies Dance 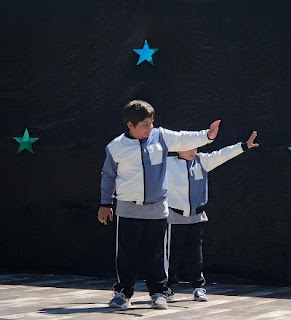 Lily texted me last night about Maggie and Gibson's dance recital today. I sighed deeply. First of all, it started at nine a.m. Secondly- the pandemic.
I know that everything is opening back up but I also know that Florida has had more new cases in the past few days than we've ever had. The recital was going to be outside so that did help the situation but the heat was supposed to be fierce.
I went to sleep deciding to see how I felt about it all in the morning.
I felt about the same in the morning which is to say that the idea didn't thrill me but there was no way I could not go.
My babies.
And so I did.
I sat in the shade but people kept encroaching on my space.
Unmasked people. I'd say that at least 75% of the crowd was not masked and people just crammed up next to each other. I could not believe it. These were parents and siblings and grandparents.
But I stayed to myself as much as I could and wore my mask the whole time. And it was hot. I was fine, really, where I was in the shade, but the people who sat in the seats in front of the stage had to have been roasting.
Both kids did very well. I think back to Maggie's first dance class and how she cried and clung to her mama and refused to participate and it is amazing at how far she's come. 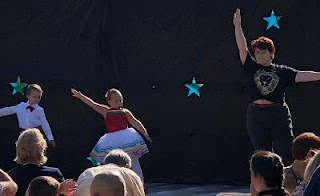 The youngest children's teachers got onstage to dance with them and that worked out well. One of the teachers had to hold a little girl who wept for part of the dance. My heart broke. But the teacher just carried her and danced with her in her arms and the little girl had quit crying by the end. One little boy simply walked off the stage.
Done!

Gibson's group of four boys doing hip-hop was darling. I asked him later if he'd been nervous. He said he really was up until he got on the stage and then he was fine. Sounds like a born performer to me. 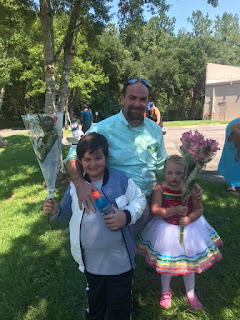 Jason and his dancing babies.
Maggie was over it by then as you can clearly see. 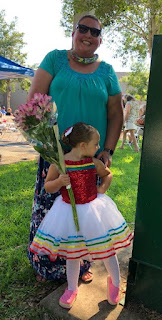 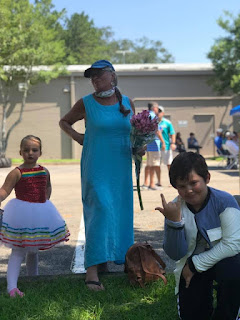 I love this picture. It's one of those rare snaps that just comes together. Maggie got tired of holding her flowers so I did it for her for awhile.

After it was all over I went into Publix where I bought the canning jars I forgot yesterday. By the time I got home it was lunch time and after I ate I fell on the bed and slept for a few hours. I was worn out. When I got up I shelled some of my field peas, quickly realizing that I've been picking them too early which is a damn stupid rookie mistake but I managed to get a supper-sized portion out of them and they're simmering now. They'll be delicious. And most definitely tender.

So that's what it's been like today. Dealing with the unmasked masses has taken just about everything out of me. It's so stressful even when you feel like you're dealing with it as best you can. I think that part of it is that everyone I see without a mask looks like a Trump supporter to me. That's how political this has gotten. And if not specifically a Trump supporter, then at least an ignorant human being who doesn't give a shit about his or her fellow human beings. And that's just as depressing.

What the hell is wrong with this country?
When did we become a nation of such non-caring, selfish, science-hating, lies-believing, racist assholes?
I could probably go do some research in Tulsa tonight.

Be well. I wish I could hug every one of you. Right after I hugged every one of my family members.
But the way this is going, we're going to be in this mess for a long, long time.