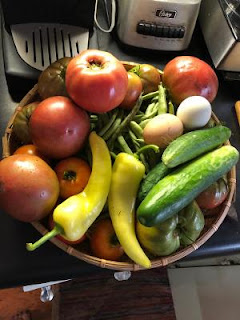 The green bean situation over here is getting out of hand. Every day I pick a gallon. A gallon bag of green beans. Tender, lovely, tasty green beans.
NO ONE CAN EAT A GALLON OF GREEN BEANS A DAY!
I'm not complaining. I just need to get on it with the preservation. Also of tomatoes. Time to make tomato sauce. Or more ketchup. Spaghetti sauce. Something.
And now the cucumbers are coming in. You know what I have to do with cucumbers.
Make more pickles.

This is not a bad problem to have. I'm just glad that Mr. Moon is going to be making me that pantry soon.
Haha!
Well, he has to be finished with the duplex by this weekend because Hank and Rachel are moving in. Honestly, he needs a vacation. He hasn't done this much physical labor on such a constant schedule since he was barely more than a boy.

Our friend that came by on Sunday morning is about to buy a farm with his wife up in Tennessee where they live. He showed us pictures. Guess what that house has in it?
A CANNING ROOM! BE STILL MY HEART! I wonder if Mr. Moon would like to make me one of those.
Probably not.

I sure am doing a lot of yelling today. Sorry.

So here's a picture from my walk today. 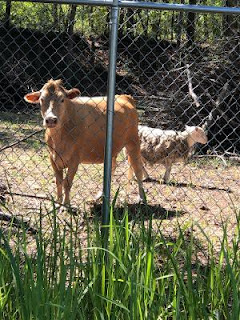 The wildlife of Lloyd. They need to shear that sheep. It must be eighty thousand degrees under that wool sweater that she's wearing. Poor thing. Doesn't the cow look like she's saying, "Don't you touch my sheep!"? I like her hairdo. It's sort of fancy up there on the top.

So yeah, I took a walk and it was horrible. I won't say more than that.

We've been having little spates of thunder storms since last night and another one showed up in the early afternoon. It was really nice except for the fact that our power went out. I decided to just go lay down on the bed since I couldn't sew which is what I had planned to do. It was so nice and cozy. Jack came in and jumped on the bed and snuggled up as he does 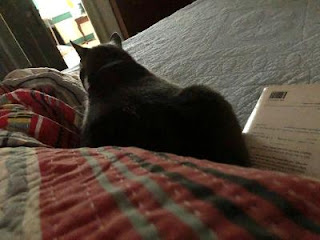 between my butt and my knees and then the power came back on and although I hadn't been sleeping I was so relaxed that I felt like I couldn't get up. So I just laid there for awhile and then I did get up and did a few things and made Mr. Moon a mask. I have just enough elastic for two ear loops. I hope he likes it. Mostly I hope it works.

It's raining again which is lovely. I did get a chance between storms to go out and pick those vegetables and gather a few eggs. So get this- Miss Darla was back in the nest box I took her out of yesterday, sitting on two different eggs that had just been laid by other hens. I sighed and took those eggs out from underneath her and put her two from the other nest where I'd moved her yesterday back under her.
I'd say that she's not the brightest hen in the hen house but then again, Dottie is on another nest, sitting on her one egg so maybe she is.

The mosquitoes have not abated either in their numbers or in their hunger. I had to spray Deep Woods Off on me to be able to pick the garden. I really should take a shower before my husband gets home. But hey- the insect repellent covers up the noxious sweat smell from my walk, right?
Uh-huh.
Eau de Florida Woman.

I feel a great need to share some pictures of Maggie that Lily sent recently. Here's one from last night when Maggie was trying to convince her mother that Pepper (the dog) needed a pillow. 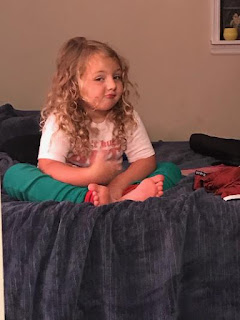 Can you stand it? Those little feetsies, that hair, that expression? She reminds me so much of her mother when she was a little girl who, when she was trying to convince me to let her do something I did not think she should do, would say, "It's all right, Mama. It's okay," in the most placating, mature voice you can imagine.

And here's another one from today when Lily bribed her daughter to let her brush her hair out. 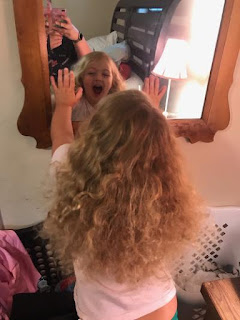 And if that's not a glory hallelujah head of hair, I don't know what is. It's like Magnolia June's spirit made visible.

I just saw on Facebook that the Leon County commissioners unanimously voted to require the wearing of face coverings while in any public space indoors, including grocery stores, churches and buses. HURRAY! Lily is thrilled. She is sick and tired of customers blatantly ignoring the well-being of other shoppers and Publix employees. Who knows how many lives will be saved by this edict? I'm proud of those commissioners. They did the right thing.

So that's about it around here. Anything exciting happening where you are? And by exciting I mean...basically anything? Like, did you see a sheep today?
Yeah. Like that.

I better go start making supper. I'm pretty sure that tomatoes will be involved.