I Think He Has Had A Good Birthday 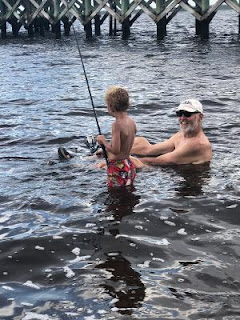 There's a picture of Mr. Moon and August fishing down at Mashes Sands which is a beach on the Oclockonee Bay, about an hour from here. Jessie and Vergil have been taking their boys down there for awhile now and have found a place that is almost always deserted except for them. They asked us if we'd like to meet them there today for Boppy's birthday and we did. 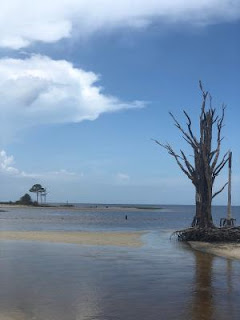 Where they set up their little camp is on a tiny island created by a stream which feeds into and out of the marshland. The water between it and the land is not very deep at all and during a low tide, just a few inches deep in some places, perfect for the boys. 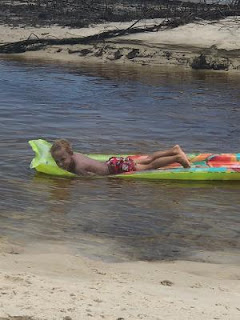 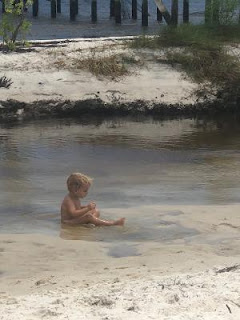 Perfect for mamas, too, who can just lizard out in the water and watch the children and talk. There's a deeper part where August practiced his swimming with his daddy.

It was so sweet. Jessie had picked up subs for us and a cake, too, because I didn't have time to make our dessert. It was a small cake, a delicious cake, a cake with a whole lot of icing. The boys especially loved the cake. 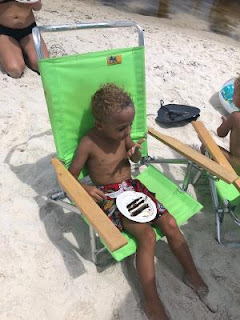 Can you see how dark August is getting? The contrast between his butt and his back is crazy. I'd love to see a genetic study done on him because somewhere there was at least one darker-skinned ancestor. And Jessie keeps the boys covered in sun screen. 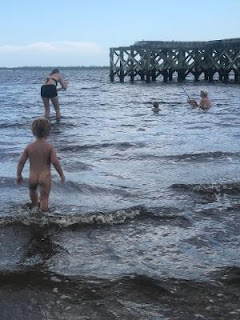 Levon has one of the cutest butts in the world.
As you can see, there was a little fishing going on. One small redfish was caught and released and Mr. Moon wants to go back at change of tide sometime soon. The tide was slack while we were there today which I hear is the worst time for fishing. But it was fun for those who fished and I doubt anything in the world could make Glen happier than fishing with a grandchild. And I got to visit with Jessie and Vergil safely outside where the wind was blowing and seagulls were bitching at us and I got to talk with the boys, too, and watched August swim and played with Levon who was dragging a fish-float around like a dog on a leash, being happy.
He was splashing with his mother when Vergil came up and kissed Jessie and Levon said, "I want kiss too," and Vergil gave him a sweet kiss and then Jessie gave him one too and I teared up. I love the way they love.

All right. I need to get in there and make our supper. Mr. Moon enjoyed the pizza so much the other night that I've decided to make it again. We have the tomatoes, the basil, and the arugula and they won't last forever. I want us to eat them while they're in their glory as much as we are able and as often.

Tomorrow is my appointment with my doctor. By this time tomorrow it will all be over.
I am looking forward to that.
Meanwhile, I keep reminding myself that I do love this doctor, I feel quite healthy and well except for anxiety, and chances are good that I don't have any dire diseases.
Or so I tell myself.
Anxiety brain is singing a different song but as we all know, some songs are nothing but annoying bullshit which become earworms and they do eventually pass.