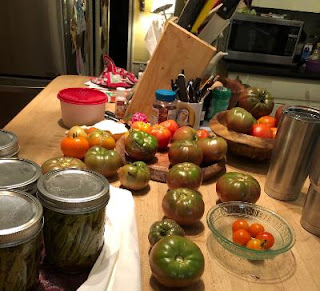 I took that picture last night. Those are some of the tomatoes we'd picked and some of the beans I'd pickled. Today after my walk on Whitehouse Road which was lovely and not too hot I decided to do something with the tomato bounty. Or at least some of it. There's a part of me that doesn't want to do a thing with these tomatoes except to eat them, one after another. But I figured that we'll be getting more and we can't possibly eat all of them or least it would be very difficult and not very prudent and I wanted to make some ketchup.

Years and years ago Mr. Moon's daddy put in a garden and he did what I call farmer-gardening meaning he wasn't exactly what we might describe as all-natural or organic or anything even remotely like that but by god, he grew some tomatoes! He grew so many tomatoes and brought them to me to do something with that my kitchen became a canning factory. I canned tomatoes and salsa until I was sick of canning tomatoes and salsa. So I tried making some ketchup and I have no idea what recipe I used but I remember it as being so very good and not much like what comes from Heinz although I do like Heinz ketchup. Truly.

I got out the canning Bible, the Ball Blue Blue Book (and yes, that is the name of it) and found a recipe in it that sounded pretty okay. 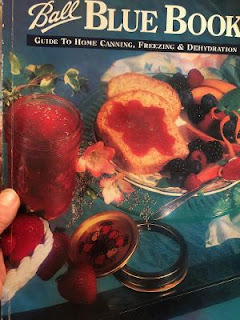 So I tried it. First I had to dunk the tomatoes in boiling water for a minute or so to get the skins off. And this is what they looked like in a blue bowl after I'd done that. 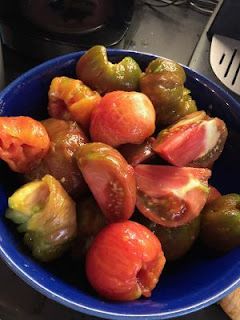 Then the recipe said to "cook them" along with chopped onions and red pepper until soft. I like the fact that they just assume you know how to do that. 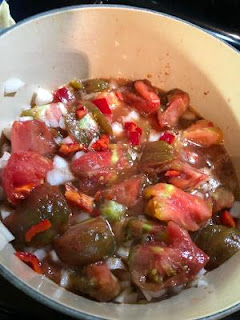 So I cooked the tomatoes and peppers and onions in my big Le Creuset pot that my man gave me for Christmas until they were soft and then I drained the vegetables, keeping the juice and pureed them in the food processor although the recipe said to put them through a strainer or a food mill. My copy of the Blue Book is from 1999 so there you go. I put the puree back in the pot with the juice and boiled it down for about an hour. I suppose you would now call this "reducing". We used to just call it "boiling it down."
At that point I added a spice bag with a half a cinnamon stick, some mustard seed and celery seed, then some allspice, a tiny bit of ground cloves, sugar, a bay leaf, and salt. And set it back to boiling. You cook all of this for about twenty-five minutes and then add vinegar and cook until thickened.
Of course while all of this is happening you have to boil your jars and lids.

Every time I'm in the canning process I recall what it was like to can in a kitchen without air conditioning.
Hell would be the short answer. I know because when I was a young hippie I used to can and pickle like crazy and we did not have AC.

Can you imagine being one of those ladies who had to put up food in the Florida heat? Using a woodstove? It must have gotten up to at least a hundred and ten degrees in those kitchens. And this wasn't any hobby. This was do or die. Literally. If you didn't grow a lot of food and then preserve it your family would just starve in the winter.
And no running water either so you either had to haul water for the canner from a well or a pump out back.
I love to think of myself as being all Florida pioneer-y and stuff here in my old house where women have been canning and keeping chickens and making bread for a hundred and sixty years but I'm just playing at it. I doubt I could last a week doing what those women really did.
But I do love to play at it.

So after my ketchup had thickened and my jars and lids were sterilized I filled the jars and processed them for ten minutes in boiling water in the canning kettle and although all of this is just a picnic in the park compared to what the strong women did in the olden days, it's still a bit of work.

And guess how much ketchup all of that picking and peeling and processing made? 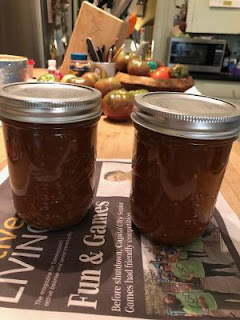 Exactly two pints. But those are two pints of the most delicious ketchup you can imagine and my kitchen smells like tomato heaven.
And besides- what else am I going to do here in the days of the pandemic?

Jessie sent out a picture of Levon today. 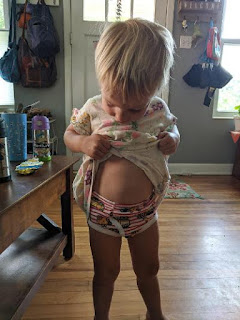 He's showing off his new dress and new track-hoe underwear. The dress has pockets. He's so happy. August, however, burst into tears because he wanted a new dress too.
Of course I'll make him one. And of course it will have pockets. Everyone needs pockets and that's all there is to it.

I'm off to go snip and snap and cook some green beans, slice tomatoes, bake pork chops and sweet potatoes. I might even make some muffins. Have you ever grated fresh ginger into your muffin batter?
You should.