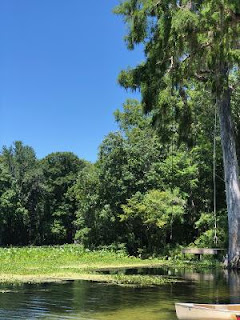 Jessie texted this morning that she was going to take the boys down to the Wacissa to see if they could safely play and swim about and in a while she texted again saying that although there were lots of boats going out, she and August and Levon were the only ones on the little beach area and would we like to come join them for a dip?
Oh yes we would.
So we lickitysplitted it into our bathing suits and into the car and on our way to the river and by the time we got there there were still only one or two other people in the water. Lovely. The boys were happily shoveling in the sand and August started jumping off the dock and I got in and dove under the crystal clear water for my first holy baptism of the summer. 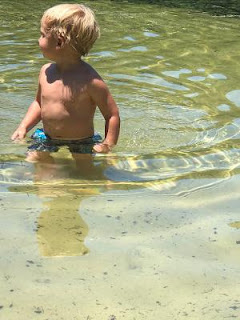 I wanted to kiss Levon's little tummy so bad. This physical yearning for my babies is not getting any easier. But. Yesterday there was a 35% rise in the number of Covid cases reported in Florida which is the highest number we've recorded. We've already had 73,552 cases of reported Covid in the state and 1,295 deaths.
We have to be as safe as we can. This is not the time to become complacent. It just isn't.
At least that's what I think but I quickly realized at the river that it's not what a whole lot of other people think because just a few minutes after I had my little blessing dive, folks started arriving. Within twenty minutes there were people everywhere. The canoers and kayakers were coming in from the water and the rest of the hoards were coming in from the land. There must have been at least fifty people by the time we got packed up who rushed the little beachy area with their coolers, their chairs, their umbrellas, their floats, their towels, their kids.
And no one seemed to give one good damn about social distance.
We absolutely could not pack up our stuff quickly enough not to be exposed to I have no idea how many people. And masks?
Hahahahahahahahahahahahahahahahahaha!
Mr. Moon who was putting one of our chairs back in its carrying case politely said to one woman who was obviously desperate for our shady spot to please give him "ten minutes and six feet."
Twice he said that.
She completely ignored him.
He showed huge restraint in not screaming at her in my opinion.
This is just ridiculous. And the damn state AND federal government are being horribly irresponsible and reckless in allowing things to open up again. People are going to be flooding the state for their annual beach vacations and of course the fucking damn stupid shitass Republican convention is going to be held in Jacksonville in August.
I'm sick of all of it.
On our way to the river we passed a house that had a huge flagpole flying an American flag and a Trump/Pence flag, and there was an enormous cross in the yard. Big enough to crucify Godzilla on. Mr. Moon said, "They're missing one thing."
"What's that?" I asked.
"A confederate flag."
"Oh god. You're right," I told him.
Did I already say that I'm sick of all of it?
You know what's crazy? The fact that everyone in their right mind isn't protesting in the streets.
With masks on. Staying six feet apart.

Well. Here's another picture of my precious boys. 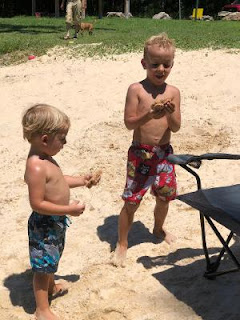 And I want to make it very clear that I am not complaining that we had to leave the river before we may have been quite ready to go. I feel extremely lucky that we were able to enjoy the peace and beauty of it for even a few minutes. When we felt that it was no longer a safe environment we had the choice to leave and we did. What I AM complaining about is the absolute disregard for personal or other people's safety that is being shown. If we had a president who listened to the advisors who are qualified to help him make decisions concerning the way this pandemic is being handled things would be different. But just as with racism, homophobia, misogyny and violence, Trump is enabling (and even encouraging) behavior which is nothing short of deadly.

I joke about going to hell. I don't believe in hell. Not in the least. But if I did, I think that Donald Trump, or King Dong as I think I will start calling him, would have a burning suite in the deepest, reddest, hottest pit of it just awaiting his arrival.
And he couldn't get there too fast for me.
I can't blame everything on him by any means. Obviously we are not the nation I believed we were. But by god, he does not have to constantly try to appeal to the lowest denominator of humanity while at the same time, blessing the richest of the rich with more and more ways to become even richer.

That's about it for now.