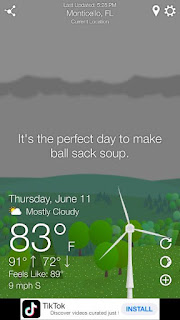 From my WTF weather app.
I forget to even look at it for months at a time but it's so miserably muggy today that I thought I'd get their take on things and I have to say that it's right on point.
Are we going to have to listen to her bitching about the weather every day for the next six months? you may be asking yourself. And the answer is- maybe.
Also, my "real" weather widget says that it's 86 in Lloyd and "feels like" 97.
Either way, ball sack soup weather.

I walked on Whitehouse Road this morning and it was almost enjoyable simply because it wasn't on Old Lloyd Road. Also- more trees, more shade. Not very much traffic. I kept a good pace.

Here's a family portrait of the bebe chickens. 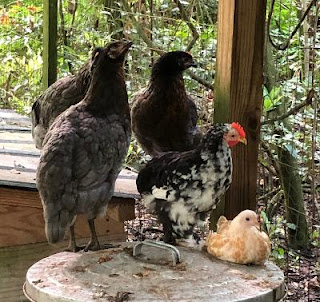 Forgive the poop. Chickens poop. That's what they do. Anyway, the dark gray ones are the three that I have not named although I think one of them shall be called Robin because she has a nice orange chest. They look so much alike though. And then of course there's Fancy Pants and Tweety Bird who still reminds me far more of a canary than she does a hen. She's so tiny! Could the Tractor Supply store have gotten a canary mixed in with the banty peeps?
I really don't think so.
Speaking of chickens, there's a rooster somewhere in the neighborhood who will NOT stop crowing. Something is definitely wrong there. Either he's in a perilous situation or else he is broken. I am becoming annoyed. Liberace, who generally responds to any and all other roosters proclaiming their roosterliness with crows of his own is ignoring this one.

I stole two eggs from underneath Miss Darla today. We've got to get some eggs. She doesn't peck the way Dottie does. She just makes tentatively threatening cluckings when I reach under her whereas Dottie goes straight for hand blood.

I picked more beans today, a few more tomatoes. Mr. Moon presented me with a huge bag of frozen mullet this morning (I am a bit fuzzy on where they came from- he told me but of course I've forgotten) so we're going to have fried mullet tonight. Mullet has to be either fried or smoked and that's all there is to it. In fact, I've never cooked mullet that had been frozen before so we'll have to see how this goes. It's absolutely the truth that the best way to cook mullet, whether by frying it or smoking it is to have it on the heat before it's been 24 hours out of the water although I hear that this fish was in the freezer before that time limit was up. I've got the squash croquette mixture made up and the tartar sauce made so I'm about ready to go into dinner making mode. I am still finding it very difficult to have supper on the table before eight. I just never think it's going to take me as long as it does.

I noticed on my way home from my walk today that one of my neighbors has Karen Purser's campaign sign in their yard. I am a bit surprised. These are not stupid people. They are, however, very Catholic, and I suppose they go to church with Ms. Purser.
Man, politics and religion are both extremely weird. Combine them and the devil will get his due.

The rooster is still crowing. I suppose I could get off my lazy ass and walk next door to see what's going on. I just don't have the energy. After picking beans and cleaning a few nests in the hen house today I was once again soaked in sweat. That made two distinct sweat-soaked experiences for me today including my walk and that was about enough outdoor activity for me.

Another day of time slipping by so quickly that it was two p.m. before I'd finished my lunch. I really do not understand this strange time-matrix we seem to be in and if the calendars aren't lying, it's going to be Friday tomorrow. The cardinals are making their evening chipping announcements, Liberace has just trumpeted a getting-close-to-last-call warning to the hens and I am looking forward to the moment I've showered and gotten into my bed and turned my fan on with almost obscene anticipation.