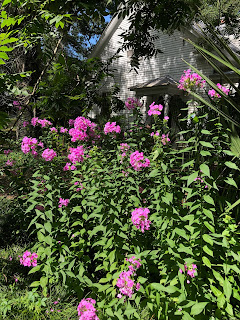 I pretty much took today off. Just...fuck it. I did a few things and I went to Publix and to Costco but I zoomed through those places like lard on a hot skillet.
Phsssssssshhhhh. 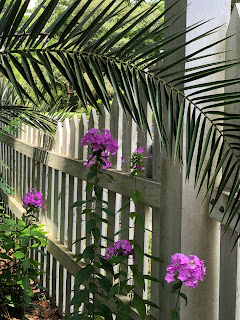 I did get a little taste of hell (although not much else) when I went to Costco. For some reason it had not occurred to me that everyone and their patriotic uncle would be there, getting ready for the 4th and there were many, many sample stations set up and they were GOOD samples like chicken salad and spinach and artichoke dip and chipotle black bean burgers but there were so many shoppers that only the people who had no qualms about pushing in front of others or a lot more patience to wait for a space to open up than I did got any food.
And if THAT isn't a first-world problem, I don't know what is. 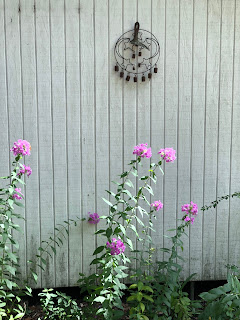 The pink phlox are just blooming everywhere in the yard. They are so cheerful and the butterflies love them. Speaking of which... 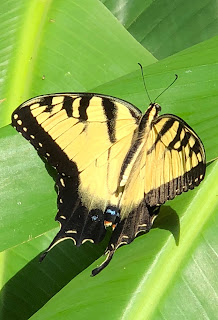 Here's another enormous Swallowtail on a banana leaf. I love the green and the yellow and the tiny dot of blue and of red, the black borders and the tiger stripes, too. What a fancy creature! 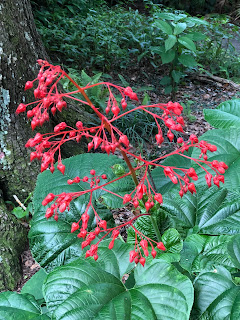 Does anyone know what this is? Ellen? It's about three and a half feet tall, including the stalk of blossoms and someone probably told me last year and I've forgotten. I dug some up from next door when no one was living there years ago and this year it is finally making a showy appearance. 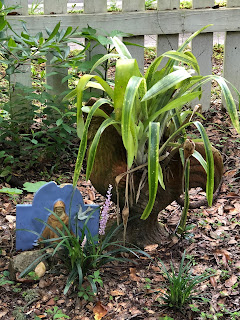 The grave of Elvis, our beloved and still-mourned most beautiful rooster ever. I buried him in the front yard so that he can keep watch over us all as he kept watch over his flock so faithfully. 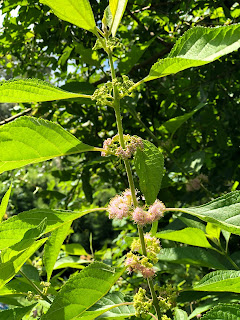 The coming-along beauty berry. In this picture you can see the blossom and the developing berries. Soon they will be the most gorgeous of fuschia colors. Their early colors are but pale indicators of what is to come. 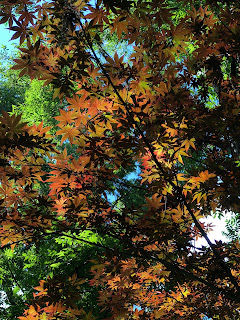 This is what the Japanese Maple looks like from below with the sun making glory of it. Is that not beautiful? The man who sold us this house brought it to the signing to give to me which I thought was quite lovely. It was not much more than a sprig then and now, it is a tree. 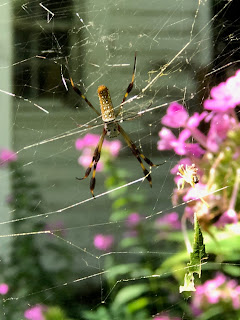 A young golden orb weaver who is tangling her web in the phlox. Oh! They will get so much bigger! They are so territorial that I feel as if I should name each one as they will all be in the same place until it gets cold and they die. 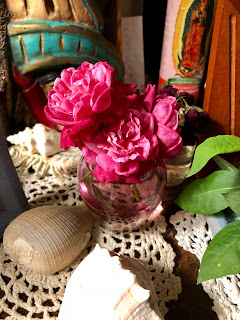 A tiny vase of the blooming June roses. I chose these at the nursery because they smell exactly as a rose should smell. And they are so perfect in their heirloom honesty of color and form.

And since I began writing this, my sweet husband has come home, tired as can be but with grouper and vermillion snapper which I have never even heard of and is sipping a martini in his chair. Well, he's probably snoozing. The rain, which was hardly even a rumor of a cloud an hour ago, is falling, falling, soaking the sweet dirt from whence all of these beautiful things come. The thunder is grumbling all around and it smells of heaven. The incredible gift of summer rain as it breaks the back of the almost intolerable heat.

Did you march today?
I did not but my son did. Here's a text I got from him. 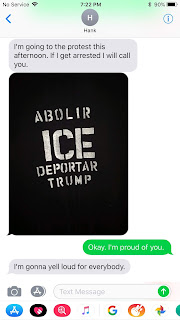 God, I love my children.
Just as every mother does.