I am making a supper tonight which is the sort of meal I love to cook and to eat. It is as simple as can be and part of it comes directly from the garden.
We'll be having focaccia with herbs and sun-dried tomatoes and cream of squash soup. The focaccia recipe comes from a Weight Watcher cookbook as many of my favorite recipes actually do. I make up the dough in the food processor and it's so quick and has a fast rise time and it's very, very easy. I double the recipe and use half whole wheat flour and half bread flour in it which does no disservice to it at all. And I throw sun-dried tomatoes in there too, the julienned ones, at the very end of the processing. I've also used slices of fresh tomatoes on top of it which have been pressed between paper towels to remove the juice. This can be the base of a sort of sturdy peasant pizza too, if you like.

The squash soup recipe came from the wife of a friend of my husband's and I do change it up a bit. It calls for half and half, for instance, which I would probably never use although I am sure it would be delicious. I substitute some canned low fat milk in it along with a bit of grated parmesan and instead of the chopped parsley it calls for I use some fresh thyme and oregano and I also use a little grated nutmeg in it because grated nutmeg is magic.

Here- riff on these and make them yours. 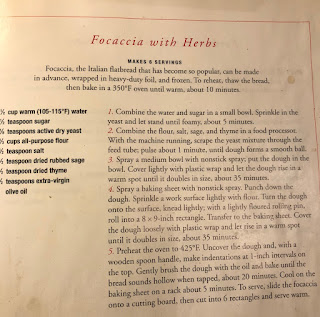 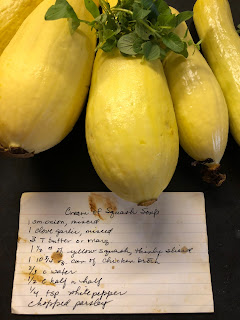 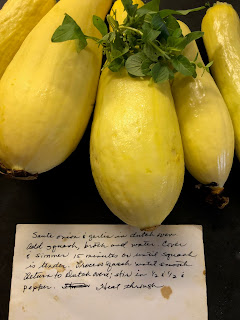 And by the way- I won't be using that much butter but will use a small amount along with some olive oil.
And we'll eat the warm bread with some goat cheese and olive tapenade.
And it will be lovely. 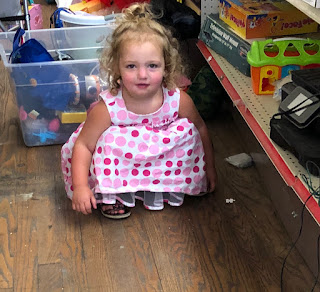 Lily and the kids and I drove to Monticello today to have lunch and shop at Wag the Dog, the thrift store which supports the humane society. They have a pretty full aisle of toys, many of which are missing entire working parts or pieces but Magnolia and Gibson both scored. The first thing Maggie did was to find a real baby stroller and then collect every doll she could find and strap and buckle them all into the stroller together. She's what I call a "project" baby. Jessie was one too. And Maggie's project today was to play with all the babies. She ended up with one doll and a little wagon thing that had to be missing some functional parts but which still worked as a wagon and she laid her baby in it and walked it carefully to the Mexican restaurant where we had lunch. If the baby started to slide out, she would stop and rearrange it, making sure that her doll did not hurt herself. She was very serious about this.
Owen didn't find anything he liked which caused some unhappiness. He did not want a puzzle or a game and of course the baby toys held no interest for him. He could not believe that Monticello has no Walmart, no Goodwill, no Target which we could visit for more toy hunting.
Ah. But it's true.
Gibson got a pirate costume which pleased him immensely. Here he is, wearing it in the restaurant. 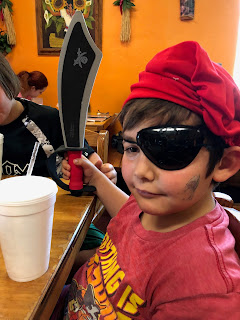 The sword fell apart soon after this picture was taken but Lily promised to glue it all back together.

I found some things I liked too. I got yet another copy of Keith Richards' autobiography, an old fashioned plug-in-the-wall landline telephone for when the power goes out, a beautiful tablecloth and matching napkins, and a pair of nice new-looking shorts for Mr. Moon. Oh! And a baby rattle for Levon. I gave the tablecloth and napkins to Lily and I'll give the Keith Richards' book to someone who needs it (yet to be determined) and Mr. Moon approves of the shorts.
All of this for less than twenty dollars, Gibson and Maggie's toys included.
How we love Wag the Dog!

And so that was what I did today. It was exhausting and when I got home I managed to take my clothes off the line before the rain came and de-pooped the hen house before I laid down and took a nap.

Here's a picture that Jessie sent me of Levon grinning his big old boy-child grin up on Black Mountain, North Carolina. 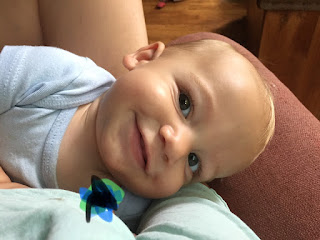 She colored out her nipple for decency's sake.
So yes. This picture has been censored.
She told me that Vergil had taken August swimming and she and Levon went to a coffee shop where a random stranger pointed out that Levon is Novel, spelled backwards.
How did we not know that? How perfect would it be if he grew up to write books of fiction?

And here's August after swimming. 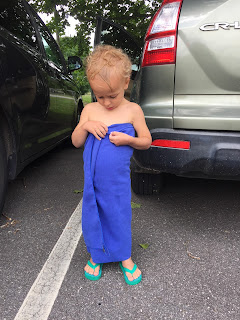 I love those little feet in those aqua flip-flops more than words can say.

I refuse to talk about the Supreme Court because I don't want to vomit.

Other than that, I'm just grateful for this good day and for the rain which came and cooled things off, for happy and healthy grandchildren, for squash from the garden, for a cool and soft place to nap in the heat of the day and the opportunity to lay down and rest, and for the mama cardinal chip, chip, chipping away at the feeder as she dips her beak to seeds and eats, blessing me with her song and her presence.